Ornette Coleman: Tomorrow Is The Question! | Longjohns and Wifebeaters - September 21, 2022

I'll second hiredfox's comments re. audio quality- exceedingly balanced and realistic even by SACD standards, a true pleasure to listen to, though it does need to be cranked ... 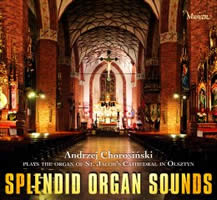 It is rare these days for a record company, whether large or small, to move from CD to high resolution recordings, but the Polish company Musicon, much to their credit, has done just that by releasing a clutch of seven multi-channel hybrid SACDs of organ music recorded between 2010 and 2014.

The aptly titled 'Splendid Organ Sounds' is a collection of pieces designed to illustrate the unique sound and capabilities of the organ of St. Jacob's Cathedral in the city of Olsztyn in north-eastern Poland. Some were written specifically for the organ by various composers whilst others are arrangements and transcriptions of works originally written for other instruments or instrumental combinations. They are played here by Professor Andrzej Chorosinski of the Frederic Chopin University in Warsaw.

The recital begins with Chorosinski's own tasteful transcription of 'La Primavera', the opening concerto of Vivaldi's popular 'Four Seasons' though some may find the playing in the outer movements lacking the exuberance and charm usually associated with this piece.
The romantic repertoire is well represented by fine accounts of César Franck's 'Prélude, Fugue and Variation' and the sixth of Mendelssohn's Organ Sonatas, a work based on the Lutheran Bach chorale 'Vater unser im Himmelreich' BWV 416. But perhaps the most imposing sounds from the much restored Olsztyn instrument are heard in the splendid four-movement 'Suite Gothique pour grand orgue' by Léon Böellmann and the lesser known, at least outside Poland, 'Improvisations on the Polish hymn 'Holy God” by Mieczyslaw Surzynski.

The final three items on this disc are Bach arrangements and transcriptions – the ever popular 'Air' from Orchestral Suite No. 3 in D major and restrained, though not especially distinctive, accounts of two of the most performed six Schübler Chorales.

The booklet states that the recording – made in May 2011 – is 24bit/96kHz 5.0 surround, but the output from my sub-woofer suggests that it is in fact 5.1. The acoustic of the imposing Olsztyn Gothic Basilica is excellently conveyed with praiseworthy focus and depth, and there is very little mechanism noise captured by the microphones. The attractive accompanying 24-page booklet provides details of the organ specification, photographs of the interior of St. Jacob's Cathedral and notes on the music in Polish, English and German.

Thanks to Musicon's fine engineering this enjoyable SACD provides a comprehensive demonstration of the wide range of tone colour that the Olsztyn instrument is capable of producing in music of different styles, and as such it can be recommended on both sonic and musical grounds. 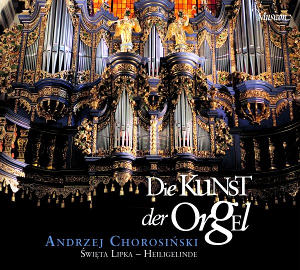