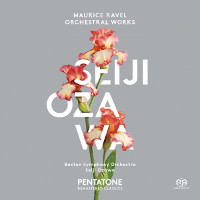 
The seeds were planted in the early 1970s when Deutsche Grammophon realised what amazing results could be achieved by recording the multi-channel tapes, with either four or eight channels. Yet, due to a few restrictions, they never fully blossomed. Flaws in the playback equipment meant that music connoisseurs were prevented from enjoying these recordings in the way that artists, producers, engineers and other professionals intended, even though recording technology was already way ahead of its time.

Now – over a quarter of a century later – thanks to the arrival of the multi-channel Super Audio CD, there is finally a system available which permits these precious recordings to be released in the quality they already deserved back then.

As a result of PENTATONE’s labour of love of re-recording and remastering this release, we get to witness and experience all of the images from different moods and places that Ravel intended to arouse with his impressionistic pieces. In this release, we are spoiled with his works such as Le tombeau de Couperin, Menuet antique, Ma mère l’oye, Valses nobles et sentimentales and Une barque sur l’océan. As Ravel is famous for his melodies, exquisite orchestration and imaginative instrumental textures, PENTATONE is equally known for its superior audio quality, and this handsome collection of orchestral works on SACD is surely one not to be missed.

I enjoyed this but it doesn't really come close to other performances I love, such as Boulez and Berlin doing Ma mère l'oye (also Une barque sur l'océan - DG SACD) and that old magician Munch and Philadelphia in Valses nobles et sentimentales (1963 - I have the Japanese Sony CD). Soundwise, too, at least in stereo, it's not outstanding - a bit of an analogue haze over things (and/or mic'd more distantly?). I can hear more of Ravel's subtle orchestral details in the other recordings mentioned, and they certainly have more emotional resonance. The Boulez was mastered from a 21-bit original (it was recorded in 1993 using the 4D system), and climaxes still sound a tad harsh.

"The Boulez was mastered from a 21-bit original (it was recorded in 1993 using the 4D system)" : source to that information please? I would be interest to read more about this.

I previously had the CD version and it's a 4D release, which is described in the booklets of that time as a 21-bit recording system (though they were striving to make it 24-bit), so that would be the original resolution of this recording. There is no technical info with the SACDs except for the new (2004) surround mix which is said to be 44.1/24 (presumably they up-converted the multi-tracks for that).

I listened just now to "Alborada del Gracioso", and through my Susvara phones the sound is quite clean, though the Jesus Kirche ambiance really kicks in on big climaxes. I remember the SACD sound as being a very worthwhile improvement over the CD.