Ornette Coleman: Tomorrow Is The Question! | Longjohns and Wifebeaters - September 21, 2022 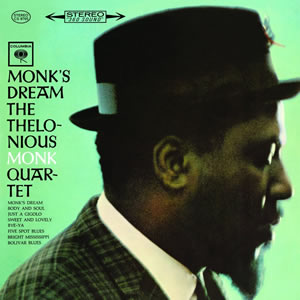 Monk's Dream, the first recording session for Thelonious Monk on Columbia Records, brought the veteran jazz composer-pianist out of the cultural margins into which he had been consigned for much of the previous two decades. The late October and early November 1962 sessions took place a few weeks after Monk's 45th birthday and marked the beginning of the last phase of a creative but obstructed career.

BACKGROUND
Born in 1917 in North Carolina, Monk emigrated to New York City, where his family settled into an apartment on the Hudson River, 263 West 63rd Street. The Monk family was to live in that building from the mid-1920s until 1981. In the years of the Harlem Renaissance, African-American musicians, writers, and artists worked within an economically thriving, self-supporting community of teachers, ministers, small business owners and city employees. Thelonious Monk and his family were beneficiaries of that flowering of African-American culture.

After completing high school, Thelonious pursued music professionally. A two-year stint with an itinerant evangelist's band brought him to Kansas City, where he heard the new sounds of Benny Moten and Count Basie. By 1941, Monk was the house pianist in after-hours sessions held at Minton's Playhouse in Harlem, the center of the nascent bebop scene. In a rhythm section with the modernist drummer Kenny Clark, he developed his own unmistakable sound: swinging, percussive, rhythmically idiosyncratic and harmonically sophisticated.

In the late 1940s, when his younger contemporaries Gillespie, Parker and Miles were recording and performing to acclaim, Monk remained on the margins: his conception was individualistic and his compositions were difficult for many musicians to understand, much less play. His indifference to the demands of the music business and his increasing dependence on alcohol made him unreliable. Alfred Lion signed him to Blue Note and recorded several sessions that received positive critical notices and are still regarded by jazz scholars as his most important recordings.

But an unlucky encounter with the NYPD, during which Monk momentarily held a small packet of heroin passed to him by his close friend, pianist Bud Powell, and Monk's subsequent refusal to identify either the possessor or supplier of the drug led to a punitive suspension of his cabaret license. (Monk had acted to protect Powell from police abuse: years earlier, during a nightclub performance by Monk in Chicago, Powell had argued with a policeman who was trying to shut down the gig and received a vicious baton blow that left him with traumatic brain injury.)

Without the cabaret license, Monk was barred from performing in the City's musical venues and couldn't earn a living for himself and his family, but he turned misfortune to artistic advantage; while his wife Nellie earned a paycheck, Monk supervised their children, wrote music and practiced, and mentored younger musicians who visited the 63rd Street apartment. Prominent supporters campaigned on Monk's behalf to get his cabaret card reinstated, and in 1957 he resumed performing in public. A quartet engagement at the Five Spot with John Coltrane, documented in Thelonious Monk with John Coltrane and a series of superior recording sessions on Riverside, finally brought Monk widespread attention, increasing popularity and critical respect.

MUSIC
At the end of his tenure with Riverside, Monk brought his working quartet into Columbia's spacious East 30th Street studios to record a selection of originals and chestnuts. Four of the eight tunes were previously recorded on a Prestige trio session ("Bye-Ya", "Just a Gigolo", "Sweet and Lovely" and the title tune); "Bolivar Blues" was recorded for Riverside in a longer arrangement ("Ba-Lue Bolivar Ba-Lues-Are" on Thelonious Monk: Brilliant Corners). Only "Bright Mississippi" was composed especially for the Columbia session. It was not a revolutionary set of compositions, especially in comparison to contemporary directions in jazz. By this time, Monk was revisiting and reassessing his earlier, innovative pieces; Monk's Dream should be taken as a summary of Monk's compositional and interpretative art, the product of three decades' assiduous work.

The quartet with Charlie Rouse, saxophone, John Ore, bass, and Frankie Dunlop, drums, had toured Europe the previous year and were very well-rehearsed with this material. Unlike Orrin Keepnews, who had assembled different rhythm sections and guest horn players on nearly every Riverside Monk session, producer Teo Macero understood the value in recording Monk with a regular working ensemble. Rouse especially was an asset and ally; he and Monk were acquainted as early as 1944, and though they did not begin collaborating until 1959, Rouse became Monk's longest-standing musical partner.

A technically proficient bebop tenorist with considerable performing experience, Rouse, more than any of the saxophonists who had previously played with Monk—Johnny Griffin, John Coltrane, Ernie Henry, Sonny Rollins—grasped the essentially melodic conception of Monk's music. To the claim that Rouse subordinated his own interpretative voice in order to function as Monk's horn, much in the way of Ellington's reeds players, it can be countered that Rouse broadened the scope of his conception by getting inside Monk's compositions, rather than just improvising over them.

"Monk's Dream" opens with the trio playing the head arrangement almost sedately, at a relaxed mid-tempo. Then Rouse enters unexpectedly into his solo, slashing away at the melody with dissonant intervals blended into swinging bebop lines. He doesn't so much imitate Monk as extend Monk into the horn's register. "Body and Soul" is re-harmonized to such an extent that it could almost be a Monk original. "Bright Mississippi" is performed with verve by the entire ensemble. Monk's furious two-handed solo is certainly one of the high points of his recorded output. Monk knows exactly what effects he wants to produce. There's no hint of hesitancy or indecision. That's what mastery of one's instrument means—the musical conception flows unhindered through the musician's fingers and the mechanism of the instrument straight into the listener's consciousness. If you're receptive, you'll "get" Monk without needing to analyze what he's doing.

SOUND
Original Recordings Group's primary activity is the production of limited-edition 45RPM double-LP sets. Their website and that of their distributor provides no information on the source used in producing this SACD. Statements posted on this site's predecessor, sa-cd.net, and other audiophile forums assert on the basis of aural evidence that this disc was mastered from the original master stereo tapes.

I believe those posters are correct. Mark Wilder remixed the Monk's Dream multichannel studio tapes for the 2002 Sony CD reissue, and that release clearly sounds different from the ORG SACD. The ORG SACD sounds analogue-like, slightly rolled off on the top, detailed and warm. But the provenance of the tape, the name of the remastering engineer, and the method of transfer to DSD are not included in the SACD liner notes or posted on ORG's website or their distributor's website, so your ears will have to be your guide.

When I put on the disc in preparation for writing this review, I planned to listen to one tune at a time, and break off for note-taking. Instead, I was so caught up by the compelling performance that before I realized, I had listened to the entire album straight through.