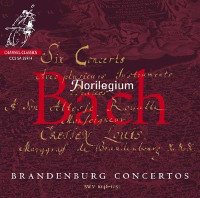 
In a strange twist of fate, the Brandenburg Concertos have come to be named after a man who didn’t especially want them, never heard them, and may not have liked them had he done so. Johann Sebastian Bach met Christian Ludwig, Margrave of Brandenburg in 1719 during his tenure as music director at the court of Leopold of Anhalt-Cöthen, who was the young prince responsible for signing up some of the musicians who were previously employed by Frederick William I. Bach worked at Anhalt-Cöthen from 1717 to 1723, and he and Leopold developed an excellent working relationship there. The Prince enjoyed travel, fine art and, above all, music, and he respected and encouraged Bach in his work, even occasionally participating in the court concerts as violinist, viola da gambist or harpsichordist. Provided by Leopold with an excellent set of instruments and a group of fine players (and the second-highest salary of any of his court employees), Bach enjoyed a fruitful period at Cöthen. Many of his greatest works for keyboard, chamber ensembles and orchestra date from those years.

Each new release from Ashley Solomon's versatile period instrument group Florilegium is always an exciting prospect. A glance at their extensive discography indicates the wide span of their musical interests ranging from Telemann, Vivaldi, Haydn, Couperin and even extending to three exciting volumes of baroque music from Bolivia.

It is therefore surprising to find that this is their first recording of one of the high points of Baroque instrumental music – Bach's Brandenburg Concertos.These six ever popular concertos have received countless recordings over the years and have been performed in many different styles, ranging from elephantine and definitely inauthentic performances of the past to the pared down period performances of more recent times. This new set from Florilegium obviously falls into the latter category, but thanks to Ashley Solomon's beautifully judged tempi in each of the six concerti and Channel's breathtakingly vivid 5.0 DSD recording made in the Church of St John the Evangelist, Upper Norwood, London in November last year there is a glow, richness and body to the sound that would be the envy of many orchestras.

In an interesting departure from the norm these six concertos are presented here not in the familiar order of the set as presented by Bach to Christian Ludwig, Margrave of Brandenburg in 1721, but in reverse.

As Ashley Solomon points out in his excellent booklet notes these concertos were never meant to be performed as a set partly due to the constraints of their widely differing instrumentation, so the order in which they are played is largely unimportant. The sequence chosen by Florilegium simply illustrates the increase in instrumental forces as we move through the concertos, from No.6 with its group of just seven strings to No.1– the grandest and most orchestral of the set – requiring a compliment of 13 players and instrumentation that includes oboes, bassoon, horns and piccolo violin as well as a quintet of strings and harpsichord continuo.

There is a natural unforced quality to the music making throughout this set that is immediately engaging, and listener's will surely be delighted by the virtuosity of the soloists whether it be Terence Charlston's flamboyant harpsichord solos in No.5, Richard Fomison's stratospheric trumpet playing in No.2 or the lovely recorder duo of Ashley Solomon and Elspeth Robertson in No. 4. To be fair though, the performances of all twenty one musicians heard here deserve the utmost praise.

The recording quality, as I have already indicated, is beyond reproach. Solo instruments are beautifully balanced with a wonderful sense of air around them and their spatial positioning within the sound picture is always perfectly defined.

The insatiable public demand for new recordings of the Brandenburg Concertos apparently seems unstoppable, but, in spite of fierce competition, this new release from Florilegium should be at the top of anyone's shopping list.