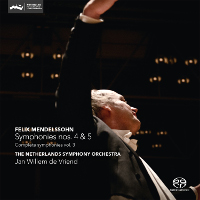 
There could barely be a greater contrast between Mendelssohn’s Italian and Reformation symphonies. The Italian: a fiery, vivacious Mendelssohn, a perfect illustration of his nervous and enthusiastic nature and a rousing romp through Italy. The Reformation: often solemn, with a clearly religious bias; a work that might even be referred to as a ‘monument’. But there is also a similarity. Mendelssohn never wanted either of these works to be published. Oddly enough, he was not satisfied with them. They came to be printed after the composer’s death. The composer’s symphonies are numbered according to their publication dates rather than chronologically by when they were written. ‘No. 4’, the Italian (written in 1833), was actually the third and ‘No. 5’, the Reformation (1830), the second.

The Italian is a real party piece. This was certainly the view following the work’s premiere in London on 13 May 1833, given by the Philharmonic Society. (Mendelssohn was highly acclaimed in London, where he had been commissioned to produce a new symphony).

The Reformation Symphony had its roots in quite different soil. In 1830, Germany was celebrating the 300th anniversary of the Confession of Augsburg. The Confession was a key document for Lutheranism, and its submission to Emperor Charles V in 1530 marked an enormous event for the Reformation, as Lutheranism became the official state religion. Mendelssohn wanted to make a contribution towards this national obeisance with a large-scale symphony. He incorporated two well-known Protestant melodies into the work.

Another winner. Jan Willem de Vriend did it again. It looks as though he has found the magic baton that lifts Mendelssohn’s symphonies at a higher level than we are generally used to. After a marvelous account of nos. 1 and 3, we have here 4 and 5 that can compete with the best and surpass many.

Comparing them with Litton and the Bergen Philharmonic is a real eye opener. They are good but not special; they are, indeed, ‘middle-of-the-road’ (Krisjan) and ‘lacklustre and hurried with a slightly undifferentiated sound’ (Hiredfox).

De Vriend is in a different league altogether: Whereas Litton pushes his forces at times beyond their technical limits (first and final movement 4th symphony), thus creating an ‘out of focus’ orchestral image, de Vriend holds his musicians under tight control, yet inspiring them with refreshing accents adding to a vividly colouring of the overall orchestral picture.

Several elements underpin the excellent quality of this disk. Firstly, the recording quality giving the listener real High Definition sound. Yes, it does matter. Individual sections and instruments are more clearly defined; the strings are precise and not harsh, the winds sound lively and articulate; the brass bites and the tympani rattle. Secondly, the quality of the orchestra, built and modelled over the last couple of years by its present chef into a formation with its own attractive sound. And last but not least, the positive inspiration of the maestro himself.

He ably steers, in a seemingly effortless way, his musicians through the for Mendelssohn so typical complicated countermelodies, while keeping the attention by cleverly shading, phrasing and building up tension, regardless of the pace in the various movements. He brings a kind of new life into the often too routinely played ‘Italian’.

The fifth symphony, the ‘Reformation’ (which is, in actual fact, Mendelssohn’s second), is in my view more difficult to bring across. It is basically a ‘festive societal’ composition incorporating the Protestant hymn ‘Ein feste Burg ist unser Gott’, marking the 300th birthday of Luther’s confession (excellent details to be found in the liner notes) and hence not entirely shaped from ‘within’ Mendelssohn’s musical spiritual world. Part of it and especially the closing movement can, in less capable hands, easily turn into a series of banalities. Not so with de Vriend and his Netherlands Symphony Orchestra. For me he is at par with Sir John Elliot Gardiner, but with vastly superior sound; both lifting this symphony out and above of its usual status of ‘occasional music’.

For completeness sake, it may be noted here that Musikkollegium Winterthur (MDG), although not eligible for comparison due to the different (second) version in a chamber rendition, provides an interesting, well played and well recorded alternative for Mendelssohn’s ‘Italian’ symphony.

I have no hesitation in recommending this disk.

I agree completely with Adrian (again!) - this is a superb disc and must be the current first choice for collectors. 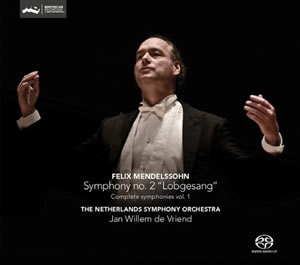 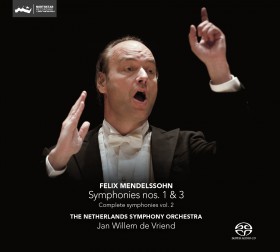