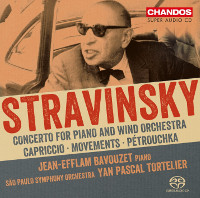 
After having won the Gramophone Award in 2014 for his recording of Prokofiev’s five piano concertos, the exclusive Chandos artist Jean-Efflam Bavouzet here explores the complete works for piano and orchestra of another Russian composer of the twentieth century: Igor Stravinsky.

Bartók’s Piano Concerto No. 2, Ravel’s Piano Concerto for the Left Hand, and Stravinsky’s Concerto for Piano and Wind Instruments make good company. First, Bavouzet considers them ‘the greatest concertos of the twentieth century’. Furthermore, he has recorded all of them for Chandos. Last, but not least, his recordings of the concertos by both Bartók (CHAN 10610) and Ravel (CHSA 5084) were shortlisted for Gramophone Awards in 2011 (‘Concerto’ category). The winner? The latter, which marked the first collaboration between Jean-Efflam Bavouzet and Yan Pascal Tortelier, a collaboration they resume on the present album.

The Concerto for Piano and Wind Instruments combines weighty statements with tender expressivity, but finishes with crisp games with rhythms, polyphony, and classical form. Stravinsky composed the Capriccio as a repertoire alternative to his concerto, which he performed more than forty times in the first four years after its creation. The twelve-tone idiom of Movements represents Stravinsky’s experiments in the use of serial techniques.

Pétrouchka involves a prominent part for piano, except that it here is not a solo instrument but rather part of the orchestral fabric. Bavouzet had long wanted to play the part and has described the effort to blend into the fortissimo of the full orchestra as ‘one of the best musical experiences of my life’.

This collection of Stravinsky's works for Piano and Orchestra is a most welcome release as it includes three comparatively neglected works from the composer's output as well as one of his most popular.

Both the 'Concerto for Piano and Wind Instruments' and the 'Capriccio for Piano and Orchestra' were composed in the 1920s as vehicles for Stravinsky's own performances as a pianist. The composer once described the Concerto (composed 1923-24 and revised in 1950) as being “in the style of the seventeenth century viewed from the point of view today” and the combination of piano with winds, brass and timpani produce some striking sonorities. Jean-Efflam Bavouzet, a pianist who has made award winning recordings of both the Bartok and Prokofiev Piano Concertos, brings his formidable technique to bear in this complex piece. His playing is both incisive and alert while the excellently balanced Chandos recording ensures that the considerable power of the wind body never obscures the piano lines.

The 'Capriccio for Piano and Orchestra' appeared in 1928-29 and is such a delightfully witty piece that its relative obscurity is hard to fathom. Like the Concerto it is in three movements and following a stern couple of opening bars it quickly adopts an insouciance worthy of Poulenc. The second movement has an almost baroque feel and includes a cadenza in which the piano mimics the cimbalom – an instrument whose sound Stravinsky much enjoyed. The final sparkling 'Allegro capriccioso' beguiles us from start to finish. Jean-Efflam Bavouzet brings a Gallic lightness of touch to this work and he is nimbly accompanied by Tortelier and the players of the fine São Paulo Symphony Orchestra.

Stravinsky's interest in serial or dodecaphonic music first manifested itself in the 1950s in works such as 'Agon' and the 'Canticum Sacrum'. But in 1959 he embraced it fully when he wrote the apothegmatic 'Movements'. This came about as a result of the commission that he received from a Swiss tycoon for his wife, the pianist Margrit Weber, who gave the first performance, with Stravinsky conducting, in January 1960 and later recorded it with Ferenc Fricsay. The piece is in five short movements that together last a mere 9' 19”, and the clarity and precision of Bavouzet's committed performance does justice to the intricacies of this challenging cerebral composition.

Stravinsky's ballet 'Pétrouchka' was originally conceived as a 'Konzertstück' for piano and orchestra, so its appearance here as a fill-up to the other three works is both an apposite and a generous one. Tortelier's is a generally sprightly account of the score – given in Stravinsky's 1946 revision of the ballet rather than the more exotically scored version of 1910 – though a touch more exuberance in the latter parts of the work would not have gone amiss. The brilliant playing of Bavouzet in the Shrove-tide fair and Danse russe sections of the score certainly adds great character to the performance and his spicy interaction with the fine wind players of the São Paulo Symphony Orchestra in Part 2 is most engaging. One minor disappointment was that the clashing cymbals throughout the opening of Part 3 – The Blackamoor – are too distant, though elsewhere the recording is vivid and, as I have already indicated, well-balanced.


Altogether this is a most enjoyable SACD that will further undoubtedly enhance the reputation of Jean-Efflam Bavouzet as one of today's most compelling performers.