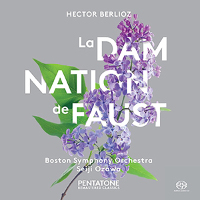 
Digitally re-mastered on 2 SACDs, this PENTATONE release also features a complete libretto both in French and English.

The re-mastering and re-release on SACD bears witness to a perfect blend of the past and present, just as Hector Berlioz combined it in La damnation de Faust. He told the story in a fascinatingly modern manner - so modern, that we are able to translate for our ears the extreme paradoxes of drinking song and fugue, rides to hell and heavenly apotheosis, prayer and march, into colourful, dramatic images and let our imaginations run wild.

This is the first recording of Berlioz's 'La Damnation de Faust' to appear on SACD and it represents a remarkable improvement on the previous LP and CD releases of this 1973 set. For this remastering PENTATONE have used the original 4.0 channel quadraphonic Deutsche Grammophon tapes which have been expertly remastered by Polyhymnia to produce a pretty spectacular realisation of the work – one that sonically, at least, does full justice to the composer's description of the piece as a 'Légende dramatique'.

The recording was taped in October 1973 shortly after Seiji Ozawa had been appointed as musical director of the Boston Symphony Orchestra in what might be described as the honeymoon period of the long relationship between this conductor and his orchestra.

Ozawa goes for visceral excitement and fast speeds in his account of the score revelling in the magnificent orchestral playing of his virtuoso orchestra. He frequently ignores Berlioz's tempo directions and presses forward whenever possible. One such example is the celebrated 'Marche Hongroise' which begins steadily and then gradually accelerates to a barnstorming conclusion. This approach, though undeniably exciting, is the antithesis of that adopted by Colin Davis on both of his recordings (Philips and LSO Live). Davis illuminates passages in the work that Ozawa merely glosses over in his eagerness to maintain the momentum of Berlioz's masterpiece. Having said that, Ozawa's accounts of the other famous orchestral sections – the 'Ballet des Sylphes' and 'Menuet des Feux Follets' are crisply pointed and delightfully characterful.

When it comes to the soloists Ozawa has a trump card with Stuart Burrows in the role of Faust. His elegant phrasing and legato singing matched with excellent diction hold one's attention throughout. He conveys the character's world weariness at the work's opening “ Le vieil hiver a fait place au printemps” and he delivers the Invocation to Nature “ Nature immense, impénétrable et fière” with rhapsodic power and nobility. The Méphistophélès of Donald McIntyre, a singer who later became celebrated for his roles in Wagner, is also most impressive. His legato singing is perhaps less secure, but few will be disappointed with his vivid characterisation. Edith Mathis sings most beautifully as Marguerite, a role more often assigned to a mezzo soprano. She brings refinement and beauty of tone to both her big arias, seemingly unfazed by Ozawa's fast tempo for 'Le Roi de Thulé'.

The full-throated choral singing from the large Tanglewood Festival Chorus whether as peasants, soldiers, students or demons is especially thrilling, and though their words are often lost in the reverberant acoustic of Symphony Hall their enthusiasm is palpable.

The two SACDs come packaged within a hard-backed book that includes notes on the work and the French / English libretto in readable type.

I have left the best for last – the use of the surround sound.
All four channels are used, not just for ambient information, but to convey the movements of the, characters, various choral groupings and off-stage brass etc., in order to provide a convincing realisation of what is essentially a cinematic work for the imagination.

Those listeners with a surround sound set-up will assuredly be most impressed.

This album offers an demonstration quality of the quadraphonic sound.
The all four channels create an awesome 360-degree surround sound. Above all, the original analogue recording is masterfully digitalized to DSD (Direct Stream Digital). A pure delight for modern ears, then.
It can be only hoped that PENTATONE will release more opera recordings in the future. How about Beethoven's "Fidelio" (Wiener Philharmoniker, Bernstein) and its offstage trumpet? Or Verdi's "Rigoletto" (distant military band)?

PS. This was my first Remastered Classics album. I will collect this year's upcoming Philips reissues, as well.

This rainy day, I listened to this recording. I also listened to the L'Enfance du Christ, Chandos, Andrew Davis conducting. Berlioz: L'enfance du Christ - Davis
I have begun to hear A Davis's recording of Roméo & Juliette as well. Also Chandos.
Berlioz: Roméo et Juliette - Davis
And I wonder: Why does not recording companies as Chandos and Bis (who thankfully still releases 5.0) use the possibilities to add more instruments/choirs/soloists to the back channels? Is to provide a "concert house experience"? If so, I'd rather go the concert house. When I buy a SACD, plastic or digital, I want the sound to be immersive, the full mounty.
This 70's Ozawa recording beats the other mentioned ones totally sonically. In my opinion.

I think it depends on the composition; BIS used "surround" for one of the Aho symphonies that have spatially dispersed musicians.

Most compositions from Classical to C20 are typically scored for a "concert hall" configuration, so it's more the cori spezzati of the Renaissance/Baroque eras or some of the more spatially dispersed C20+ compositions where we may expect to hear such.

Utilizing rear channel speakers for discrete instruments/voices is a matter of preference. Sitting with the band was very popular among artists in the early days of SACD but it's favor has died out. I suspect that most prefer the "audience" perspective (mastered to put the listener several rows back in the orchestra and all direct sound comes from your front speakers). Mark Waldrep at AIX Records offers both "audience" and "conductor" perspective of the same recording, your choice. Personally, I don't mind "conductor" perspective but almost all of my Surround music is audience perspective. I asked Brenden Heinst of TRPTK how he masters the many "chamber" recordings he produces. He replied that he uses audience perspective.

By the way, I own the Rattle performance of (Berlioz: La Damnation de Faust - Rattle). It is superb. 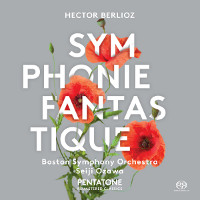