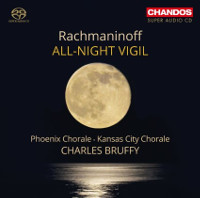 
The Grammy-Award-winning conductor Charles Bruffy brings together his two professional choirs, the Kansas City Chorale and Phoenix Chorale, for this recording of Serge Rachmaninoff’s All-night Vigil. The scheduled release date marks the 100th anniversary of the world premiere of the work, which was given by the Moscow Synodal Choir on 10 March 1915.

The recording follows live performances of the work by the combined ensembles in April and May 2014, respectively in Phoenix and Kansas City. The Phoenix Chorale and Kansas City Chorale are regarded as among the finest professional choral ensembles in the world. Their recordings have earned a combined total of ten Grammy-Award-nominations and four wins. Building on the success of previous collaborations, the performances marked the seventh time that the two choirs have performed together. Of their 2009 performance at Alice Tully Hall in New York, Vivien Schweitzer of The New York Times wrote that the choirs ‘performed with a buoyant pulse and energetic finesse’, and praised ‘the choirs’ refined sound and elegant phrasing’.

In 1915, Rachmaninov wrote "I composed my Vesper Mass very quickly; it was completed in two weeks. The impulse to compose it came to me after hearing a performance of my Liturgy, which I did not like at all". This alone is a remarkable achievement, but the perfection of style in the new piece must surely have resulted from many hours of careful thought; and his masterly setting of the All Night Vigil (to give its correct name) was immediately successful with its listeners from a post-wartime Moscow.

In the Russian Orthodox Church, Vespers, Matins and First Hour (movement 15) were concatenated into a service lasting about three hours, rather than all night. Rachmaninov further shortened it somewhat by setting only those items which were always heard, not those which varied on a weekly basis. There are 15 movements, comprised of psalms, canticles and hymns. According to clerical expectations, a number of these are grounded on ancient Znameny chant as well as several others, less well-known. Elsewhere, as in his 'Liturgy', Rachmaninov devised what he called "a concious counterfeit of the ritual", i.e. building his music by expanding, exploring and producing variations of the chants. Perhaps some of the older clergy regarded this non-church component as pastiche, but general opinion from the first performance in the Great Hall of the Nobility, Moscow, sung by the Synodical Choir, was that the All Night Vigil was profoundly contemplative and deeply moving. Today it is held to be one of the most powerful sacred works in all music.

As well as it being a liturgical piece, Rachmaninov realised that his Vigil could also be performed in concert halls as well as Russian Orthodox Churches, so there are broadly two types of execution which may well affect the choice of buying a recording. Orthodox church performances themselves may be fully liturgical, with a Slavonically trained choir and rituals managed by priests, or be performances from Rachmaninov's score alone by a Slavic choir in a concerted setting. An Orthodox Church, which architecturally contains a host of niches and side areas with high domed spaces, is also decorated with textiles, gold-laden art and wooden casing, all of which produce a large, lively and complex reverberation.The choral sound made in Orthodox churches is thus distinctive. However, recordings made in Western studios, small churches and concert halls are acoustically plainer, which in turn affects the sound production of the choir and offers a different choice for the collector.

Written for unaccompanied mixed voices (although a list of performances from 1934 includes "Boys and Men's Voices" - perhaps from monasteries), this free-flowing work has a basic tension between ascetic purity and dark richness. Some of the longer movements, such as 'Blessed is the Man', 'Blessed Art Thou O Lord', 'My Soul doth Magnify The Lord' and 'The Great Doxology' are fully-worked compositions of great wealth and strength, constructed with remarkably pure melodies and a novel range of choral textures (including humming) which tax the abilities of every choir.

A feature of Slavonic choirs is their training in voice production, which pitches the voice at the point in the mouth where soft and hard palettes meet. When pitched correctly, this produces many overtones which give the characteristically vibrant, emotional sound. Another feature of these choirs is the Basso Profondo (oktavists in Russia), which are able to produce notes as low as F2 ) with powerful and resonant overtones. Rachmaninov uses an even lower note (B flat 2, below C two octaves below middle C) in the 'Nunc dimittis' which is reached by the basses by going slowly down the scale, at the same time making a diminuendo to a mere whisper. This, and other bass parts by Rachmaninov in his Vigil require bass voices of rare quality and intensive training.

On this Chandos recording, two of America's greatest professional mixed voice choirs, the Phoenix Chorale and the Kansas City Chorale came together to tackle this glorious Rachmaninov work which has many pitfalls. They are guided by Charles Bruffy, whose skills as a chorus-master needs no introduction, and who has worked many times with each choir. Their chosen venue is the Cathedral of St Peter the Apostle, Kansas City, a rather small Cathedral, judging from the booklet's session photograph with the 56 singers present. It still produces quite a generous and likeable ambience, but only just contains the choir's high volume when at fff levels.

The choir is well-balanced (12/13/15/16), with an enlarged bass which makes a rich sound not far from that of the Russian oktavists. Soloists are choir members, and are admirably idiomatic. The basses amalgamate very well with the other singers, with rounded beauty of tone as their dominant feature (compare Slavonic basses, which have a more authoritative sound). Bruffy takes a broad overall tempo which never seems slow, thanks to beautiful phrasing and following melodies through the web of 8 part sections. A unanimous, firm attack delineates the music's structure very helpfully. Rachmaninov, however, interpolates surprisingly rapid speed changes in his score, often with sudden build-ups to FFF dynamics. Russian performers use these exciting surges of dynamics and speeds to strengthen the religious and emotional fervency of their performances. While Bruffy's approach, for me, doesn't really activate the Slavonic urgency of Mankind to appeal to its God, his pacing has more time to show exquisite musical detail and get down emotionally into the depths of the score. It certainly seems to me to be one of the relatively few excellent "Western" All-Night Vigils.

One considerable problem for every Western Choir: learning Church Slavonic. While I'm not even close to understanding this language, the compounded choirs sound quite convincing, and I presume in such a professional venture that both choirs would have been involved in language coaching from teachers, although none are named in the booklet. In connection with the booklet, there is one black mark in the Chandos presentation; the All Night Vigil's text is printed in Cyrillic instead of the usual transliteration, where anyone can follow the singers and at the same time see the translation in English.

Chandos has provided a splendidly engineered recording of the Vigil which in musical terms speaks for itself as an important disc for any collection.

Please advise, was this recorded in DSD by Sound Mirror?

John, which of the Vigils would you recommend, this or the earlier Harmonia Mundi release? Advice sought pleas.

To me the Bruffy performance stands apart from Rachmaninov: All-Night Vigil (Vespers) - Hillier#, Rachmaninov: All-Night Vigil (Vespers) - Klava, and the old Melodiya Sveshnikov recording. Those other three are generally swifter with rougher-edged (more Slavic?) diction. This recording is far more magisterial and reflective, though the dynamic range of the combined Kansas City and Phoenix forces is at least the equal of any of the others. Bruffy's basses are very present (perhaps there are more of them). If you want traditional, go with Hillier (his recorded sound is very good - on par with Bruffy without as much sense of a spacious acoustic), but Bruffy really is a must-have for me as an alternative choice.