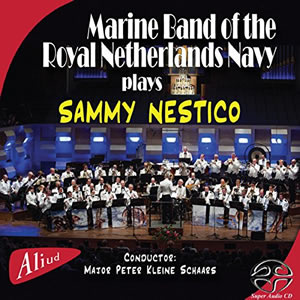 
Sammy Nestico received a Bachelor’s degree in music education from Duquesne University in 1950, and has since then received an honorary Doctor of Music degree there, as well as numerous awards. He has been a professional music arranger since 1941, when he became a staff arranger for ABC radio station WCAE in Pittsburgh at age 17. During his career, he arranged music for the Count Basie Orchestra (1967–1984), the US Air Force Band (15 yrs) and the US Marine Band (5 years) both in Washington, DC. In addition, he played the trombone in the big bands of Tommy Dorsey, Woody Herman, Gene Krupa, and Charlie Barnet. During his long career in the television and fim industry, he has arranged and conducted projects for artists such as Bing Crosby, Sarah Vaughan, Frank Sinatra, Phil Collins, Barbra Streisand, Count Basie, and many others. As orchestrator, he has worked on nearly seventy television programs, including Mission Impossible, Mannix, Charlie’s Angels, and The Mod Squad.

Never heard of Sammy Nestico? You almost certainly have - heard his work, that is. Nestico has had a long career in the musical industry as a professional music arranger from 1945, for the Count Basie Orchestra, the US Air Force Band, US Marine Band and others, as well as playing trombone in
the big bands of Tommy Dorsey, Woody Herman, Gene Crupa and Charley Barlet. He was also well into the TV and film industries, arranging or composing for Bing Crosby, Sara Vaughan, Phil Collins, Barbra Streisand, Count Basie and many others. As an orchestrator, he has worked on nearly seventy film and television programmes, including Mission Impossible, Mannix, Charlie's Angels and The Mod Squad.

Major Peter Kleine Shaars became Conductor of the Marine Band of the Royal Netherlands Navy in 2014. In his foreword of the booklet, he tells us how, when preparing for the audition of the conductorship, he contacted his music idol Sammy Nestico in the US and requested permission to instrumentate two of the Nestico pieces so they could be played at his audition. Permission was granted by Sammy, who passed 90 in 2040. Shaars got the job, and the first project as conductor was to produce a CD full of Nestico's arrangements and compositions. Peter Schuller, a fellow trombonist and assistant to Nestico, took over the job of making new instrumentations of each item specifically for the Netherlands Marine Band.

For recording, Power Sound of Amsterdam first captured the rhythm section and soloists in their Amsterdam Studio, then the full 53 musicians of the Marine Band were recorded in Studio 1 of the Netherlands Broadcasting Music Centre, chosen for its superb acoustics. Using native DSD, I can vouch for the final mix in 5.1 multichannel showing off a staggeringly open and opulent sound, with a wide stage and sharply focussed front to back perspective, into which the "spot" instruments are placed perfectly. Maybe I'm getting jaded in HIRES listening, as I haven't encountered a recording of demonstration value for some time. There is no doubt that THIS recording is of Demonstration value. Upper harmonics and body resonances, of which there are many from the brass, are cleanly reproduced without distortion, and the characteristic attack harmonics for each instrument group are similarly captured. The sheer thrill of hearing the massed trumpets and trombones produces a flood of adrenalin!

Comparing the Stereo track to the Multichannel track, Stereo is flatter in perspective as expected, but also is missing a noticeable amount of the interaction of the instruments with Studio 1's contribution of rich reverberations. However, listening to Stereo alone, it still is an excellently recorded image, given its limitations to two speakers only.

Looking at the list of tracks, you will find a sumptuous set of items from a wide range of styles worked in by Sammy Nestico, instrumented by his assistant, Peter Schueller, whose ingenuity and skill in providing the Marine Band such rewarding scores is remarkable. This disc is an encyclopaedia of jazz, swing, Scottish and Irish Ballads, film music (including a salute to Disney), Blues and light music itself. Wonderfully played, superbly recorded and exciting to listen to, it introduces Sammy Nestico's lifetime of entertainment "in the background" to those who didn't know his name.

As regard to this recording, Sammy has the last word himself:-

"In all my 75 years in the music field I have never heard a symphonic band perform a variety of music with such perfection. The musicianship and engineering are flawless. Thanks to a superb effort by Peter Kleine Schaars and the Marine Band of the Royal Netherlands Navy, this "once in a lifetime" recording encompasses marches, concert music and Jazz, making all those years worthwhile. With much love, this recording is our combined gift to the world of music."
Sammy Nestico.

A disc which anyone can enjoy, recorded in sonics which are thrilling. So march to your suppliers and get a copy.