Let’s get back to the music in question, Faust. I am fascinated by the story. We all have our dark moments of despair in life. Some may choose suicide; Faust certainly was ... 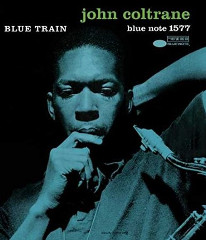 Every Sunday in San Francisco's Fillmore district, the Saint John Will-I-Am Coltrane African Orthodox Church proclaims the musical liturgy of its patron saint, before gold-leaf-decorated icons depicting him with tenor and soprano saxophones. For the members of the church, Coltrane embodied the will to overcome and transcend the snares of alcohol and drug addiction, his passing at age 40 a kind of modern martyrdom.

In the decades since John Coltrane's untimely death in 1967, his recordings have been remastered, repackaged and reissued on LPs, cassettes, CDs, SACDs, Blu-Ray discs and downloads. The music is valued not only for its artistic accomplishment but as a commodity. Original LP pressings of Blue Train command four figure prices at auction, and each time jazz collectors acquire new reissues of his recordings, we tip the balance of valuation further towards the monetary side of the art/commerce scale.

Acknowledging the sacrifices made by John Coltrane along the road that led to Blue Train can help to rebalance the scale on the side of art.

BACKGROUND
John Coltrane, the only child of hard-working, economically aspiring parents, was raised in the African American community of High Point, North Carolina. During his twelfth year, in the span of a few months he suffered the catastrophic loss of his father, maternal grandfather and grandmother, which left the surviving family members in straitened financial circumstances. As his mother struggled to keep them out of poverty, John withdrew into a lifelong and often solitary obsession with music.

He practiced constantly, first the clarinet and later, the alto saxophone. Driven north in search of better-paid work, the Coltrane family relocated to Philadelphia, where John completed high school and was exposed to the musical revolution of bebop. A year's service in the US Navy included practice sessions with a group of like-minded musicians. An amateur 78 recording of that group playing Charlie Parker and Nat Cole tunes found its way to New York City, to the trumpet player in Charlie Parker's quintet, Miles Davis. Miles heard something distinctive in Coltrane's sound, even at that very early stage in the saxophonist's development.

On his return to Philadelphia, Coltrane resumed a disciplined regimen of practice and study. He attended classes in music theory and saxophone technique at the Granoff Conservatory; connected with the burgeoning Philly jazz scene; and pursued his own studies of harmony. In Coltrane's musical conception, there were no hard boundaries between classical, jazz, and popular vocal music; he endlessly discussed, analyzed, practiced and wrote sketches based on themes from contemporary classical composers, especially Bartok and Shostakovich, jazz tunes and pop ballads. He practiced from tattered copies of classical piano method books that he borrowed from friends. The horn was never out of his hands.

Brief stints with Dizzy Gillespie and Eddie "Cleanhead" Vinson in 1948-49 should have brought Coltrane to the attention of his peers and steady employment, but his professional trajectory was slowed by heroin and alcohol abuse which often made him unreliable. He labored on for the next six years, playing shorter or longer engagements with various jazz and rhythm and blues groups. It was one of the slowest developments in the career of any jazz musician of similar stature. Shy and introvert by temperament, solitary by habit, Coltrane used substances to focus his attention on the mysterious language of musical harmony to the exclusion of practical considerations, including professional advancement. But by 1955 Coltrane was no longer just another devotee of Lester Young or a copyist of Dexter Gordon or Wardell Gray, as he had been since his teens. In the shadow of the jazz world, he was beginning to express his own unique sound. The hand that pulled Coltrane out of obscurity was extended by a musician who needed to hear that sound as badly as Coltrane needed to create it.

ARRIVAL
Miles Davis, clean after years of heroin abuse and eager to regain his prominence in the scene, was assembling a new working quintet for engagements and recordings. His chosen pianist and drummer, Red Garland and Philly Joe Jones, were from Philadelphia; they urged Miles to hire Coltrane. Miles had some justified reluctance. Coltrane's heroin use (like Philly Joe's and Garland's) and his relative lack of progress after so many years spoke against him. But that sound! Miles made the call. Coltrane moved to New York and immediately fell under the spotlight that followed Miles everywhere. The path to his major work lay straight ahead, though not without pitfalls and obstacles.

Two years of performing and recording with the Miles Davis Quintet brought Coltrane critical attention, some supportive, but much of it pejorative: he didn't swing like Sonny Rollins; his solos sounded like he was still practicing. While Coltrane was beginning to acquire an audience who came to Miles' gigs especially to hear him, Miles was growing dissatisfied with his continuing heroin use. At the end of a Café Bohemia engagement in April 1957, Miles fired Coltrane and Philly Joe.

THE MUSIC
Coltrane credited his transformation from the hesitancy shown in the October 1956 Prestige session (Miles Davis Quintet: Cookin' with the Miles Davis Quintet) to the confidence of the Blue Train date, to a personal religious awakening that prompted his recovery from heroin addiction and alcohol abuse. His wife Naima gave him the emotional and spiritual support that had been missing all the years he'd spent struggling to survive. He kicked heroin without medical treatment and foreswore alcohol use in May 1957. A session for Prestige (John Coltrane: Coltrane (Prestige 7105)) documents the immediate and noticeable improvements in Coltrane's playing after he stopped using drugs.

Committed to advancing his harmonic language, Coltrane spent the following months working intensively with Thelonious Monk. Coltrane's obsessive commitment to harmony study resonated with Monk, as did their shared North Carolina origins. They sat together at Monk's piano nearly every morning, and played music night after night at the Five Spot Café, spinning theory into tapestries of sound. Fellow musicians, writers and artists who flocked to the Five Spot during that summer described the music as revelatory. A studio session recorded on August 13 for Riverside (Thelonious Monk with John Coltrane) offers a glimpse of that phenomenon.

THE SESSION
Blue Note Records chief Alfred Lion offered Coltrane an opportunity to record his own compositions, choose his preferred musicians and rehearse at Blue Note's expense. Coltrane selected two players on Blue Note's roster, the rising young trumpet player (and fellow Philadelphian) Lee Morgan and pianist Kenny Drew, trombonist Curtis Fuller, and the rhythm section of the Miles Davis Quintet, Philly Joe Jones and bassist Paul Chambers. Blue Train was recorded in a single session at Rudy Van Gelder's studio on September 15, 1957. Throughout the session, Coltrane improvises fluent melodic lines across the full range of his instrument in a seemingly effortless display of virtuosity. Following the opening bars of the title track, with its stately proclamation of the blues, Coltrane launches into a solo that breaks out from the conventions of bebop vocabulary. The synthesis of blues and advanced harmonic structure—stacked fourth intervals, rapid variations on short motives—and the broken rhythms and unexpected off-beat rests inspired by Monk place Coltrane's soloing outside the mainstream of contemporary jazz. His original compositions, including "Lazy Bird" and "Moment's Notice", established Coltrane's credentials as a creator of new music, not merely an interpreter.

19 year-old trumpet player Lee Morgan, who had just done an outstanding session (City Lights) for Blue Note, plays with an assured, brassy tone with roots in the big band era. He's clearly listening to what Coltrane is doing: in his solo on "Moment's Notice" in the second chorus, he uses rhythmic patterns and motivic variations characteristic of Coltrane, woven into a well-conceived bebop framework. Morgan is the opening voice on the ballad "I'm Old-Fashioned", playing with restraint and subtle lyricism. Trombonist Fuller adds darker brass hues to the ensemble passages and contributes thoughtful, if not adventurous, solos. The underappreciated pianist-composer Kenny Drew, whose failure to connect with a wider audience in the US led him to join the expatriate exodus to Europe, supports Coltrane with vigourous comping. Drew settled in Copenhagen, where he performed regularly and recorded for the Steeplechase and Storyville labels.

RECORDED SOUND
The High Fidelity Pure Audio Blu-Ray disc was remastered from the original analogue master tapes by Alan Yoshida, bonus tracks remastered by Robert Vosgien. An article on the London Jazz Collector website cites Rudy Van Gelder and Kevin Gray on RVG's practice of preparing masters for the Blue Note label. At the time of the Blue Train date, RVG was recording all Blue Note sessions on a two-channel tape recorder. The selected master takes were cut with a razor blade from the two-channel session tape and spliced in sequence onto a "master" reel that was used to cut both the stereo and monaural LPs. The master is therefore the same physical tape used in the session, not a mix down or a copy.

Mastering engineer Alan Yoshida, who was responsible for the high sound quality on JVC XRCDs and Audio Wave XRCDs, is a member of the UME/Blue Note team for the Blue Note 75 series of remasters. Yoshida has intimate familiarity with the Van Gelder sound, and the approach he takes to mastering, though not identical to that of Kevin Gray, has equal merit. Philly Joe's drum kit is set well back from the horns; Paul Chambers' bowed bass has clarity and dimension. RVG mic'd Kenny Drew fairly closely and gets a somewhat better than usual piano sound than on other recording dates from the same period. The excellent condition of the nearly 60 year-old tape shines through in the transfer to 24/192 resolution. When Van Gelder fiddles with the plate reverb signal at the beginning of Curtis Fuller's trombone solo in "Moment's Notice", the level adjustment is startling—and amusing to hear.

For this review, I listened to the 24bit/192kHz LPCM audio track on an Oppo BDP-95. In an A/B comparison, the Blu-Ray and the Analogue Productions SACD (John Coltrane: Blue Train) both present the music with detail, warmth and clarity. The Blu-Ray reveals a bit more low bass and clearer channel separation, typical of Yoshida's remasters. Listening is a subjective process and different listeners may have preferences between the two versions, but both are recommendable. The HFPA disc has two additional bonus alternate takes. The liner notes include Francis Woolf's black and white photos, very well printed.

Blue Train was a landmark, but far from John Coltrane's ultimate musical destination. It firmly established his credentials as a composer, arranger and session leader, and justified the high estimation of his musical abilities that Miles Davis and Thelonious Monk had long held. 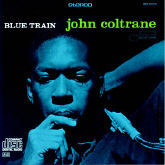 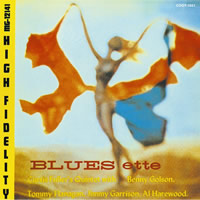 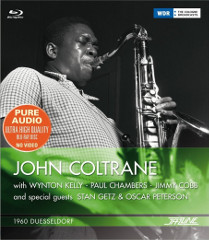 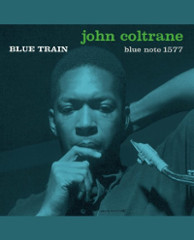 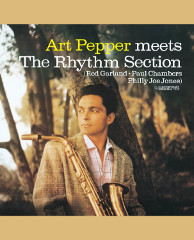