Rachmaninov: Variations on a Theme of Corelli, Etudes-Tableaux, Preludes - Besalyan 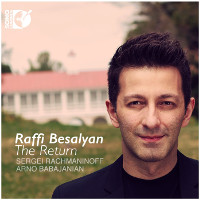 
Thoughts of home dominate much of the music Raffi Besalyan performs here. Rachmaninoff’s "B-Minor Prelude" was inspired by The Return, a painting by Arnold Böcklin, and although it was written before his emigration the work was a constant companion in his exile, a favorite for his own recitals and a reminder of his years in Russia. Similarly, the folk-inspired piano music of Arno Babajanian recalls a distant homeland. Based in Moscow for much of his adult life, Babajanian looked back to his native Armenia in music that mixed the folk idioms of his people with the virtuosic pianism of the Russian school. And now Besalyan, an Armenian pianist based in the United States, brings their music together in a program infused with warm memories, evocations of far off places, and reminders of earlier times.

Both Rachmaninoff and Chopin can be heard as influences in the music of Arno Babajanian. His studies in Moscow from 1938 exposed the Armenian composer to a wide range of styles, and the greater political freedom of the Khrushchev period when he began his professional career in the 1950s allowed him to explore many of these ideas in his works. The "Piano Trio in F# Minor", written in 1952, established his credentials as a composer of concert music, but he was also well-known for his cinema work, and particularly for the title song he wrote for the film Song of the First Love released in 1958. The four works presented here demonstrate how Babajanian was able to incorporate aspects of Armenian musical identity into the Russian piano idioms he had become acquainted with through his studies in Moscow. The line of inheritance from Chopin via Rachmaninoff is evident in the “Prelude”. The slow movements of Rachmaninoff’s concertos are reflected in the “Melody” that follows. “Elegy” was written towards the end of Babajanian’s life in 1978, composed in memory of fellow Armenian composer, Aram Khachaturian. The final work in the program, “Vagharshapat Dance,” is an early composition dating from 1947. It is one of Babjanian’s most popular works, skillfully infusing distinctively Armenian colors with an approach to piano figuration inherited directly from Rachmaninoff.

Armenian-born American pianist Raffi Besalyan made his formal New York debut in Carnegie Hall after winning the Artists International Competition, and was subsequently invited to perform at Merkin Concert Hall on the Artists International “Outstanding Alumni-Winners” series. Most recently Besalyan made his Chicago debut in famed Orchestra Hall at Symphony Center as the featured Guest Artist for the Chicago International Music Festival and was also interviewed by Wisconsin Public Radio’s Norman Gilliland on “The Midday”. Raffi Besalyan has established an international reputation as a magnetic and passionate performer. Active as a recitalist, orchestral soloist, and chamber musician, Besalyan appears in many important music venues worldwide. Critics on both sides of the Atlantic have praised his performances for their virility, poetry and extraordinary technical command.

Raffi Besalyan (b.1972) is an Armenian concert pianist, who received Bachelor’s, Master’s, and Doctor of Musical Arts degrees from Yerevan (the capital of Armenia) at its State Musical Conservatory. Moving to the USA, he became a faculty member of Rowan University in New Jersey and studied at the Manhattan School of Music with Byron Janis. He also studied at the Moscow State Conservatory. Presently, Dr. Besalyan is Assistant Professor of piano at Georgia State University in Atlanta USA. At present he is also addition playing in international venues world wide, including Carnegie Hall. The New York Concert Review referred to his technical brilliance and his temperament, speed and power, all of which I recognised from this disc, his second recording and the first to use high fidelity sound (in this case Sono Luminus' "Pure Audio Blu-ray").

Besalyan's selection of a mixed programme of individual Rachmaninov pieces from the Preludes and Etudes-Tableaux rather than full opus content is typical of the recital genre; displaying the composer's wide range of lyrical and harmonic talents and adding one of the longer variation sets (in this case Variations on a Theme of Corelli Op. 42 (1931) to display the pianist's technical skills. As Rachmaninov is one of my favourite composers, and hearing that Besalyan had an affinity with the Russian's music, I played the whole disc at 5.1 DTS-HD MA 24bits/192kHz and was certainly aware of a excellent technical control with clean articulation, a passionate approach (many of the chosen pieces have appassionato or similar instructions) and a sensible approach to tempi. But something was missing, and in the many very loud passages I became fatigued.

I carried out a second hearing, this time following each track with scores and making comparisons with Rachmaninov's own recorded performances, together with those of Brautigam, Shelley, Ashkenazy, Richter, Ovchinnikov, and Nebosin (Naxos) - all RBCD discs; and Arghamanyan (Rachmaninov - Arghamanyan) on SA-CD.

The first track on Besalyan's BluRay is the world famous Prelude in C sharp minor Op.3 No.2, so well-known (to the composer's chagrin) that the audience at his recitals used to stand and chant "C sharp Minor" at him over and over again. Its motif of three downward tolling bell notes was used elsewhere in his piano music by Rachmaninov, a talisman acquired in his youth where he was unforgettably attracted to Russian church bell sounds. That loud statement is followed, after a pause, by a whole page of very soft (ppp) "meditation in stasis", an expressive device characteristic of Rachmaninov's inward-looking mood. Next follows an agitated section, starting at mf, with subtle crescendos to ff and back to mf, finally arriving at fff and passing into the beginning material, this time with heavy accents as well as attaining the climax at quadruple forte. In the last 8 bars, alternating slow chords chime at mezzo forte, then rise to ppp in the last bar.

Besalyan's sturdy rendering of Rachmaninov's Prelude Op.3 no.2 on Track 1 is powerful - too powerful, as his whole first section, which should be ppp, is played starting from MF with the bell motif in the bass at F, quickly rising to overall beyond F as the middle section, Agitato, starts. It moves to fff and finally reaches sforzando ffff at the climax, which, since Besalyan starts louder than required, sounds overly forceful. The last 7 bars have a slow sequence of mf chords over a deep octave in C# with the final C# major chord suddenly at ppp, as if the music has evaporated. Besalyan treats this as a banal crescendo.

Rachmaninov's own version, recorded in 1921, has the full dynamic range from ppp to ffff, carefully following the many dynamic markings in his score and thus displaying a much wider range of emotions. All the above mentioned pianists do the same (note that the comparisons were played at the same volume in my system as I had played Besalyan's Op.3 no.2).

Making further comparisons of the rest of the BluRay programme of Preludes and Etudes-Tableaux with the selected previous recordings, it was clear to me that a wayward Besalyan was disregarding Rachmaninov's specific dynamic instructions, starting supposedly hushed, quiet passages in a generalised range of p to mf, whereas loud passages from f to ffff are favoured correctly. The Corelli Variations, however, suffered particularly from this lack of softness, although dazzling with technical virtuosity but with a heaviness which never approached the charm and magic of Ashkenazy's or Shelley's classic versions. However, four final pieces by Besalyan's countryman Arno Babajanian fill the disc running time to just over 1:5 and these are played beautifully, convincing with their lyricism and colourful Romantic harmonies which are not too far from Rachmaninov's idiom.

This BluRay was recorded at Sono Luminus Studios, a nearly 100-year-old quite small former Emmanuel Episcopal Chapel in rural Boyce, VA in Virginia, where a Steinway Model D was placed.

The primary recording statistics are 24bit, 358.2kHz in 7.1 Surround sound, from which the DTS HD encodings were made. The piano seems very close to the microphone array, with a large and wide sonic image between my front speakers. The piano, especially in its lower regions, sounds very sonically lively, although very loud sections of the music make one want to move away from the listener's central position, rather overwhelmed. This probably relates to the almost complete lack of a reverberant sound-field to develop the piano sound with sonic bloom. This dryish, close-miked recording could well have affected Besalyan's compressed dynamic range.

My personal requirement for a good piano recording is to have it at a concert distance with a smaller image and a clear place in which it stands in a hall with a recognisable ambience. The 5.1 track here has some signal in the surrounds but not one which really offers ambience of significance, and I can't reliably tell the 2.0 Stereo24/192kHz track from the 5.1 track. Not a particularly "natural" recording for me, but other listeners who enjoy close miking will be overjoyed.

Besalyan's pianism has many excellent features and may well beguile listeners who do not have a deep knowledge of Rachmaninov's solo piano music, but may want a single disc of "favourites" for their BluRay collection. Connoisseurs might look elsewhere; there are plenty of well-loved performances of this music which are more than competitive. But there is no doubt that Bersalyan will develop his musical talents with ongoing maturity and is worth watching for...