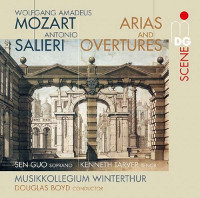 
Vienna Rivalry
Mozart and Salieri – a very special relationship. Since Milos Forman’s Amadeus at the very latest, legends and conspiracy theories have been known to one and all. Salieri’s artistic quality has been overshadowed, but he did indeed contribute significantly to the glory of the Viennese opera. Salieri brought together many different currents and helped Gluck’s Parisian opera reform to its breakthrough in the Habsburg capital. On its latest release the Musikkollegium Winterthur dedicates itself to the two alpha composers at the court of Joseph II – a captivating opera program guaranteed to delight fans of the music theater – and not only them!

Milan Opening
Salieri opens Axur, Re d’Ormus with cymbals and drums. This Janissary music made the opera famous far beyond Vienna’s borders. Some of its arias have been preserved to the present day in mechanical musical instruments and musical clocks throughout Europe. The program includes three genuine smash hits: the overture, the soprano scene ”Come fuggir,” and the duet “Qui dove ride.” The Milan Scala had opened ten years prior to Axur – of course with an
opera by Salieri. “Ah! Lo sento!” from L’Europa riconosciuta shows why Salieri ranked as Europe’s leading opera composer for many years.

Munich Premiere
Mozart thus had to exert himself, and he did so with success. For the Viennese production of his Idomeneo, which he composed for the Munich residence just prior to moving to the Austrian capital, he reworked some parts of it and added new music. A stroke of luck: in the enchanting duet “Spiegarti non poss’io” Sen Guo and Kenneth Tarver melt in wonderful emotionality, and in the rondo “Non temer, amato bene” Winterthur’s concertmaster Robert González Monjas shines in a supple rendering of the tenor part. The magnificent ballet music formed the crowning conclusion already in Munich – a tribute to what was certainly the best orchestra of those times.

Winterthur Wizardry
The quiet tones too find a good home in Winterthur: Douglas Boyd teases colors of the greatest tenderness out of his orchestra in the “Six Ländler Dances” from the last years of Mozart’s life, and on this lovingly produced double SACD they shine in all their great splendor. Optimally of course in 3-D technology – a festive gala for home listening!