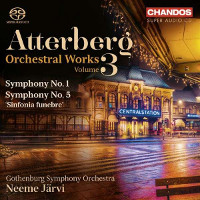 
Neeme Järvi and the Gothenburg Symphony Orchestra continue their Atterberg survey with this third volume of symphonies. Atterberg’s music will be in the spotlight this summer with the celebration of the Nordic composers Nielsen and Sibelius.

Atterberg sent the first three completed movements of his Symphony No. 1 to Stockholm’s Royal Academy, seeking a scholarship in order to travel to several cities in Germany to attend musical performances. When he came back he added a finale with an introductory Adagio in which he, as it were, ‘reminded’ himself of what he had already composed. The first performance of the symphony, in 1912 – also Atterberg’s first concert as a conductor – was warmly welcomed although the work was thought very modern; six months later it became the first of Atterberg’s works to be played abroad.

Atterberg also conducted the premiere of his Symphony No. 5, which gets its title ‘funebre’ from the slow, tragic second movement, particularly an elegiac motive in the first theme. The movement is a sort of lament over his unaccomplished early dreams and hopes. Atterberg made several revisions to this work, even rewriting the last movement twenty-five years later, and it is the revised version that has been recorded here.

Atterberg's particular brand of Scandinavian late-romanticism is immensely appealing, and the two works on this beautifully recorded SACD contain music that is richly melodic and full of heroic grandeur. The composer's masterly and colourful orchestration also adds much to the instant attractiveness of both these Symphonies which are performed here in their revised versions of 1913 (No.1) and 1947 (No.2).

Those who have acquired the two earlier issues will know exactly what to expect in terms of an interpretive stance from Järvi. As so often, he favours fast speeds that impart a sense of urgency and drive to the outer movements of both symphonies – an approach that in the context of these two dramatic compositions works particularly well. But the lovely second movement of the 1st Symphony is taken at a flowing andante rather than the marked 'Adagio', while the central 'Lento' of the 5th Symphony, that gives the work its title 'Sinfonia funebre', is powerfully lamenting as opposed to anything that suggests funereal solemnity. To be fair, listeners encountering these works for the first time are unlikely to feel that excessive haste is a problem. When, however, one compares Järvi's slow movements with those on the fine CD versions by Ari Rasilainen and Frankfurt Radio Symphony Orchestra, the latter's more measured tempi and expansive phrasing may be considered by some to bring an extra eloquence to the music that Järvi misses. Conversely the visceral excitement that Jarvi engenders in both works, aided by electrifying playing from the Gothenburg Symphony Orchestra, who have never sounded better, is not to be underestimated.

The 5.0 multi-channel recordings (24-bit/96kHz) made in the Gothenburg Concert Hall by the experienced team of Lennart Dehn and Torbjörn Samuelsson in February 2014 (Symphony No. 5) and January 2015 (Symphony No.1) are open and spacious, with a wide stereo spread. Those primarily seeking the best possible sound quality will almost certainly go for this Chandos SACD, though the Rasilainen / CPO recordings made in the 1990s still sound pretty good.

I have enjoyed this series of recordings of Atterberg Symphonies from Neeme Jarvi and Chandos. This is Volume 3 and what remains for this to be a complete traversal are recordings of Symphonies 3, 7 and 9, the last of which is a choral symphony ala Beethoven. There is really only one modern set to compare Jarvi’s recordings to and that is the set from Ari Rasilainen on the CPO label (RBCD only). As with earlier entries, Jarvi’s approach to this music is more urgent in character than Rasilainen. As I said before, the music is robust enough to withstand the differences in tempo and I rather like these readings.

The Symphony No.1 (Op.3, written in 1909-11 and revised in 1913) is a terrific first outing for a young composer. The B minor key portends plenty of drama and the music indeed delivers it. There is little in the music to suggest its late composition date – it is solidly diatonic in nature and could have been written 40 years earlier than it was. Neither does it sound particularly Swedish. Rather, it has a Germanic demeanor reminiscent of Friedrich Gernsheim (yet another lesser-known symphonist). In any case, it is a tuneful, well-orchestrated affair in four movements (36:46 in this reading) that doesn’t outstay its welcome. There is some very beautiful, pastoral music in the Adagio second movement and some sprightly music in the third movement scherzo which follow it without pause. The finale opens with a lilting melody for solo violin that gets developed into a roiling, minor key anthem. Good stuff. Compared to Rasilainen’s CPO recording, Jarvi trims roughly a minute from each movement which in my book helps the music.

The Symphony No.5 is more compact, comprised of three continuous movements taking 26:25 here. The comparison with Rasilainen is much more severe in this symphony where he takes 34:23 to cover the same turf. Atterberg subtitled this “Sinfonia Funebre” but in Jarvi’s hands there is nothing funereal about it. Still, Jarvi’s performance is quite good and I like his urgency. The Gothenburg Symphony is, as usual, in very fine form and respond precisely and with passion to Jarvi’s baton. I would put this performance alongside Rasilainen as a valid view of the piece but clearly Rasilainen’s approach more closely matches the composer’s tempo expectations where he brings more weight and angst to the music. I’m glad I have both in my collection.

The recorded sound is very good. Despite there being about a year separating the recordings of the two works on this SACD, there is a consistently excellent sonic picture portrayed from the usual Gothenburg Concert Hall. The back cover indicates a 24 bit/96 kHz native pcm recording. Booklet notes by Stig Jacobsson are excellent. I'm looking forward to the completion of this series. Recommended.

In typically inexplicable fashion Chandos has ( or have, if you prefer) announced the release of volume 4 in the series in RBCD only. $&@#%!

According to the recording details on the Chandos site, Vol 4 includes a live recording of Sym 3 made way back in 1997 - I suppose that is why it is not being released in SACD. Major disappointment. The the two accompanying minor works are recent recordings but, despite that, the recording resolution is listed as 16 bit/44 kHz (regular RBCD standard)

Thanks for the clarification, Mark. I've always found Chandos' release policy very confusing. A large number of their most appealing recordings from a repertoire perspective have been rbcd only (or hi res downloads but I'm not going there), so it's nice to know there's a reason for this one.

Well, their 1999 recording of Vaughan Williams 5th (Hickox) was only 20-bit, but they put that on SACD. For that matter, there are plenty of older recordings (some much, much older) that have been remastered for SACD. I find having the one CD in this set very incongruent. 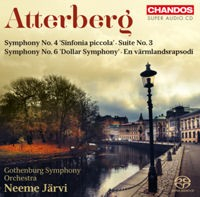 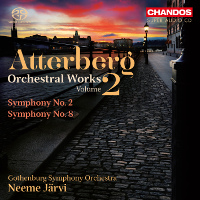 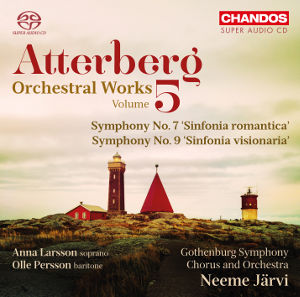