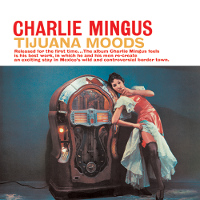 
Tijuana Moods, originally recorded in 1957 but not released until 1962, is a boisterous, swinging suite of songs that meld bebop with the tequila haze of nightclubs, a flamenco striptease, serenading mariachis and the glare of the Mexican sun in the hedonist milieu of the border town.

Tijuana Moods was the first Charles Mingus recording to include drummer Dannie Richmond, who subsequently worked in close partnership with Mingus for more than two decades. The stereo master tape was constructed from multiple (complete and incomplete) takes and breakdowns.

"Tijuana Moods" was recorded for the short-lived RCA subsidiary label Vik in July and August 1957 but not released until 1962. This was an explosively creative period in the artistic life of Charles Mingus. After more than a decade on the margins of the record business due, in part, to his refusal to relinquish rights of ownership of his compositions to management and record companies, Mingus was finally poised to reach a larger audience.

Newly remastered for SACD by Bernie Grundman, "Tijuana Moods" can be enjoyed for its skillful musicianship and golden-age stereo recording, but taking into account incidents from Mingus' life adds to an appreciation of the work.

In the summer of 1957, the troubled marriage of Charles and Celia Mingus was close to an end. During a period of separation, Mingus took drummer Dannie Richmond on a trip to Tijuana, Mexico in search of food, drink, women, musical inspiration; escape from his personal demons. The border town was familiar to Mingus, who was raised in Los Angeles, California.

Charles Mingus Jr. was the youngest child of African-Americans of mixed race. His paternal grandmother was of Swedish-German ancestry and his paternal grandfather was the black grandson of a German-born plantation and slave owner. His father, Charles Mingus Sr., was so light-skinned that at times he 'passed' for white, but ultimately settled in the black community. Mingus' mother, who died when he was only a few months old, was of mixed ancestry, partly Chinese and Afro-British. Growing up in the African-American Watts neighborhood of Los Angeles, young Charles Jr. was subjected to painful taunts for his light skin and ambiguous features. Mingus would be preoccupied throughout his life by the conundrum of racial identity.

Brian Priestly's "Mingus: A Critical Biography" recounts how Mingus' stepmother Mamie frequently brought him to services at the Holiness Church, a Pentecostal denomination where spontaneous outbursts of glossolalia (speaking in tongues) were accompanied by joyous clapping and loud, rhythmic music. Echoes of those church services can be heard in the cacophonous passages of 'Dizzy Moods' and 'Ysabel's Table Dance' on Tijuana Moods, and feature in much of Mingus' writing in this period.

Mingus' writing is very well represented in recordings made in 1957. January and March sessions with the working band at Atlantic can be heard on The Clown. In June, Mingus performed a movement of his suite 'Revelations' for Columbia Records. July was especially active: a trio date with his friend Hampton Hawes, a session for his own Debut label under the leadership of trombonist Jimmy Knepper, and the first of two sessions for Tijuana Moods. From August to October he completed Tijuana Moods, taped another session for Debut and recorded two albums for Nat Hentoff's Bethlehem label, East Coasting and A Modern Jazz Symposium of Music and Poetry.

Provided with the advanced production facilities of RCA's Studio A and the patient indulgence of producer Bob Rolontz, Mingus recorded all but one of the five pieces on Tijuana Moods in multiple, incomplete takes, called breakdowns. The 2001 Bluebird First Editions reissue of Tijuana Moods contains detailed information about the performance/editing process, including take numbers. The opening tune, 'Dizzy Moods' comprises five tape edits in the span of 5:49. While some of the edits fall a fraction of a beat off meter, by and large the effect is in keeping with the stop-and-start technique that was characteristic of Mingus' compositional method.

Charles Mingus worked towards a very specific ensemble sound with the 1957 sextet. Shafi Hadi and Jimmy Knepper function as a kind of miniature Ellington-style reed and trombone section, while Clarence Shaw's hesitant, behind-the-beat phrasing and melancholy lines emphasize the emotional depth of the composer's frame of mind. In Bill Triglia, Mingus was fortunate to collaborate with a Julliard-trained, highly-proficient pianist who was more than equal to holding down the difficult arrangements.

Mingus himself is heard to outstanding advantage on the new SACD. In part due to his interest in achieving a collective group sound, Mingus did not often take lengthy solos in the studio. His virtuosity was long recognized by his musical peers, and it is gratifying to hear with clarity and definition the tone quality he could achieve on his hundred year-old German bass viol. The guitar-like strumming on "Ysabel's Table Dance" remains distinct in the mix, behind but not obscured by the vocals, handclaps, castanets and horns.

A comparison of the first five tracks on CD 1 of the 2001 Bluebird edition to the new SACD suggests that the source is the same, and that the stereo tape was very well-preserved. Bernie Grundman's mastering, as in Sonny Rollins: The Bridge, reveals plenty of aural space around the drum kit, a smooth midrange typical of recordings of the era, and very little in the way of distortion or dropouts. The 2001 CD offered very good sound quality and is valuable for the alternate versions, unreleased tracks, breakdowns and recording data. I have not heard the LP reissue of Tijuana Moods on the respected Speakers Corner label and can only compare the new SACD to the 2001 CD and the 1986 set New Tijuana Moods, which was digitally sourced and issued on LP and CD. The Grundman SACD exceeds both previous digital reissues in sound quality, and is highly recommended.

Recognition came late to Charles Mingus. Musically gifted, perspicacious, hypersensitive to betrayal and often infuriated by the racism of American society, he struggled to establish a career of his own design, an endeavor that was impeded by the straitened economics of the music business and his own demons of rage and self-doubt.

Not until the final years of his life, confined to a wheelchair with the incurable degenerative disease ALS, did he receive widespread critical acclaim as one of America's greatest jazz composers.

Thanks to Ben Leggett for bringing up this disc. As of the date of this post, the Original Recordings Group SACD is still in stock at a US audiophile disc vendor.

There are some Mingus recordings available in hi-res that are well-mastered:

East Coasting: Bethlehem 24/96. This is the mono tape, which has much better piano sound than the stereo CD on Candid. An under-appreciated album.

Modern Jazz Symposium: Bethlehem 24/96, with the caveat that the sound quality is not as good as East Coasting.

Charles Mingus at Bremen 1964 & 1975 on Sunnyside 24/96 (in some regions). Recommended for the 1975 set; the 1964 recording is on par with other recordings from that tour. I saw Mingus in San Francisco in '75, so the recording has personal significance for me. The sound on his bass is very 1970s; perhaps a contact mic straight into the mixing board.