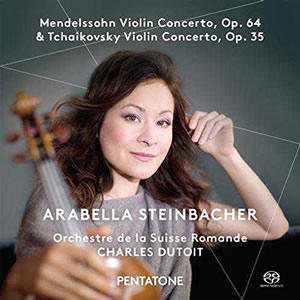 
This release arguably features the two greatest concertos ever written for the violin: performed by one of the most brilliant violinists of her generation, together with one of the finest orchestras, and under the baton of one of the world’s foremost conductors. This recording of Tchaikovsky/Mendelssohn violin concertos bears witness to the eminence of the collaboration between violinist Arabella Steinbacher, conductor Charles Dutoit and PENTATONE’s Orchestra of the Season January June 2015, Orchestre de la Suisse Romande, and the result thereof.

After waiting for a long time to record these concertos with the perfect collaboration, Arabella Steinbacher didn’t waste any chance to shine with heart-felt enthusiasm and bravura in this recording. Her performance produced such a pure, yet fierce sound that it allowed the music to speak in an immediate, translucent way. Recorded in September 2014 in the magnificent Victoria Hall, Geneva, the Orchestre de la Suisse Romande were totally at home with the repertoires and performed with great confidence; they were led by Dutoit, who was vivid, rhythmic and clear in his direction. The vigorous playing results in a vibrant sound that is captured perfectly in this multi channel SACD recording.

The booklet contains the following note from Arabella Steinbacher:
'These concertos by Mendelssohn and Tchaikovsky are part of the absolute "standard repertoire" usually studied by violinists at a young age. And to be honest, although I love playing these works regularly in my concerts, I had never before felt the need to record them, unlike other, rarely played repertoire that I have recorded in the past.

However, Charles and I have performed the concertos together many times and no matter how often I play them, I realize every time again that it feels new for each successive performance - this is the magic of music.

These are simply such wonderful concertos that I was extremely happy to make this recording with him and the extraordinary Orchestre de la Suisse Romande.'

In the Mendelssohn, which opens the disc, the tempo of the first movement dwells so much on the appassionato that it frequently loses momentum; it is more almost two minutes slower than Mullova & Gardiner (Beethoven / Mendelssohn: Violin Concertos - Mullova / Gardiner). While Mullova's account may be exceptionally "alive" musically speaking, even Karajan for Mutter managed to be consistently more forward looking in his phrasing. The central Andante is again given a leisurely treatment and the music is more forgiving of such an approach. Both here and in the finale, Steinbacher shows signs of the winning sparkle that have adorned earlier recordings but the orchestral contribution is audibly not inspired.

The Tchaikovsky faces similar problems to this listener; the orchestral playing sounds lethargic by comparison to that in Tchaikovsky: Violin Concerto - Fischer, Kreizberg. Again, the somewhat pedestrian tempo choices in the outer movements do not help them or Steinbacher. Compared to Julia Fischer's winning account which still jumps out of the speakers, grabbing the attention from lyrical beginning to ecstatic end, this is very much less engaging.

Good engineering goes some way to alleviating the disappointment experienced but it is not enough to recommend wholeheartedly to all but completists for this undoubtedly fine violinist.

The obvious fondness that Steinbacher feels for Dutoit & this orchestra in the concert hall has unfortunately not translated itself into the recording studio.

"This disc wasn't an impressive listening experience. I cannot understand why PENTATONE decided to release another recording of Tchaikovsky's Violin Concerto! We have hundreds of brilliant recordings available but this isn't definitely one of them. The previous version Tchaikovsky: Violin Concerto - Fischer, Kreizberg is better in many ways.
PERFORMANCE
I start my review with Tchaikovsky's Concerto. Compared to Fischer, the tempo choices were much slower. For example, the total time of the first movement was almost 21 minutes! Steinbacher is skillful soloist but the overall impression was dull and too smooth - she hasn't interesting ideas. Fischer's approach is simply much better: BBC Music Magazine gave five stars and nominated it as "The Best Recording of the Orchestral Category".
Mendelssohn's Concerto rides on the same line. The performance was boring and uninteresting. PENTATONE will release another recording - Mintz, Chicago Symphony Orchestra, Abbado - in their REMASTERED CLASSICS Series.
RECORDING
Surprisingly the recording of PENTATONE was - at this time - quite unclear. I haven't heard this on surround. But on stereo there was too much bass. The voice of the violin was quite distant and quiet.
Not recommended at all. Buy the older release - Fischer, Russian National Orchestra, Kreizberg - if you want a SACD release of PENTATONE.
Other recommendation: Vadim Gluzman (violin), Bergen Philharmonic Orchestra, Andrew Litton (BIS)
· Performance: **
· Sonics: **** (Stereo)

Conductors seem to determine the outcome of many performances. About 10 years ago I heard what at the time was the finest performance of the Beethoven violin concerto ever. Julia Fischer and the Baltimore Symphony under the direction of Yuri Temirkanov. I was so impressed with this I traveled down to PHiladelphia to hear her perform it with Eschenbach and the Philadelphia Orchestra. It wasn't even close.

At SPAC I heard Arabella Steinbacher so engage the audience in a performance of the Tchaikovsky with the Philadelphia Orchestra under Nezet Seguin that they gave a standing ovation after the first movement. It was intense! Nothing like this sad recording. I have heard Charles Dutoit do wonderful things but this recording in my opinion, is a performance ruined - just like the ruination of Fischer's Beethoven in PHiladelphia by Eschenbach.

As an aside, I heard Steinbacher, several years later - this time with von Dohnanyi, give an even better performance of the Beethoven with the Boston Symphony at tanglewood. How I wish that had been in Symphony Hall..... and recorded!

Is it more than a co-incidence that Steinbacher's recent coupling of the Britten and Hindemith Concerto's also massively disappoints? Same orchestra, different conductor.

Of course every performer has good days and bad days but interpretation and expression surely are down to the soloist not the conductor. I never heard nor attended a bad performance from Julia Fischer although she seemed to excel with the late maestro Kreizberg.

Actually the new Britten/Hindemith does NOT disappoint me at all. Heeding the HiredFox's comment I relistened to the Roth disc a couple nights ago and continue to admire the extraordinary loveliness of Steinbacher's performances. Roth ?....its ok.

I might be able to change your mind over a beer or a glass or two of St Emillion, Bruce but alas geography means that it is unlikely we will ever be able to do that.

In the meantime if you can, listen to James Ehnes account on Onyx RB which frankly knocks the socks off all three recent SACD contenders.