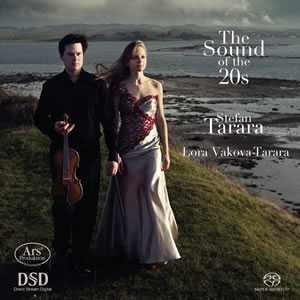 
The sound of the 20s: The three fine, substantial 20th c. works, and the brief 21st c. piece reflective of the program's mission, all composed for violin and piano duo, offers an instrument-specific look into the musical world of the 1920s. With the exception of Jacques-Alphonse De Zeegant (b. 1955), all the composers represented here - Bloch, Ravel and Enescu - were born during the final third of the 19th c. The idea behind the selections on this new Ars Produktion recording presented by Stefan Tarara and Lora Vakova-Tarara is to make audible a cross-section of the many tone colors, contrasts and emotions of the era.

"The Sound of the 20s" is the title for an intriguing programme of four chamber works, three sonatas for violin and piano written in the 1920's by Ernest Bloch (1880-1959), Maurice Ravel (1875-1937) and George Enescu (1881-1955). The 1920s was the decade that marked the beginning of the modern music era. It was marked marked by the development of folk music as a classical style (particularly in Eastern Europe), various experiments in harmonic schemes, the dimunition of Classical and Romantic styles and the arrival in Europe of Jazz and Blues. The selected violin sonatas neatly exemplify these characteristics.

Violinist Stefan Tarara (b.1986 in Heidelberg, of Romanian origin) made his first stage appearance with the violin at the age of 4, and now has won no less than 27 First Prizes at national and international level. Critics have admired his “brilliant technique coupled with a lean, uncluttered and finely crafted sound that is velvety in the lower registers and exquisitely luminous in the upper", and "the most remarkable aspect of Mr. Tarara’s playing is his artistic maturity, combining an unerring sense of style with deep musicality. Nothing appears forced or rehearsed – it comes from within.” Having played this disc several times, I whole-heartedly endorse these comments.

His partner Lora-Evelin Vakova-Tarara (b. 1990 in Plovdiv, Bulgaria) was 10 when she gave her first piano recital. She too has a substantial collection of First Prizes, including those for accompanying. Her technique is brilliant and in her part of the duo she sensitively matches a sense of style and commitment to the music of her violinist, all with an unerring rapport.

Bloch began his violin lessons at 10 and committed himself to composing music at the same time. He is best known for his lush writing and pulsating passion, often designated as neo-romantic (a rather confusing appellation). But in his own words, his biggest influence is the religious, cultural and musical heritage of the Jewish people. "The complex, glowing, agitated soul that I feel vibrating throughout the Bible" as he defines it. He described his Sonata for Violin and Piano in A minor (1920) as "a tormented work, although basically wild and savage in character, it has some moments of luminous tranquillity to relieve the overall ferocity". The source of this ferocity? His anguish drawn from the First World War, recently over. That tranquillity appears longest in the second movement, inspired by his reading a book on Tibet. The third movement is a barbaric march, with the piano in stormy percussive mode.

Ravel remarked of his Sonata No. 2 for Violin and Piano in G major (1927) "a sonata for two essentially incompatible instruments". This wry expression appears in various guises in this highly original and inventive work. Its first movement has a bare, transparent quality which leans towards lyricism but is interrupted by unsettling outbursts of sharp, short staccato chords; the duo has a sense of inner humour with the rapid changes in metre and rhythm which is delightful. The second movement is given a clue title - "Blues", which Ravel had brought back from a trip to the USA. Stefan Tafara is challenged here as the violin is used as a wailing saxophone, done by sliding the same finger from note to note, while the piano strums guitar effects. The third movement is a very difficult high-speed moto perpetuo for the violin, which Stefan brilliantly masters, while the pianist plays a simple part.

At this point in the programme, the duo introduce us to a short 'intermission' piece which they obviously have great affection for. The Belgian Jacques-Alphonse de Zeegant (b. 1955) composed 'Souvenirs d'Espagne' for Piano and Violin to portray the light and airy landscapes of the Spanish plains and the nostalgic contours of the French countryside. Dating from 2007, this is an example of using a modernist approach from our age but related to the 20s, and it is tenderly and lyrically played, including some very soft passages with beautiful tone.

Enescu's Third Violin Sonata (1926) is highly complex, with emotions changing rapidly, even from bar to bar, with an unusually large number of instructions to the players. These have to be worked out jointly and the level of their effect determined. Tafara and his partner do a fine job of keeping the music flowing and meaningful in each of its three movements. The sonata, according to Enescu, was based on Rumanian folk music, but not using actual folk tunes. The violin takes the part of of a folk fiddle and the piano has to mimic the cimbalon and the kobza (an instrument of the lute family), with the violin using all its bravado to conjure up the antics of a gypsy instrument. The first movement, marked 'melancholy' is suave and nostalgic in its first group of themes, with an old man's dance for the second group. A three-part second movement is introspective, with the violin mostly playing harmonics. Rondo-like structure in the Finale mimics a bear dance from northern Moldavia. It has to be said thatthe duo's innate feeling for the Rumanian country styles, rhythms and decorations are all carried off most convincingly.

Ars Production's brochure (in German and English) is very well supplied with material about the programme, with each piece commented upon, astutely and insightfully, by Stephan Tarara himslef in conversation with the writer of the booklet. Sonically, the superb performances are supported and enhanced by the very natural recording in an unobtrusive but essential ambience, especially in 5.1 multichannel. The Steinway D is in very fine condition, with a characteristic full, rich bass, mellow mid-range and a sweet, not hardened upper-range, which applies to the highest violin treble too. Stage focus, very wide dynamics and tonal detail adds enormously to the musical collection.

This is my first encounter with the partnership of Stephan Tarara and Lora Vakova-Tarara (posed romantically on the cover and elsewhere in the booklet) and I am very impressed. These pieces are very difficult technically and poetically to bring off, and the pair do this in an exemplary manner, which makes for very pleasurable listening. As a chamber music disc for any collection, I recommend it most sincerely.

I listened to the Bloch last night and found it wonderful. It was deeply involving. The Ravel is also excellently performed. I look forward to hearing the Enescu and de Zeegant very soon.