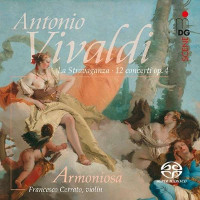 
Fresh Breezes
Fresh breezes from Italy! The ARMONIOSA baroque ensemble celebrates its dazzling MDG debut with the twelve violin concertos from Antonio Vivaldi’s La Stravaganza op. 4. The thirteen musicians savor the great Venetian master’s highly imaginative extravagancies with exuberant performance joy – so that it is hard to believe that this precision team first came together in 2012! Francesco Cerrato, a genuine violin ace, presents the solo part – no easy task, but the young Piedmontese virtuoso rises to the challenge with bravura and grandeur.

Baroque Flourishes
Antonio Vivaldi brought the baroque solo concerto to incomparable flourishing, and La Stravaganza is certainly his masterpiece. The seemingly simple form is varied in manifold ways: extended orchestral passages treat the individual instrumental groups like soloists, and lyrical solos distinguish slow movements sometimes including prescribed embellishments. The Concerto in D major begins with a solo by two violins, the tutti part initially enters in unison, and the fortissimo marshaled by ARMONIOSA at the end of the first movement is an absolute listening must.

Hot Pursuit
The Concerto is D minor is particularly interesting: a wild chase in 12/8 time answers a mournful introduction in the solo violin and seems to come to its close in an adagio chord. But then the relentless hunt continues with even greater excitement before the furious presto goes over into an adagio passage in which all life seems to have met its demise. It was not only in the Four Seasons that Vivaldi was a great storyteller!

Perfect Harmony
And ARMONIOSA tells these stories as they should be told. Historically informed and playing on authentic instruments but free of any sort of dogmatism, the young musicians offer refreshingly direct access to the baroque tonal idiom. This debut album – of course as an SACD in original three-dimensional 2+2+2 room sound - makes us eager for more.