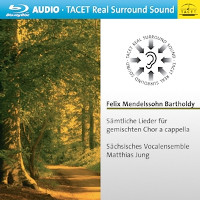 
Presumably spring was Felix Mendelssohn’s favourite season. In eight of the total of thirty a cappella choral songs, spring is mentioned in the title; and it is possible that the forest was the place he most liked to be, because not only are very many of his songs about forest: he also visualised his music being performed in woodland. In a letter to his mother he described such an experience; and in his own illustration (reproduced in the detailed CD booklet) he even painted the scene. This first complete collection is rounded off by two first recordings. Following their recordings of Bach (TACET 108), Schütz (TACET 99) and Pepping (TACET 123), Matthias Jung and the Saxon Vocal Ensemble once again demonstrate how well they can perform German lyrics.