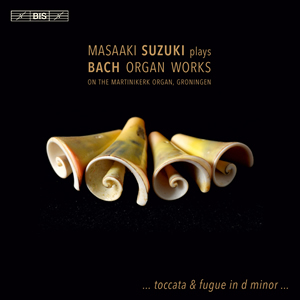 Masaaki Suzuki playing the Schnitger/Hinz organ in the Martinikerk, Groningen


The recipient of the 2012 City of Leipzig Bach Medal, Masaaki Suzuki has earned an enviable reputation as an interpreter of the music of Johann Sebastian Bach – as a reviewer in International Record Guide has put it: 'With Suzuki you can hear Bach's heart beat'. To a wide audience he is known as the director of Bach Collegium Japan, and the moving force behind the ensemble's acclaimed recordings of Bach's complete sacred cantatas. Perhaps less well known is that he began his career – at the age of 12! – playing the organ at church services in Kobe, where he was born. Suzuki has remained true to the organ throughout his life, and for BIS he has previously recorded Bach's German Organ Mass, as well as programmes of Buxtehude and Sweelinck.

He here appears on a disc which combines some of Bach's best-loved works for the instrument, including the D minor Toccata and Fugue, the Partitas on ‘O Gott, du frommer Gott’, BWV 767, the Canonic Variations, BWV 769, and the celebrated Prelude and Fugue in E minor, BWV 548. The recording was made in Groningen's Martinikerk, with Suzuki performing on the renowned organ, one of the most important and impressive in the Netherlands.

Masaaki Suzuki founded a period instrument orchestra in 1990, significantly called 'Bach Collegium', and in the subsequent process of recording Bach's choral and orchestral works with BIS became an eminent Bach scholar. Although generally regarded as a conductor and choirmaster, he is also an expert in Baroque keyboard music for the organ and harpsichord. He began playing organ professionally at church services at the age of 12. Later he earned degrees in composition and organ at the Tokyo National University of Fine Arts and Music. At the Sweelinck Conservatory in Amsterdam he then studied harpsichord and organ with Ton Koopman and Piet Kee and improvisation with Klaas Bolt.

JS Bach was regarded by his contemporaries as an unrivalled virtuoso, feared expert on organ building and a consummate composer of organ works, for both the Lutheran liturgical and secular occasions. For this recital, Masaaki has carefully chosen representatives of Bach's styles of keyboard music, from sacred music in which a hymn or chorale is artfully varied in a suite of movements, to purely instrumental works such as the Italian Toccata, French Fantasia and Netherlander Prelude and Fugue. For his organ, he chose the famous Arp Schnitger instrument of St. Martin's church in Groningen, Netherlands, used for recordings by Marie-Claire Alain, Ton Koopman, and Gustav Leonhardt. Quite likely, Masaaki himself played on this organ during his studies in Amsterdam. Like virtually all historic Baroque organs, it has had a very complex history, but its present reconstruction has excellent playability and remarkable brilliance. Additionally, it uniquely has the original principal 32' pipes manufactured by its great builder, Schnitger.

The programme has three key points; first the outstanding and popular Toccata and Fugue in D minor, BWV 565 (so popular that it is named enticingly on the front cover), centrally the Partite Diverse Sopra Il Corale 'O Gott, du Frommer Gott BWV767 (Nine variations of the Hymn which follow the content of each verse) and in conclusion the majestic Prelude and Fugue in E minor BWV548 (the longest fugue in all Bach, often called "The Wedge" on account of its opening theme which starts with one note, then with two notes either side forming a minor third, and then gradually widens to an octave.)

Suzuki displays his studies of Bach's performance practices for us, giving the appropriate appropriate expression of the composer's manuscripts, which were usually written nearly devoid of instructions for tempo, phrasing and dynamics. The D minor Toccata and Fugue is therefore resplendent with relished crushing harmonies and a sense of strong rhetorical improvisation in its showing-off (there is still controversy about whether this popular piece is by Bach or not, as clear evidence either way is not available). The charming Pastorale is pure delight, long-held deep rustic drone pedal notes underlining dance rhythms and rippling melodies, making use of the organ's fine solo stops, particularly amongst the flute ranks. Both the Partitas of BWV767 and the Canonic Variations BWV769 are based on chorales, the hymn verses of each being presented in the booklet, albeit in German only. This is a pity, since Suzuki notably expresses each of the movements in these pieces to follow the contents of the hymn's verses.

I was impressed by the clarity of the recording's capture of Suzuki's scholarly articulation, and the generally excellent balance of not-too-close pipe ranks within the beautifully reverberant church. But when the full organ played the dense chords of the Fantasia in G, the unrelenting addition of the fierce mixtures (high-pitched stops with multi-harmonics) soon caused aural fatigue, tending to overshadow the underlying polyphonic lines, for my ears at least. Comparing Ewald Kooiman's performance of this piece on a Silberman organ (from Aeolus's Complete Bach Organ Works, Bach: Complete Organ Works - Kooiman, Gremmel-Geuchen, Gnann, Klapprott) the difference in internal balance was striking, with the upper layer of mixtures exciting but not over-bright, allowing the main lines to be fuller and deeper. The Silberman pedals, incidentally, had sharper attack and thus conveyed more excitement than those in the recording of Suzuki's Schnitger.

There is much to learn and enjoy about these organ works from Suzuki's approach. The Canonic Variations on ‘Vom Himmel hoch’ BWV769 (considered to be the acme of Bach's many works with canon), for example, is often regarded as being academic, but in Suzuki's inventive hands (and feet) the piece is beguilingly angelic. Recommended.

Over on the old site it was noted by another participant that this disc had been chosen as Gramophone's "record of the month", to which I responded: "and well deserved, too. The playing and recording are simply gorgeous. Suzuki presents a perfect blend of virtuosity and deep spirituality. If there were only one organ recording to take to the proverbial desert island this would be it." Self quotation is pretty obnoxious, but better than writing it over again since more playings haven't changed my opinion a bit.

If you have bought this record from eclassical.com in Studio Quality, it is now available to re-download in 5.0 surround without an extra cost.
There are others records that this apply too. As I understand it, Eclassical and BIS will re-release more downloadable sacd's as 5.0-files. Myself, I will tonight immense myself in surround downloads of Bach, Rachmaninov and, unless it's too late, Prokofiev.

I have no commercial nor personal connection to BIS or Eclassical. I just like what they are doing. 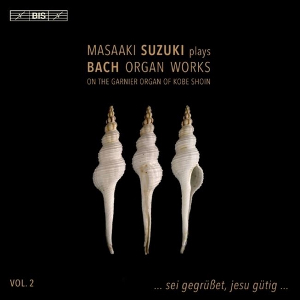 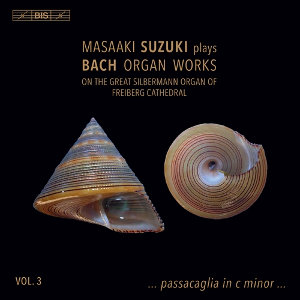