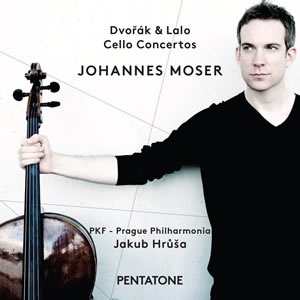 
German-Canadian international soloist Johannes Moser recently signed an exclusive recording contract with PENTATONE. He regularly performs with the world’s leading orchestras such as the Berlin Philharmonic, New York Philharmonic, Chicago Symphony, London Symphony, Royal Concertgebouw, NHK Symphony, Philadelphia and Cleveland Orchestras as well as the leading conductors of our time including Mariss Jansons, Valery Gergiev, Zubin Mehta and Gustavo Dudamel. He has received many accolades for his recordings including two ECHO Klassik awards as well as the Preis der Deutschen Schallplattenkritik.

For his debut album with PENTATONE Johannes chose to record the pinnacle of the repertoire for cello and orchestra, the concerto by Antonín Dvořák. In this monumental work Dvořák explores the entire spectrum of human emotion, very much inspired by his own experiences, ranging from exhilarating bursts of life in New York City to the devastating tragedy of his unfulfilled love. In preparation for the recording, made with the PKF - Prague Philharmonia, Johannes Moser and conductor Jakub Hrůša had Dvořák's own manuscript at hand in order to come closer to the composer's intention rather than relying on unquestioned traditions and acquired habits, while paying tribute to the concerto's nickname, "Dvořák's 10th Symphony”.

Moser completes his debut album with the Cello Concerto by Édouard Lalo. It is a work of great verve which fully embodies Spanish flair combined with romantic spirit.

Besides being staples of the Romantic cello repertoire the two works have a lot in common. Johannes Moser says about the two concerti: “The unifying motif between these two Cello Concertos is a sense of yearning: From America, Dvořák yearned for his homeland and an unfulfilled love, whereas Lalo yearned for the typically Spanish flair and the Mediterranean temperament”.

For his début release on the PENTATONE label the young German-Canadian cellist Johannes Moser has chosen two contrasting concertos that, though very different in style, share both bountiful melodic invention and firm symphonic structure. On this superbly recorded SACD Moser is accompanied by the PKF Prague Philharmonia (formerly called the Prague Philharmonia) an orchestra founded as recently as 1994 by the distinguished Czech conductor Jiří Bělohlávek. Here the conductor is the charismatic Jakub Hrůša who elicits outstanding playing from his orchestra in both concertos.

The long orchestral exposition that opens the Dvorak Concerto immediately confirms one's admiration for the quality of the PKF Prague Philharmonia musicians. There is a winning sweetness to the characterful woodwind sound, strings are supple and the lovely horn solo elegantly phrased.

Moser's first entry is firm and commanding and as the movement progresses one appreciates the absolute rapport evident between him and Hrůša. The eloquence of Moser's playing is never in doubt. In the Concerto's more reflective passages, such as the gentle central 'Adagio ma non troppo', it is subtly nuanced while there is plenty of rhythmic buoyancy to be found elsewhere. His technique displays absolute assurance, while the sounds he elicits from his warm-toned 1694 Andrea Guarneri instrument are always beautiful, thanks to the care with which he phrases the melodic lines.

Lalo composed his Cello Concerto in D minor (1876/77) in collaboration with the Belgian cellist Adolphe Fischer and, like the Dvorak work, it is very well represented on disc though unaccountably it seems not to appear very often in the Concert Hall. Moser gives an ardent and expressive account of the piece that should win many admirers, and again the alert contribution of the PKF Prague Philharmonia matches the exuberance of Moser's playing in the lively Spanish atmosphere evoked in the Concerto's second and third movements.

The 5.0 multi-channel DSD recordings were made in January 2015 at the capacious Forum Karlin, Prague where the Polyhymnia team have achieved a rich, detailed yet spacious sound typical of so many excellent PENTATONE releases.

In every respect this is an auspicious PENTATONE début for Johannes Moser and the promised future releases from this exciting and gifted artist are eagerly awaited.

Johannes Moser already has a huge international reputation having played with most of the world's first rank Orchestras and won many awards for his string of superb CD releases on DG and other labels. It is indeed a coup for Pentatone to sign him up for what I believe is his first SACD recording. Readers should not miss his recent performances of Shostakovich and Britten Concertos on DG.

His earlier recordings are mostly on Hänssler. None on DG.

One of those yellow labels. :-) 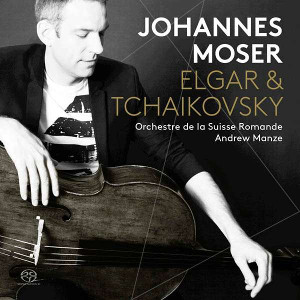