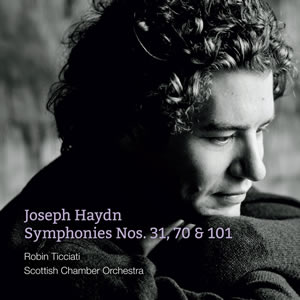 
From Haydn's early period the Baroque influenced ‘Horn Signal' has an almost Gothic tinged feel with highly contrapuntal elements. Comparatively, the first of Haydn's famous ‘London' Symphonies, the ‘Clock', has its focus firmly on the future.

Ticciati's approach takes the best elements of authenticity present in period performances, but with the dynamic range, space, colour and life that modern performance practice brings. Ticciati beautifully highlights the lines, clarity and shape of the music, a skill he brought to bear in his Schumann symphonies recording which garnered several five star reviews and accolades upon release.

Always popular with symphony orchestra's Haydn has occasionally been treated a little too ‘tidily', but these performances are alive and excitingly fresh.

In every respect Robin Ticciati's first recording of Haydn Symphonies is a triumphant success.

On this new SACD for Linn, the Scottish Chamber Orchestra perform three symphonies that span different decades of Haydn's long career. Though each one is the same key – D major, they are wonderfully contrasted in both style and instrumentation.

Symphony No. 31 known as the ' Hornsignal' opens with some of the most thrilling natural horn sounds imaginable from the four superb players led by virtuoso Alec Frank-Gemmill. Ticciati's performance is exhilarating yet never rushed, and in each of the four movements the tempi he has chosen seem ideal to allow the music to breathe with unforced naturalness This is especially true in the Symphony's unusual Finale where, following the statement of a simple theme, Haydn writes seven variations for combinations of various solo instrumentalists and strings. The soloists of the SCO rise fully to the opportunities offered to them with playing of the utmost grace and refinement before the Symphony ends as it began with rousing horn calls.

Trumpets and drums give a festive air to Symphony No.70 as befits a work written to mark the rebuilding of the opera house at Esterháza following a disastrous fire in 1779. The opening 'Vivace' displays Haydn's abundant wit and, with its frequent changes of tempo and dynamics, his ability to surprise listeners whilst at the same time providing challenges to the players. The composer's contrapuntal mastery is demonstrated in the stately 'Andante' that follows whilst high spirits return in the minuet and fugal finale. Again Ticciati and his orchestra's affectionate performance is impeccable, and hopefully will bring new admirers to one of Haydn's less familiar symphonies.

Symphony 101 'The Clock' need no special pleading, being one of the most popular (and most recorded) of the composer's 'London Symphonies'. First performed in1794 it represents the composer at the height of his powers and Ticciati's beautifully paced account effortlessly conveys all of the work's splendour and undeniable charm thanks to the responsiveness of the excellent SCO. I understand that the next recording in this series will include three further 'London Symphonies' – an enticing prospect.

These multi-channel recordings were made in the Usher Hall Edinburgh (January and February 2015) by Philip Hobbs and could hardly be bettered in terms of their clarity, spaciousness and warmth. Linn must also be congratulated on providing detailed booklet notes that not only discuss the three Symphonies on this disc but also include two informative essays 'Haydn and the Enlightenment' and 'Haydn and the Horn' that considerably enhance one's appreciation of this wonderful composer's oeuvre.

I wholeheartedly agree that this is a terrific disc in every respect. My only regret is that with so few Haydn symphonies on sacd two of the three on this disc were already available on other labels. I'd be delighted of Maestro Ticciati and the SCO gave us more Haydn, but please no more from the "London" series.