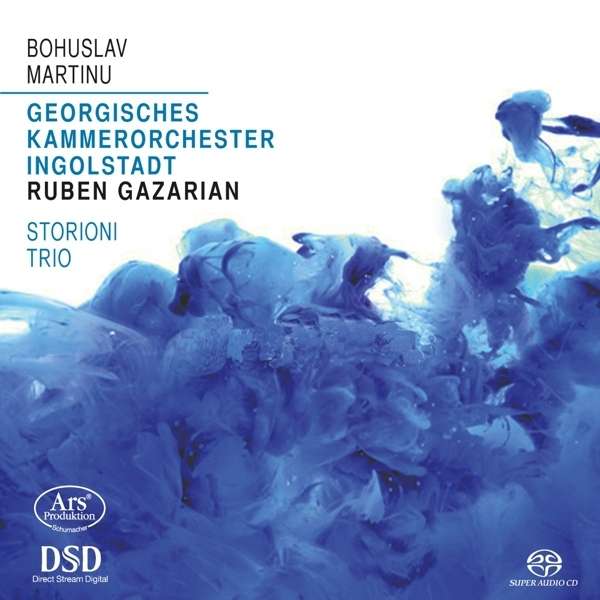 In 1990 the full complement of the Georgean Chamber Orchestra moved to Germany, resettling from Tbilisi to Ingolstadt in Bavaria, where this orchestra-in-excile ended up becoming the “Georgisches Kammerorchester Ingolstadt”. They did very well for a long time, but after a difficult period in recent years, they were able to regain their original confidence and character under their inspirational new Chef, Ruben Gazarian, the successful conductor of the Wurtembergisches Kammerorchester Heilbronn. Two ARS-Produktion recordings, made in 2015, give evidence of the surprising quality of this orchestra, which, until this very day, has remained almost 100 per cent Georgian, with the exception of maestro Gazarian, who is of Armenian origin.

For this second recording, and as a further implicit sign of the orchestra’s quality, the services of the famous Storioni Trio could be secured for the solo parts in the two main items on this disk: the seldom played Concertino for Piano Trio and String Orchestra (H232) and the more elaborate Concerto (H231), both composed in 1933. The programme is completed by another relative rarity, the Partita-Suite no. 1 for String Orchestra (H212) from 1931.

Although listing 15/16 members, the orchestra sounds more like an extended chamber group, of which each member stands out as a soloist in its own right. Precision and natural balance seems to be the group’s strongest hallmark, thus creating the perfect background against which soloists like the Storioni Trio can excel.

Martinů saw himself as a concerto-grosso man and, this being so, it follows that the two concertos have to be performed accordingly; meaning that the solo trio has to be woven into the overall musical fabric. And that is exactly what Gazarian and the Storioni’s bring about. Switching between solo and orchestral parts is so natural that one is not always aware where -with the exception of the piano, of course- the soloists stop or take over, even taking into account the pinpointing and excellent ARS-Produktion recording, making every single instrument almost visible. However, listening to the moments where the Storioni’s are clearly in command, one notes their intelligently focused contribution to the overall result, without, as is so often the case, insisting to be recorded ‘up front’. The beginning of the second movement of the Concerto H231 is in this respect a fine, but certainly not the only example.

For those less familiar with the music of Martinů I should add that his music follows a more classical, tonal model than that of some of his avant-garde colleagues in those days. It may be labeled as classical-modern or, as some prefer, neo-classical. But whatever the case, his music is quite accessible for most of today's audiences. Increasingly so, it would seem to me.

Notwithstanding the fact that Bohuslav Martinů left his home country in 1926 for a fresh start in Paris, where he, among other things, acquainted himself with expressionism, his music continued to breathe Moravian and Bohemian culture. And another interesting element worth mentioning is that Martinů took lessons from Albert Roussel, who, it is said, never tried to impose any of his personal ideas on him, but, on the contrary, encouraged Martinů to further developing his own style. But I cannot help hearing elements reminding me of this French composer. Chauvinism? Possibly.

All three compositions stem from that period. The result is that we have, at least as far as the two concerti are concerned, a mix of a concerto-grosso, built on Czech (folk) roots and modeled after ‘contemporary’ French painting. A most intriguing, musical experience; difficult to explain in words, one simply has to listen to it. And upon repeated listening one gets even hooked on the originality of Martinů’s quasi-simple scoring.

The closing item, the partita, may best be described as a neo baroque festive suite, and Gazarian and his chamber players don't leave any doubt about that: wonderfully pleasant music making. A worthy close to a well programmed and commented disk, for which I may refer to the liner notes.

While these compositions may not belong to the top of the Martinů hit list, they do not only give an eminent insight in the Paris phase of his life and work, but would also constitute a great start for potential adepts to familiarize themselves with what this prolific composer has furthermore to offer.

Interestingly, there is one other recording of both concerti in Super Audio (Martinů: Rhapsody Concerto - Zimmermann, Conlon), released in 2005, which I do not know and, therefore cannot comment on, but this present disk can, in any case, be safely recommended and I, for one, and I'm sure others with me, shall be looking forward to more ARS-Produktion initiatives in these and similar fields. After so many Beethoven’s, Mahler’s and what-have-you’s, the Hi-Res catalogue is surely in want of more 20th century composers of likewise stature.

Playing, recording and choice is all top rate, but as the level of recording is somewhat higher than usual, some adjustment may be needed, depending on how you listen.

I'm looking forward to this release, from the same ensemble and conductor as Honegger: Symphony No. 2 / Bloch: Baal Shem - Schatz / Chien / Gazarian. 20th-century repertoire has not been as widely surveyed in hi-res as the 19th (other than Mahler symphonies). This will be only the second SACD of the Concertino.

Hi Mark,
I have it since yesterday and it is excellent stuff. I will do a review; soon, time permitting

Adrian, as you pointed out in your review of Mozart: Bassoon Sonata / Devienne: Basson Quartets - Rácz / Merel Quartet, ARS Produktion is providing a cultural service by recording and distributing the work of younger performers and regional ensembles who do not have brand-name status. I have most of the Storioni Trio's SACDs for Pentatone and Ars, all of which I recommend. I'm looking forward to hearing the Martinu disc, which is scheduled for US release by the end of this month, and to your review.

The performances on the Conlon disc are very fine, but the recorded sound is somewhat thin. I'm looking forward to this one.