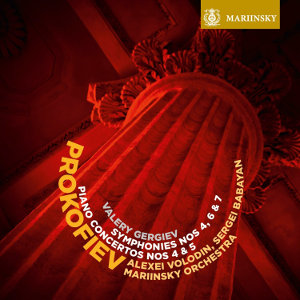 
This major release launches the Mariinsky label’s projects to honour the 125th anniversary of Prokofiev’s birth. A long-time champion of the music of Prokofiev, Valery Gergiev conducts Symphonies Nos 4, 6 & 7, coupled with Piano Concertos Nos 4 and 5. The result is a 2-SACD set programmed to showcase some of Prokofiev’s finest works written before and after the Second World War.

Prokofiev began his 4th Symphony in 1929, drawing from the musical material of his ballet 'The Prodigal Son'. The Symphony was premiered the following year, though he substantially revised the work 17 years later. Symphony No. 6 was written in 1947 as an elegy to the tragedies of World War II. Speaking of the Symphony, Prokofiev said, "Now we are rejoicing in our great victory, but each of us has wounds which cannot be healed. One man’s loved ones have perished, another has lost his health. This must not be forgotten." The 7th Symphony was completed in 1952, a year before the composer’s death. It was well-received and was awarded the prestigious Lenin Prize in 1957 at Miami’s Knight Concert Hall.

Acclaimed for his highly sensitive touch and technical brilliance, Alexei Volodin performs Prokofiev Piano Concerto No 4. Premiered in Berlin in 1956, by the West Berlin RSO, it was written for the one-armed pianist Paul Wittgenstein, and was the only one of Prokofiev’s piano works that was not performed during his lifetime. Alexei Volodin’s performance was described as "superbly controlled and beautifully subtle" by The Guardian.

The American-Armenian musician Sergei Babyan performs Prokofiev’s last complete piano concerto, No 5. The Telegraph reviewer was sufficiently moved to say: "Never have I seen so many fast and furious hand-crossings, so many dizzying flights from top to bottom of the keyboard, all performed flawlessly".

Valery Gergiev is on record as naming Prokofiev as his favourite composer, and his impeccable credentials in the interpretation and championship of the Russian master over decades hardly need stating. It is also fair to say that no other living conductor has had as much experience both in the opera house and concert hall performing this composer's oeuvre.

On this exceptionally generously filled two-disc SACD set (81'02 and 77'22) Gergiev and his Mariinsky Orchestra provides a veritable feast of the composer's works – three symphonies plus two of the less frequently played of his five Piano Concertos – the latter given in thrilling performances from two of what seems to be an inexhaustible supply of Russian-trained virtuoso pianists.

The first item on Disc 1 is a wonderfully mercurial account of Prokofiev's 'Piano Concerto No. 4 for the Left Hand' from Alexei Volodin. This was written in1931 at the request of the pianist Paul Wittgenstein who had lost his right arm during the Great War. When he received the score from the composer Wittgenstein's response to it was: “ Thank you for the Concerto, but I do not understand a single note and shall not play it.” Volodin's fluent and apparently effortless pianism, matched by the alert accompaniment from Gergiev and his superb orchestra, make a most convincing case for this unjustly neglected work.

Two years later Prokofiev composed the last of his Piano Concertos as a vehicle to perform on his concert tours, and he gave the first performance in Berlin with Wilhelm Furtwängler and the Berlin Philharmonic Orchestra. Written in five movements with a short vigorous central Toccata the angular nature of its many short themes and almost unrelenting dynamism makes it a more difficult work to grasp easily. The American-Armenian pianist Sergei Babayan brings his formidable technique to bear on the piece and his performance captures both the sardonic wit of the 'Moderato ben accentuato' (tr. 6) and the lyricism of the 'Larghetto' (tr. 8) most successfully. As in the previous work the orchestral part is delivered with crispness and energy by Gergiev and the Mariinsky players.

A thrilling account of Prokofiev's 4th Symphony completes this first disc. The work was commissioned in 1930 by Koussevitsky for the fiftieth anniversary of the Boston Symphony Orchestra and drew on music from the composer's recently completed ballet 'The Prodigal Son'. In 1947, however, Prokofiev substantially re-wrote the work almost doubling its length and giving it a new opus number (Op. 112). It is this revised version that is heard here. Gergiev's tempi in all four movements are more urgent than those on a recent recording by Marin Alsop Prokofiev: Symphony No. 4 & The Prodigal Son - Alsop and with strongly idiomatic playing from his well-drilled Mariinsky Orchestra he makes a compelling case for this later version of the Symphony.

Gergiev's darkly introspective realization of the 6th Symphony unfolds gradually and without haste; his broad tempi in both of the first two movements forcefully emphasising the tragic nature of the work to the nth degree. The intensity of the orchestral playing is phenomenal – the weighty Russian brass sounding especially baleful in the first two movements. In the high spirited finale Gergiev's energetic pace brings a convincing contrast with the two previous movements, yet he also manages to convey the the music's underlying unease that eventually builds to a crushingly searing climax.
It has been interesting to compare this version of the 6th Symphony with the only other currently available one on SACD from Andrew Litton and the Bergen Philharmonic Orchestra Prokofiev: Symphony No. 6, Lieutenant Kijé, Love for Three Oranges - Litton. Timings do here give a pretty good indication of the two conductor's differing approaches to the work.

Litton is beautifully recorded and he elicits cultured playing from his Bergen orchestra, but for this listener the insights Gergiev brings to the Symphony in his intense and committed, if marginally less polished, performance wins the day.

The 7th Symphony (1951-52) was commissioned by the Children's Division of Soviet Radio and has sometimes been characterised as an attractive and easily assimilated work that though richly melodic possesses little if any of the emotional depth of its predecessor. Gergiev has no truck with that view, as his glacial and broadly paced account of the symphony demonstrates. He convincingly conveys both the underlying bleakness of the piece and the poignancy and aching beauty of the music. Only in the final 'Vivace' do the dark clouds disperse, though it comes as no surprise that he opts for Prokofiev's original slow enigmatic ending. For a conductor often accused of brusqueness and haste in many of his performances, here he lovingly phrases and caresses the melodies while at the same time bringing powerful structural coherence to each of the four movements. Once again the Mariinsky players respond with fine playing.

Piano Concerto No.4 and Symphonies 4 and 6 are DSD recordings made in the Mariinsky Concert Hall in 2015, while Piano Concerto No.5 and Symphony 7 were recorded live (PCM24bit / 48kHZ) in the Moscow Conservatory as part of the Moscow Easter Festival 2012. Though these performances took place over a period of three years in two different venues, the sound is remarkably consistent and vivid.

This impressive release marks a most auspicious start to the Mariinsky label's projects to honour the 125th anniversary of Prokofiev’s birth and should be heard by all who admire this composer's music.

...that we have another 6th on SACD so soon after the Litton release that has caused such controversy. Clips of this new recording are up on-line and from first auditions Gergiev has found the jagged edged, dispassionate almost hostile sound that seems more appropriate for Prokofiev's music and which clearly eludes Litton. This disc has been a long time coming since first announced and I for one cannot wait! Hopefully a second set of discs will complete the survey.

The samples sound great indeed-- the heavy, dark opening of the slow movement of the Sixth is hopefully a good sign…...

Is this double CD packed in a digipack ? Thanks

I should receive my copy on Monday or Tuesday so will advise on presentation asap.

The two discs are presented in a double CD jewel box (single thickness).

Confirmed as Graham has described.

Not quite the bargain it seems and will be a major disappointment from many. Inexplicably for a new survey Mariinsky have included two much earlier recordings from 2012 into this two-disc set, the 7th Symphony and the 5th Piano Concerto and to rub salt into the wound these we're recorded in PCM at the not much better than CD rate of 48kHz / 24 bit. It shows or rather 'hears' as well as even more inadvisedly they have mixed the DSD and PCM recordings on both discs so that even to the most committed naysayers, the differences between DSD and PCM are starkly revealed; it makes for a most uncomfortable evening's listening if one chooses to listen to each disc in a single session.

The highlight for me is the 6th Symphony as Gergiev strips bare any sentimental romanticism some see in this work to reveal perhaps the tortured soul of a Russian patriot forced to leave his beloved country. Compelling if fraught and uncomfortable, emotions clearly understood and felt by conductor and musicians alike. Worth it for this alone but the 4th Piano Concerto played by Volodin is arguably the best yet in any format, emphatic yet gently sensitive, a gem.

Can someone list the recording team for the various performances on this set?

I'm not as troubled by the sonic discontinuities as hf. While differences exist they're not overwhelming, at least in multichannel, and no mc listener should be put off if the set otherwise appeals. I have never been a big fan of Gergiev, usually finding him crude, but I was pleasantly surprised that while his overall approach to the symphonies is quite grim the lyrical sections are rendered with considerable tenderness. It's very effective. I continue to believe he's not a very sympathetic accompanist, and I find the concertos the least attractive parts of the set through no fault of the pianists. Overall in my book 4/4. 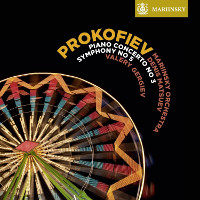