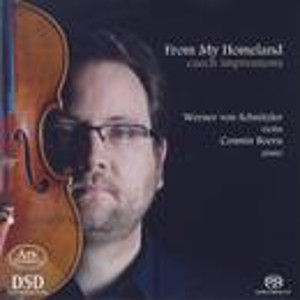 Ars-Produktion’s forthcoming issue of Czech impressions under the title ‘From My Homeland’, lining up a number of smaller pieces for violin and piano, follow a similar pattern as the ‘135 Years of Czech Composers’ by the QuintOne label 135 Years of Czech Composers - Smeulers, Sittig# recording . Missing are Fibich, Martinů, 5 Madrigals, Novácek and Schulhoff; extra is Martinů, from: 7 Arabesques. QuintOne fill two disks as against ARS-Produktion only one.

The sub-title ‘Czech Impressions’ is well chosen, because we have here a selection of simple and less simple pieces mainly related to, or mixed with Czech folk music, with the exception of Dvořák’s sonata Op. 100. Both artists, Werner von Schnitzler and Cosmin Boeru are new to me.

My first question: Was Werner von Schnitzler a ‘Wunderkind’, playing in his youth all sorts of devilishly daring pieces? There is no mention in the liner notes of him having been invited to play at Yehudi Menuhin’s 75th birthday concert, Bonn 1991, together with such eminent soloists as Daniel Hope, Cyprien Katsaris and Ulf Hoelscher, to name but a few. Only 12 years old did he play for this violin icon (with his mum at the piano!) Pablo de Sarasate’s Zigeunerweisen. The liner notes do mention, however, that he won numerous prizes; listing as well all the prestigious orchestras he has played with.

Failing to find on the internet traces of any recent concert performances, I did some further research and found the following question on the site of ‘violonist.com’: “Does anybody know young German Violinist Werner von Schnitzler? I heard him in a concert twelve years ago when he was about 14 and it was absolutely incredible. Is he still performing? Does anybody know what he is doing now?” That was in 2006. Three years later someone answered: “I heard him too. He is incredible!! He is teacher at Musiekoschulen (text copied as is) of Cologne but he did not a career. I don't know why”. Followed by someone else saying: “I had the good fortune to play with Werner at a chamber music festival in Cornwall. In addition to being a fantastic violinist, he is also a really kind person”.

That says it all in a nutshell. I, too, cannot tell why he gave up his concert career for the more intimate chamber scene, but whatever the reason, it suits him very well. Real talent does not get lost, as I can confirm by having now listened to this violinist. Even the simplest pieces, like Dvořák’s Romantic Pieces Op. 75, written for debutant violinists, gain so much in quality if played by someone who has ‘it’. Difficult to say what it is, but one hears it immediately. A violin is like a human being; it has a personality and it needs to be treated like one to make it sing. I compared these pieces with young Itzhak Perlman’s 1985 EMI interpretation and was astonished to find out that, however well he played, he was neither able to extract the same ‘singing’ in the Allegro appassionato (No. 3), nor the ‘soul’ in the Larghetto (no. 4) as Werner von Schnitzler does.

(As to a clue to interpretation: In its original version for 2 violins and viola, Op. 75a, No. 3 carries the title ‘Romanza’ and No.4 ‘Elegia’; A 1999 recording for Supraphon by members of the Panocha Quartet is a wonderful disk of these and other Dvořák miniatures, my recommendation of which falls, unfortunately, outside the scope of this site).

This sets the tone for the rest of the recital. We clearly have here a very sensitive fiddler, who can, like a chameleon, shift moods as needed from rain to shine, drawing maximum emotion out of each work or movement thereof.

Other ‘drobnosti’ on this disk, like the 4 Four Pieces for violin & piano Op. 17 from Jozef Suk, the 3 (out of 7) Arabesques H. 201 from Bohuslav Martinů and the Larghetto from sonatine Op. 100, which Dvořák wrote for his children during his tenure as director of the National Conservatory of Music in New York City, follow a similar trail of changing and expressive moods, adequately brought out by von Schnitzler. The same applies to the two pieces from Bedřich Smetana’s ‘From my Homeland’, which are light in style and, according to a note by the composer, “more intended for domestic use than the concert hall”.

Then there is a ‘major’ composition: Leoš Janáček’s violin sonata, which took him almost 10 years to complete with a final, fourth version. Composition started in 1913, during the First World War, which he lived through as a staunch supporter of the Russian army fighting the Austrian forces. Many Russian (folk) elements are noticeable in this war inspired sonata. Von Schnitzler’s rendition is revealing and convincing.

Intrigued as I was by Werner von Schnitzler, it is by no means my intention to underestimate Cosmin Boeru’s contribution. On the contrary, he creates the perfect ‘mirror’ for him (von Schnitzler) to shine.

An attractive programme by excellent performers worth every penny! 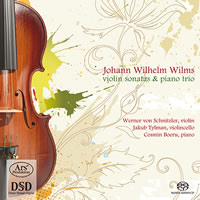