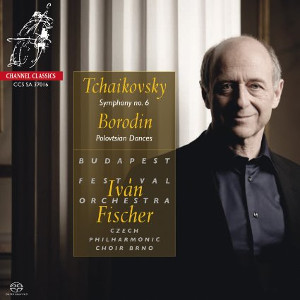 It is now more than ten years since Ivan Fischer and his crack Budapest Festival Orchestra recorded a Tchaikovsky symphony for Channel Classics. Back then it was the 4th Symphony, Tchaikovsky: Symphony No. 4 - Fischer a version that while widely praised did receive minor criticism in some quarters for a couple of idiosyncrasies in Fischer's conducting.

Over the intervening period both Fischer and his orchestra have produced a series of outstanding recordings that clearly illustrate how this conductor has now become, more than ever, a facilitator who brilliantly links the composer and composition with us the listeners. His interpretive ideas, underpinned by a fierce musical intelligence, have increasingly become a means to that end rather than representing any attempt at self-aggrandizement.

From the first few bars of this breathtakingly poised and lucid account of Tchaikovsky's 6th Symphony one is immediately struck by the sheer beauty of the sound that perfectly captures the carefully graded dynamics of the refined Budapest strings, whose typical leanness enhances their athleticism displayed later in the movement. Fischer's tempo for the introduction is towards the faster end of the spectrum, and as the movement progresses it quickly becomes clear that he is keen to avoid any charge of sentimentality or over-emotional indulgence.

The second movement (Allegro con grazia) is often described as a 'limping waltz' due to the irregularity of of its metre, but here it flows with balletic grace and boundless elegance at Fischer's agreeable unforced tempo whilst the lamenting central section is not given undue emphasis as on some recordings.

In keeping with his cool approach, Fischer takes the third movement at a surprisingly measured pace – the movement lasts 9' 44” here compared with an average of eight and a half minutes for the comparative versions that I had to hand. It does not, however, seem slow thanks to the impressive technical precision and crisp articulation of the BFO's playing. The march is jaunty and dogged rather than raucously euphoric, though there is no lack of excitement thanks especially to the vivid cymbals and bass drum capped climaxes.

Fischer's superbly controlled account of the finale is searingly passionate, possessed of a radiant beauty and refinement, yet it remains in keeping with his unsentimental response to this work. The pacing is assured with the build up of tension skilfully handled right through to the movement's dramatic climax with caustic stopped horns and a perfectly judged soft tam-tam stroke, while the insistently pulsing double basses in the closing bars give a sombre finality to the movement that is unusually striking and effective.

With a symphony as often recorded as this, it is a futile exercise to try establish a pecking order even amongst recent recordings of the work, but it is fair to state that this consummate account from a charismatic conductor and one of the finest orchestras around will suit those who wish for a more objective and less heated account of Tchaikovsky's final symphony. It is certainly one that stands out even amongst the huge recorded archive available on disc. The marvellously realistic and impeccably balanced sound quality of Jared Sack's 5.0 multi-channel DSD recording on this SACD can be taken for granted, and while the sonic allure of this SACD will be enough for many, when combined with the cool fluency and unforced naturalness of Fischer's interpretation it is worth consideration even by those who have multiple version of this work.

In the context of Fischer’s compelling performance of the Tchaikovsky symphony, the addition of Choral Dance No. 17 from Borodin’s opera Prince Igor commonly known as the ‘Polovtsian Dances’ seems largely unnecessary and arguably inappropriately placed, following Tchaikovsky’s death permeated ‘Adagio lamentoso’. These popular dances are performed here in their full choral version; the sweet-voiced ladies and full-throated gentlemen of the Czech Philharmonic Choir of Brno certainly making an impressive addition to the colourful and luminous orchestral sound. As with every version of this popular encore that I have ever heard the words being sung in praise of Khan Konchak are quite unintelligible, but the liner notes do provide an English translation of them. The playing of the BFO is so thrilling that it is a pity the Overture to the opera and the Polovtsian March were not included to make a more substantial fill-up than the rather meagre 12 minutes provided here.

Decisions, decisions! Just having got the recent Honeck, do I really need another to my collection of 6ths?
Your review Graham is very tempting.

Channel have put this one in a super jewel box case - at last a move away from those fragile and ill-disciplined digipacks. Presumably this is the cheaper option for Jared but for me it offers much better presentation and protection of the disc; it was great pity that digipacks were ever introduced for Ivan Fischer's discs.

John, do you have a choice? This IS Ivan Fischer we are talking about!

A direct comparison of the Honecker and Fischer would be of interest.

This comment is for hiredfox. I love those Super Jewel Boxes, but alas, it appears that they are much more expensive and the manufacture of them in North America has ceased. Have patrolled the internet attempting to find them for sale at a reasonable price with no luck. Shipping is ludicrously priced. Does anyone here know where they can be purchased without paying a king's ransom for them? I should probably mention I live in Canada, so it looks like I would need to import them and fees have really gone up in recent years.

Try this link, seems fairly priced to me. As we seem intent on giving away our £ sterling you shouldn't find these too expensive. John 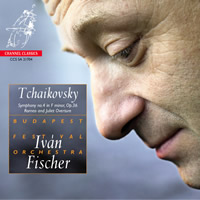