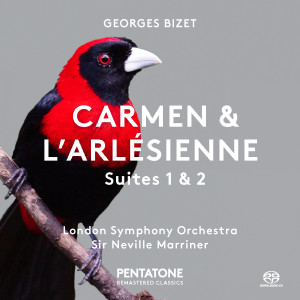 
Georges Bizet, unfortunately for himself, belongs to a group of illustrious composers such as Mozart, Schubert and to a certain degree J.S. Bach who didn’t get to experience the enormous and enduring success of their music during their own lifetimes. Bizet died a sudden and untimely death in June 1875, only three months after the unsuccessful première of his opera Carmen at the Opéra-Comique in Paris. The opera’s première in Vienna in October that same year was a global triumph. Consequently, even though it only took a few more months for Carmen to become an instant success, Bizet didn’t live long enough to see his fame established.

The two Carmen suites were put together after Bizet’s death by a former fellow student of his, Ernest Guiraud. These suites can easily be called a collection of Carmen’s ‘greatest hits’. On this album they are combined with the Arlésienne suites No. 1 and 2, Bizet’s other hugely popular set of orchestral suites, which are taken from the incidental music he composed for L’Arlésienne, a tragedy by French novelist Alphonse Daudet.

In this 1978 recording of the London Symphony Orchestra conducted by Sir Neville Marriner the suites are performed by one of the world’s most renowned orchestras coupled with one of the most distinguished conductors of the 20th century.

PENTATONE'S remastering on SACD of quadraphonic recordings from the Philips catalogue in the 1970s have unearthed many wonderful performances that have been rejuvenated by the use of DSD technology and multi-channel SACD. In technical quality this latest release of four popular Bizet Suites does not disappoint in any way but unfortunately the performances do.

The two Suites from Bizet's opera 'Carmen' and the equally engaging pair taken from the incidental music he wrote for Alphonse Daudet's play 'L'Arlésienne' – heard here in the familiar arrangements made by Ernest Guiraud – are available in countless versions, including many on SACD. Any newcomer, therefore, needs to offer something special to tempt collectors.

For the record, Marriner changes the usual order of items in the first Carmen Suite and in the second omits the lovely 'Nocturne' movement altogether. Though it would be hard to level any criticism at the cultivated orchestral playing, Mariner's rather four-square conducting suggests that the orchestra was on auto-pilot for these sessions. This was the first recording that Mariner made as a conductor of the LSO, a body in which for many years he was a member, so it is perhaps surprising that he was unable to inspire his colleagues to deliver something more than efficient but routine performances of music requiring much greater interpretive style and élan.

On the plus side the sound is remarkable for both its vividness, clarity and warmth, a tribute to the efforts of the producer Vittorio Negri, the (unnamed) recording engineers and the fine acoustic of Walthamstow Town Hall where these recordings were taped in June 1978.

There are better alternative recordings of these pieces to be found in the catalogue including, in the case of the 'L'Arlésienne' Suites, the version by Kazuki Yamada also on the PENTATONE label Bizet: L'Arlésienne Suites - Yamada.