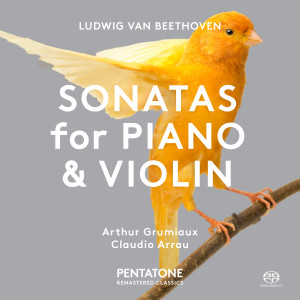 
With this release, PENTATONE presents in its Remastered Classics series another album where musical titans are at work. No less than Chilean pianist Claudio Arrau, generally considered to be one of the greatest pianists of the twentieth century , and Belgian violinist Arthur Grumiaux, the most important representative of the Franco-Belgian violin school as well as a truly great violin virtuoso, joined forces in Amsterdam in 1973 to record the Beethoven piano and violin sonatas Nos. 1 and 5.

No composer before Beethoven treated the two instruments as equally as he did in his sonatas for piano and violin. In 1797 Beethoven embarked on a journey of writing ten sonatas for this combination. In the first sonata of his oeuvre of 10, a festive piece with a theatrical-dramatic opening, the two parts are already very much integrated. The violin has clearly lost its role of accompagnato instrument. By the time just a few years later that Beethoven composed his fifth ‘Spring’-sonata, one of the most beloved and lyrical pieces of music ever written by him, the piano and the violin had reached a complete synthesis. This unprecedented integration is magnificently revealed by Arrau and Grumiaux on this newly remastered multi-channel Philips Classics recording.

In the late 1950s the distinguished Belgian violinist Arthur Grumiaux (1921-1986) and the pianist Clara Haskil recorded, in mono, a highly regarded complete set of the Beethoven Sonatas for Piano and Violin for the Philips label. Its success was such that in 1975 Grumiaux undertook a new stereo cycle with the Chilean pianist Claudio Arrau as his partner. Unfortunately, only six of the nine sonatas were ever recorded and it is two of those that appear on this PENTATONE re-mastered quadraphonic SACD.

As one might expect Grumiaux's performances of both sonatas are poised and elegant, imbued with the marvellous fluency and sweetness of tone for which he was famous. Surprisingly, Arrau seems to prefer to take the back seat in this partnership and his playing seems rather reticent, with a seriousness that at times contrasts uneasily with the violinist's appealing lightness. This is more apparent in the “Spring” sonata than the early D major work; nevertheless, as one might expect, the music making is of the highest quality.

The sound is fairly closely miked, with a wide stereo spread, but also a slight dryness, in spite of the performances having been taped in the Concertgebouw, Amsterdam (March 1975). PENTATONE's re-mastering of the four-channel original is very good indeed, but the presentation is marred by an unfortunate error that one hopes has not been duplicated on all copies of this SACD.

Both the liner notes and CD case indicate that Sonata No. 5 in F Op.24 “Spring” comes first and is followed by Sonata No. 1 in D Op. 12 No.1, but on playing my copy of the disc I found the reverse to be the case. So, confusingly, the track numbers and timings given for each of the movements in the booklet don't correspond to the work to which one is listening.

The total playing time of this disc is only 45'22”, which is rather short measure for a full price release, but admirers of the artistry of Grumiaux and Arrau will find much to enjoy here, although it must be admitted that there are more recommendable versions of both sonatas available on disc.

I see that the 2017 releases by Pentatone are up on their website.
Not many remastered classics and a surprising amount of opera.

John, the list is still in preparation. They will add more Remastered Classics albums as soon as they're ready.

I'm just excited to see a new Elgar cello concerto at last, though Andrew Manze seems on odd choice of conductor, not to mention a couple of Haydn discs, the Zarathustra, and the de Falla. The Tyberg and Kodama duo discs were already on my wish list. This "release planning" list is one of the things I've always appreciated about Pentatone.

I strongly agree with you, William. Finally we will receive a valuable hi-res Zarathustra! Humperdinck's "Hänsel und Gretel" will be another gem. It is very interesting to see the future albums of the label.