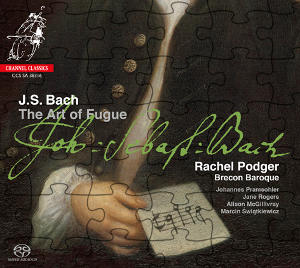 Bach: The Art of Fugue

For her latest release on Channel Classics, Rachel Podger turns to Bach's late masterpiece 'The Art of Fugue'. She is joined in this enterprise by the four key members of her expert period ensemble Brecon Baroque: the violinist Johannes Pramsohler (who also plays second viola), Jane Rogers (viola), Allison McGillivray (cello) and Marcin Świątkiewicz (harpsichord).

Bach began to assemble the constituent parts of 'The Art of Fugue', in the early 1740s, but it remained unfinished at the time of his death in 1750. The work comprises 14 fugues and 4 canons, each based on a single subject, and though he did not specify an order for the pieces, they are usually performed in order of increasing contrapuntal complexity. But as so often with a work left incomplete at the time of a composer's death many intriguing questions are left unanswered. In this case the main one is that because the work is written in open score and Bach did not indicate any instrumentation then how should it best be realised for performance? For the majority of recorded versions the answer is on keyboard instruments (harpsichord, piano or organ), but the use of other instrumental combinations is equally valid as demonstrated most successfully on this compelling SACD.

Rachel Podger and her colleagues are justly celebrated as exceptional artists in the period performance field and they deliver wonderfully expressive performances of each of the eighteen fugues and canons that make up Bach's astonishing work with a technical finesse that is beyond reproach. The varied combinations of string instruments used here add spice and variety to each of the pieces. There is a rich mellownness to the string sounds and throughout the players ensure that every line is clearly defined so one can follow even the most complex strands with ease. Special praise is due to Marcin Świątkiewicz for the fluent and thoughtful playing of his two alloted solos, the Canon alla Duodecima (tr.13) and Canon alla Decima (tr.15). The final fugue (Contrapunctus14) is performed unfinished, as Bach left it, a poignant reminder of the transience of life.

It need hardly be stated that Jared Sacks's multi-channel DSD recording is, as always, state-of-the-art, capturing the warm acoustic of London's Church of Saint Jude-on-the- Hill to perfection and giving the instruments an almost holographic vividness set within a realistic sound stage.

Scholarly and thought provoking notes by John Butt complete a most desirable issue.