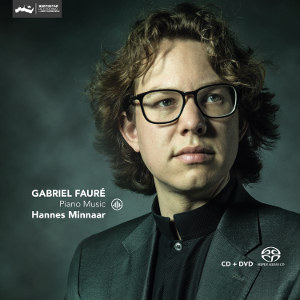 
Thirteen Nocturnes and as many Barcarolles form the core of the collected output of Gabriel Urbain Fauré (1845-1924) for the piano. Night-time meditations, then, along with inspiration drawn from rippling water (the origins of the barcarolle lie in the songs sung by Venetian gondoliers and the word itself comes from the Italian ‘barca’, a boat). Along with some impromptus, preludes and other works, one might rapidly gain the impression of a delightful collection of salon music, whose titles may actually display the influence of Chopin (Fauré was even to write a Mazurka). But this music is so very much more than pretty salon music. In the intimacy of these genres, Fauré succeeded time and again in nothing short of exposing his very soul. And the French composer’s style is entirely his own – original and personal – from the first note to the last.

(The DVD contains a concert performance of the recital.)

Not so long ago I had the pleasure of reviewing a couple of Challenge Classics releases with Hannes Minnaar as soloist. Beethoven was on the menu and he did very well. Together with Isabelle van Keulen: Beethoven: 10 Violin Sonatas - van Keulen, Minnaar and Jan Willem de Vriend: Beethoven: Piano Concertos 1 & 2 - Minnaar / de Vriend. In this album he is turning his attention to Fauré. The right choice for him?

In 1983 a French pianist, Pierre-Alain Volondat, won the ‘Concours Reine Elisabeth’ in Brussels. He would seem best qualified for Fauré’s piano oeuvre. He recorded his Barcarolles, Préludes and Impromtus for Naxos, but then disappeared almost completely from the international scene.

Comes Hannes Minnaar, also a Lauriat of the same contest (2010). He isn‘t French. He is from The Netherlands. But the Jury was more than pleasantly surprised with - unusual for such contests- his choice for the finals: Saint-Saens’ fifth piano concerto. It got him a third prize and it gave him his French credentials, of which we get here further proof.

His Fauré is not Volondat’s, it is played with masterly authority. Where Volondat floats poetically gives Minnaar us a firm toucher and an undeniable presence. Thus lifting Fauré from salon to concert venue. This is not to say that he lacks poetry. On the contrary. But his poetry is without ‘softness’; it’s more convincingly encouraging in tone. Like a mother reassuring her child. And besides, Fauré is more than an extension of impressionist painting: “These sets (nocturnes, barcarolles and impromptus) were composed across the decades of his career, and display the change in his style from uncomplicated youthful charm to a final enigmatic, but sometimes fiery introspection…”.

In this recital all facets of Fauré’s life are addressed; the charm, the poetry, the turbulence and, not to forget, his romantic temperament (to put it mildly). It requires a pianist who is able to encompass all these elements. And Minnaar reveals himself to be such a ‘Jack of all trades’. Comparing Minnaar between then and now, I sense that his maturity is still growing, and what I admire most is his apparent modesty, clearly shunning star status. This attitude is what makes his Fauré so exceptional. It is not the virtuoso aspect he is after. The maturity gives him, as it were, the peace of mind to identify himself with the composers intentions and hence to generate the ability to translate it into a personalized interpretation, making Fauré so wonderfully clear and understandable for his audience.

The right choice? Yes. What more can I say about this recital?

In the liner notes Minnaar writes extensively about Fauré. It makes for interesting, even compulsory reading, to which I’m happy to refer.

For the record: Last September, Hannes Minnaar was awarded the ‘Nederlandse Muziekprijs’ (Dutch Music Award) the most important prize for a Dutch musician. Illustrious predecessors are: Janine Janssen (violin), Quirine Viersen (cello) and Lavinia Meijer (Harp), to name but a few. Fully justified, in my view.

Retirement means more time for music listening. This album was neglected but no more. WOW! Lovely piano music, well recorded and available in multichannel. I was not familiar with the composer. Minnar gives us a walk through time of Fauré's piano compositions from an early age through his passing. I've listened to all of it several times now and find the music enchanting and delightful.

Thanks Mark. I did not know I could change my user name. I am implementing a password manager which is what created the email address user name previously. I've changed it now to my real name which solves the issue.