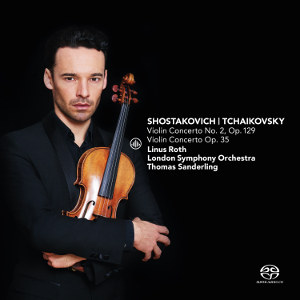 
This is the world premiere recording of Tchaikovsky's Violin Concerto in its original version. There are a few different notes and phrasing bowings than in what is usually played. The most obvious audible difference is that the complete 2nd movement is played with mute, while it has become a tradition that violinist take the mute off for the second theme and therefore for most of that movement. This was never intended by Tchaikovsky. The mute gives the slow movement the feeling and sound of intimacy. Tchaikovsky married but shortly after had a nervous breakdown with depression and tragic aspects. This work is the coming back to life and light, a work of positiveness. His music was strongly connected to his personal life.

Linus Roth has played the piece for 20 years and feels confident to record his unique interpretation.

Shostakovich's 2nd Violin Concerto is a late work by the composer who at that time was already ill and knew that his life would be soon over. The conductor of the recording, Thomas Sanderling was a close friend of his and remembers him well in his late years. Clearly this is not a funny piece, but that is only the surface,because deep down in the music one can find a lot of hidden pain. And to have Sanderling conduct it was memorable as he could provide musical insights only somebody who knew the composer personally can provide.

What is so special about Linus Roth ? Ever since I heard him for the first time I have been taken aback by his musicianship. There are many more that can play the violin and we all have our favourites. But what I particularly like about Roth is that he doesn’t seem to use the music for letting his own star shine. He isn’t playing to serve the grandstand but to serve the composer; he is, for me, a true interpreter. And the two violin concerti on this recording give ample proof of it.

To start with Tchaikovsky, the second concerto recorded here, it is played in its original version. With so many recordings around it seems like a gimmick to attract attention. But just like last year’s Myrios recording of Tchaikovsky’s first piano concerto played by Kirill Gerstein and James Gaffigan, which, by the way, is mentioned here in the liner notes, it does not at all seem to have played a decisive role. I think the motivation of wanting to go back to basics comes closer to the truth. Going back to the original in as far as possible, as Jens F. Laurson explains in his extensive and learned notes. Most of the differences (and there aren’t that many) will not be heard by the occasional listener, with perhaps the exception of the slow, middle movement, played ‘con sordino’ (with the mute on) in its entirety, preserving its intimately romantic sound throughout.

Roth takes a leisurely pace, with great precision and almost unbelievable ‘justesse’. Playing on a good violin (The 1703 ‘Dancla’ Stradivarius) is, in itself, not good enough. They only come to life in the hands of a careful player. If treated well, as Roth does, these violins will give their very ‘lush’ best. And that is exactly what we get here.

There is no doubt about his virtuoso aspect, but Roth already is beyond that. Tchaikovsky’s so very popular violin concerto is not played like contenders in a violin contest do (and what many people like, let’s be honest). Speed for the sake of it is not a sign of quality; it rather hides quality; the quality of the composition. And that’s were, to my firmest conviction, the secret of Linus Roth lies: He gives us back the music, not the acrobatic thrill.

I compared with several other recordings; Julia Fisher’s rendition on Pentatone amongst them, because of a similarity in musical attitudes. Julia’s is beautiful and more traditional. Both are qualitatively at par, be it that I prefer the clarity and the warmth of the Challenge Classics recording. This time not Bert de Wolf’s Northstar Recording Services, but the Belgian Serendipitous and Steven Maes.

At the other end of the scale we find Christian Tetzlaff, on Pentatone as well. He is the perfect acrobat, rushing at high speed through the third movement. Worthy of any contest final, but giving little in terms of intrinsic, musical value. He is more than 22 per cent faster than Linus Roth, turning ‘Allegro vivacissimo’ into a kind of ‘presto prestissimo’. I’m sure some will like it, but it makes me nervous. Gluzman/BIS is in the fast lane, too. His playing is spectacular, but in the final movement the orchestra is not always able to follow suit.

Moving on to Shostakovich Roth has the advantage of a conductor who knew him personally. This assures an authentic rendition of this not so often recorded second violin concerto. By coincidence BIS will release this concerto, together with Shostakovich’s first, but unfortunately I cannot make a comparison as it is, as yet, not available. And after having listened to Roth, I wonder if I will need another one.

It is not an easy work, it’s grim and somber; it may not have the grandeur of the first, reason perhaps why it is less recorded, but it does have a distinct force of emotion. After Stalin's death in 1953 and years of cultural oppression, keeping his first violin concerto under wraps till 1955, more freedom was allowed to blossom, and Shostakovich could portray his own, inner self, meaning that his ailing health has not failed to leave a decisive imprint. People do not always understand what is behind his notes. But is has a crucial bearing on interpretation. Simply put: there is so much more than meets the proverbial eye, and it needs a receptive musician to bring it to the surface.

After Tchaikovsky, I don’t think I need say more about Roth’s style. Especially how carefully he plays and how well he understands the material he performs. Here he ably draws a picture of fate and sadness, without becoming melodramatic. Even in the third movement, often mistakenly thought to be witty, but which in reality conceals deeply felt agony, Roth finds the right expression, like the ‘tristesse’ behind the funny face of a clown. Nowhere does his bowing become scratchy (listen to his solo part towards the end of the final movement); it’s all the way spot on. An exceptional quality. In previous releases Roth has shown to be able to read and interpret the soul of a composition, like in Britten, Weinberg, Hartmann, and here he does it again.

We mustn’t forget that much of it is also due to Thomas Sanderling, son of the late Kurt Sanderling, who premiered several of Shostakovich works in Germany. Not only by being befriended with the composer, but also with the family, he has obtained first-hand knowledge of the ‘inside’ of the music, which he ably conveys to the musicians and the soloist. The result is a very affectionate and inspired orchestral support, turning this concerto into an emotional and memorable event, not to be missed by anyone!

With these two concerti Linus Roth has put himself firmly in the top echelon of today’s violinists.

Yes Adrian, a very good recording and an outstanding performance by Linus Roth in the Shostakovich VC2 full of passion and energy and inspired in its fresh interpretation of this work. Made the hairs stand up on the back of my neck. Scintillating! Simply the best version yet on SACD and not by a small margin either.

Not quite so with the Tchaikovsky VC which although played well in a very disciplined performance of both soloist and orchestral accompaniment, fails to ignite passions and interest in quite the same way. No wonder the Shostakovitch gets top billing on this disc. Having said that it is still a very competent performance if not in any way threatening the established pecking order.

Buy this for the Shostakovich alone and accept the Tchaikovsky as a worthwhile bonus to go alongside the other 20 recordings of the latter work that probably you will have in your collection already. Sanderling succeeds very well in drawing the very best from his London players; the change of venue certainly helps the LSO sound, lush strings and sharp percussion in particular.