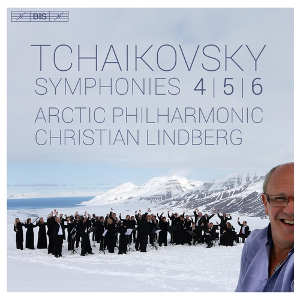 
Tchaikovsky’s final three symphonies form an emotional roller-coaster ride with the most desperate lows (the first movement of the Fourth) and hectic highs (the Finale of the Fifth) before arriving at the resigned lament that is the closing Adagio of the Sixth. As the composer himself readily admitted, he had little interest in writing ‘abstract’ music – to his colleague and friend Taneyev he wrote: ‘I should not wish symphonic works to flow from my pen that express nothing, and which consist of empty playing with chords, rhythms and modulations.’ This has given rise to numerous speculations and attempts to interpret Tchaikovsky’s works, and especially these symphonies, in terms of events in his personal life. While the fruitfulness of such an approach is debatable, it is certain that the immediate appeal of the music itself has caused these symphonies to become favourites with musicians and listeners alike.

On the present two-disc set, it is Christian Lindberg and his Arctic Philharmonic, based in the far north of Norway, that perform the symphonies. While the recordings of the Fourth and Sixth appear for the first time on disc, that of Symphony No. 5 has been previously released (on BIS-2018) on a disc that earned international praise: ‘a superb performance’ was the verdict of the critic in International Record Review, while the French magazine Diapason accorded it top marks.

Symphony No. 5 recorded in January/February 2012 at Harstad Kulturhus, Norway

The booklet includes the following note of Christian Lindberg:

"Since childhood, even before I played an instrument, I was obsessed by the symphonies of Tchaikovsky and I bought all the recordings I could lay my hands on. I was always puzzled by the fact that tempi differed from conductor to conductor, frequently extremely so. It seemed to me as if the different versions of the symphonies were completely different pieces! Later, when reading the scores for the first time, I was amazed to find that Tchaikovsky had supplied absolutely clear metronome markings and I noted particularly that the rubati indulged in by conductors more often than not contradicted the composer’s precise intentions. We know from both Tchaikovsky’s letters and his biographers that the question of tempo was of utmost importance to him, yet it seems that the vast majority of conductors deviate from his metronome markings and this practice has over time become the accepted performance tradition. Thus, my recordings, in which I do stay close to the original metronome markings, will probably be categorized as being ‘different’. I hope, therefore, that you will listen with open ears as I truly believe that every metronome marking is there for a reason".

It is quite a treat to have these symphonies on 2-disc set! The total time of the first disc which contains Symphonies Nos. 4 & 6 is 84'20! Here is the tracklist:

I purchased this set, even though I already had the original issue of Symphony 5 (BIS-2018), which was paired with the Swan Lake suite. I am very pleased with the performance & sound quality on the set, but I am a bit disappointed that the suite was left out this time. It was already recorded and mastered, and it obviously would have fit on the 2nd disc where Symphony 5 now stands alone. There's a lot about the classical music industry that eludes my sense of logic, but it seems to me that they should have either included the ballet suite or simply issued 4 & 6 on a single, lower priced disc.

All that said, I highly recommend this set. BIS have given us very many fine SACDs, and I feel churlish complaining about such small matters. Now, if they'd only get around to some symphonies by Martinu & Raff... 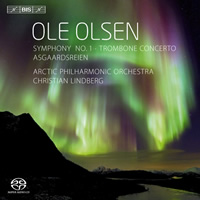 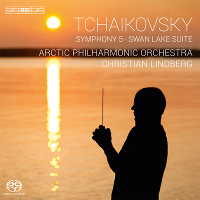 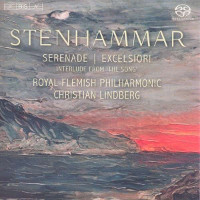