In the Stream of Life: Songs by Sibelius - Finley / Gardner 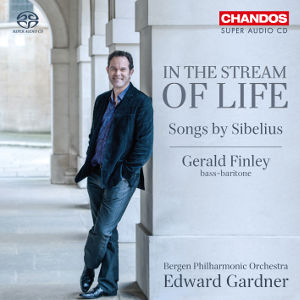 
The exceptional collaboration and friendship between the late Einojuhani Rautavaara and the internationally acclaimed bass-baritone Gerald Finley culminates in this unique album of orchestral songs by Sibelius, on which the Bergen Philharmonic Orchestra is conducted by Edward Gardner. The album offers orchestrations, by Sibelius and others, of songs which Sibelius originally wrote for voice and piano, and includes the premiere recording of In the Stream of Life, seven songs orchestrated by Rautavaara for his friend. Throughout, the poetry perfectly reflects the instinctively felt relation between Finnish nature and Sibelius’s music.

As Finley reveals: ‘the recording of [In the Stream of Life] became a very personal project when the sessions took place only a few weeks after [Rautavaara’s] death, in the same week as his funeral... and I am so thankful that a final addition was made possible when in the last months of his life [Rautavaara] agreed to orchestrate “Hjärtats morgon” and include it in the group.’

In every respect this is a wonderful and very special recording that will undoubtedly be one of my top recommendations for the coming year.

The Sibelius programme on this SACD, in which the performance of the Symphonic Fantasia 'Pohjola's Daughter' serves as a prelude to the fourteen songs that follow, is a splendidly conceived one. The insertion of two further orchestral works – the short 'Romance in C for String Orchestra' and the tone poem 'The Oceanides' – serve to break up the songs into smaller groups and thus provide a most effective contrast with the vocal pieces.

What, however, will make this disc especially interesting to all Sibelius aficionados is the inclusion of the premiere recording of 'In the Stream of Life' a collection of seven songs orchestrated by the late Finnish composer, Einojuhani Rautavaara (1928 – 2016). These particular songs were chosen by Rautavaara with the voice of the superb Canadian bass-baritone Gerald Finley in mind and received their World Premiere on 6th March 2014 in the Grieghallen, Bergen by the artists on this recording. The settings, sung in Finnish, German and Swedish, include the poetry of Ernst Josephson, Johan Ludvig Runeberg and Richard Dehmel, the poet whose output provided a rich source of inspiration for a number of songs by Richard Strauss. The orchestrations by Rautavaara are imaginative and idiomatic, though perhaps closer in texture to his own music than that of Sibelius.

The majority of the remaining songs on this recording were orchestrated by the composer himself with the notable exception of 'Hymn to Thais, the Unforgettable', which was the work of his son-in-law Jussi Jalas and surprisingly was the only song Sibelius ever wrote in English. Familiar favourites such as 'Demanten på marssnön' (the Diamond on the March snow) and 'Kom nu hit död (Come Away, Death) are included, as is a gripping account of 'Koskenlaskijan morsiamet' (The Rapids-riders Brides).

Gerald Finley's performances of each of these songs are quite simply magnificent. He conveys the drama and emotions of the poems with complete assurance and delivers them throughout with rock steady singing, immaculate diction and unfailing beauty of tone. These are certainly interpretations to treasure.

The accompaniments provided by Edward Gardner and the Bergen Philharmonic Orchestra are equally impressive, with playing that matches the commitment and sensitivity of the soloist. Neither does Gardner disappoint the three purely orchestral works included here. He perfectly captures the dark and brooding atmosphere at the start of 'Pohjola's Daughter', aided by wonderfully sonorous playing from the cellos, contra-bassoon and bass clarinet while the strings of the orchestra contribute an elegant and richly nuanced account of the 'Romance, Op. 42'. Finally Gardner gives us an evocative account of 'The Oceanides' one of the most striking and impressionistic, yet least played, of Sibelius's tone poems making a welcome first appearance on SACD.

The recording team of Brian Pidgeon (producer) and Ralph Couzens (sound engineer) assisted by Gunnar Herleif Nilsen from the Norwegian Broadcasting Corporation (NRK) have achieved a recorded balance that convincingly places the soloist's voice in front of the the orchestra without undue spotlighting and admirably recreates the familiar acoustic of the Bergen Hall, especially in the 5.0 multichannel mix.

Chandos, most helpfully, provide the full texts and translations of all fourteen songs in the liner notes, something that is not always the case with releases from other companies.

This SACD will be a mandatory purchase for all who love the music of Sibelius as well as the countless admirers of the magnificent voice and exceptional musicianship of Gerald Finley and as such it fully deserves the highest possible recommendation.

An excellent recording. Gerald Finley does not disappoint with a typical polished performance aided by superbly paced accompaniment. There is a more crisper and deliberate edge to the Bergen Philharmonic under Edward Gardner who allows time for fuller expression, which works particularly well with Sibelius. Opus 49 is particularly pleasing and is probably a new first choice on SACD for this orchestral piece. Thoroughly recommended. Now all we need is for Chandos to up their game and record at a higher sample rate, 96/24 is beginning to show its age when others who record in PCM have switched to 192/24 and DXD

I completely agree with you, hiredfox. Perhaps surprisingly, I particularly enjoyed to listen to the Romance in C major, Op. 42: it's beautifully prepared interpretation which shows how touching this short piece really is in its typically Sibelian harmonies. Chandos has plans to record more Sibelius in the years to come so I'm eagerly looking forward what we will receive.

However, concerning to the sample rate (24/96), this matter does not only refer to Chandos but it's also a thing that BIS should update in the future. However, I'm believing both labels will do something to this because sooner or later overgrown rivalry on the sound quality will force them to proceed in a different way. Who knows, perhaps BIS will release a single SACD recorded in DXD just to test how it will be received among the consumers? I'm not saying everything what they have done so far would have been disappointments but there REALLY IS a noticeable difference between DXD and 24/96 unlike Bissie tries to insist something else.

I love this disc too, but I'm going to pretend I didn't see the rest of these comments except to say that you can compare the Nielsen cycles from DACAPO and BIS, one almost completely dxd the other 24/96 and the latter wins hands down on sound despite the potential superiority of dxd (and I agree, all other things equal it's better). Why? Because despite various attempts to fix it Philharmonic/Avery Fisher/David Geffen Hall is a lousy venue and has been from the day it opened in 1962. Robert has said it often: the venue is the single greatest contributor to the quality of the recording.