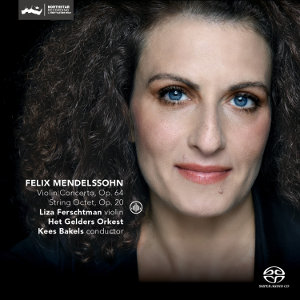 
Liza Ferschtman: "…slowly, as my musical path kept unfolding, I got to the point where more and more I was able to let go of my preconceived notions about the Violin Concerto and more clearly start to see and hear my own voice in it. Over the years I got to know so much more music by Mendelssohn, from the inside out, and I felt the language become more fully my own. When working with Kees Bakels on it a couple of years ago things started to really fall into place, and last May when performing it with the Arnhem Philharmonic I really was all of a sudden struck by a distinct feeling that I can only describe as falling in love all over again with this magical piece. Certain details in the score seemed to appear completely new to me and the idea of approaching the work with the same collaborative energy as in chamber music made me experience it completely afresh. The combination of passion, grand emotions and at the same time lightness and elegance, such characteristic traits for Mendelssohn, fell completely into place. To feel this way about such a familiar piece was revelatory and I knew I wanted to share these discoveries, if you like, with many more people."

There is no shortage of Mendelssohn’s ever so popular violin concerto Op. 64. The total Hi-res count now stands at 23 (doubles, remastered and Blu-Ray included). No easy choice, therefore, though a first selection can be made by choosing between stereo/multi-channel; remastered old heroes or recent DSD. Collectors have their own specific demands and know what they want. But even in the newer versions, there still is a wide selection available, of which Liza Ferschtman on Challenge Classics is the latest.

Difficult to advise as many have their strengths and their weaknesses. Reviews will help and let me just say that this one is at least as good as any other recent release. We know Liza Ferschtman from her Beethoven for the same label and also that she is an outstanding fiddler. Furthermore that the sound of this recording is ‘A-plus’ and that the provincial orchestra under the experienced Dutch Maestro, Kees Bakels, certainly does an amazing job. [Maybe not so surprisingly, recalling the recording of Mahler’s ‘Das Lied von der Erde’ Exton made some nine years ago with the same ‘Het Gelders Orkest’ (The Arnhem Philharmonic) under the baton of the Austrian Chef, Martin Sieghart, with the Dutch Mezzo-Soprano Christiane Stotijn and her American colleague, tenor Donald Litaker, which has ever since been a top choice of mine].

As you might have guessed, I will not dwell for too long on this concerto, other than to underline Ferschtman’s intuitive and emotionally reflective playing, supported by an alert orchestra, the more so as, in my view, the real boon here is Mendelssohn’s String Octet Op. 20. Even if you have already other ones, you should still take time to listen to this one and make room for it on your shelves.

In 2007 Liza Ferschtman succeeded Janine Jansen as Artistic Director of the Delft Chamber Music Festival, one of the more prominent festivals in the Netherlands and equally well known outside its borders. And yes, the Octet was recorded live in the ‘Prinsenkelder’, of the ‘Museum Prinsenhof’, Delft, by Liza Ferschtman and friends.

Headphone listeners may perhaps complain about noises and the ‘anti-clappers’, will probably not like the applause at the end. And whilst I believe that it adds to the live experience, I think that it is a small sacrifice for a superb rendition of this intellectual masterpiece of a 16 years young and vigorous Mendelssohn.

I don’t have the Mandelring (plus Quartetto di Cremona) on Audite, nor the rendition of the Members of the Australian Chamber Orchestra (BIS), so I cannot compare, but in comparison with the recording of the Prazak/Kocian Quartets on Praga Digitals, Ferschtman c.s. outshine their performance in almost all departments. That doesn't mean that their (Praga Digitals) performance is bad. Not at all! It simply means that Liza and Friends are better, and the recording, too. Even my long-time favourite: L’Archibudelli & Smithonian Chamber Players on Stradivari instruments of the Smithonian Institution in Washington DC (Sony SK 48 307) had to give way, also and mainly, I may add, because of the difference in recorded sound.

Mendelssohn always insisted that his Octet be played as though it was a Symphony and that the ‘fortes’ and ‘pianos’ had to be “more distinctly emphasized than it is normally the case with pieces of this genre”. He obviously wanted to avoid that the octet were to be seen and played as a mere ‘salon’ piece.

There is no such mention on the cover because not all were present, but 3 of the friends are members of the ‘Belcea Quartet’, currently considered to be one of the very best in its genre: Corina Belcea (violin), Krzysztof Chorzelski (viola) and Antoine Lederlin (cello). The other four are of equal stature in their own right: Zorman (violin), Joint winner of the 2011 Tchaikovsky Competition, Elina Vähälä (violin), a much sought after soloist, Desmons (viola), since 2010 principal viola with the Orchestre Philharmonique de Radio-France, and Klinger (cello), now a professor at the ‘Hochschule für Musik und Theater, Hamburg’ (Music and Theatre Academy, Hamburg, Germany).

So, here we are, all elements are in place, the venue, the music, the players and, last but not least, the recording team. Sit back and listen. Turn the volume somewhat higher than usual. Depending on your system, the quality of the recording can handle it. For reproducing the unadulterated emotional thrill of the performance it is important that the dynamics of the system match those of real life, thus rendering to the fullest extent the ‘fortes’ and ‘pianos’, like Mendelssohn had wished (and hoped) for.

I will refrain from jubilating about the technical skills of the players: It is self-evident and need not be overemphasized at the risk of losing credibility of judgement. What I do want to stress, however, is the musical insight and the sensitivity of each of them, as well as the agility and fervour of their playing, which is so much more in evidence during a live concert session than in an often over repeated rendition in a neutral recording venue.

Enjoy the vigour and precision of the attacks of the violins, the resounding mellowness of the violas, the stringed vibrancy of both celli; all made possible thanks to the high standard of recording. From beginning to end, with the singing melancholy of the Andante, the lighthearted dancing of the Scherzo to the forward urging force of the Presto, musicality is on display in generous measure.

I’m sure the recording team has done its best to minimize most noises, but isn’t it a small price to pay for the excellence and a joyful account of Mendelssohn’s Octet we are allowed to share in the intimacy of the Van der Mandele Hall? And does the final applause not rightly mark respect and esteem of an obviously more than enthusiast audience?

This is not a ‘salon’ performance, it is music-making of the highest order. It’s unreservedly irresistible!