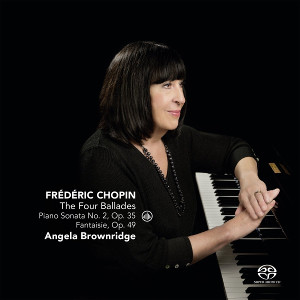 
'Today it is difficult to appreciate the impact Chopin’s music had on his first listeners. His mix of Slavonic passion and Gallic precision (his father was of French ancestry) created a world of such imaginative daring that it left his audiences bewitched, bothered and bewildered. Enigmatic to the last Chopin held aloof from such comments and left the more fancifully inclined to draw their own subjective conclusions.

Like Faure after him, Chopin disdained his published tempting tell-tale additions. More pragmatically, Piano Sonata No.2 is Chopin’s darkest, large-scale masterpiece, ranking among the composer’s supreme creations. Remarkably you are left with a work of an astonishing, if wholly novel coherence. The shock of the new continues with the Four Ballades. Finally, the F minor Fantaisie.

I should add that Chopin’s stature is sometimes questioned by those who claim he composed no operas, symphonies or oratorios. But the answer by this ‘dreamer in strange places’ is that he wrote all of these, but for the piano. As he himself put it, ‘the piano is my solid ground, on that I stand the strongest.’ - Bryce Morrison

Concluding my review for Takako Takahashi (Chopin: 4 Ballades, 4 Scherzos - Takahashi) I said: “At the end of the day, and all things considered, I believe there is still room for an additional release in DSD Multi-Channel at a ‘normal’ price from one of the well-known European quality labels to compete with the best”.

We are now being served. Thanks to Challenge Classics we get with Angela Brownridge, who blossomed so remarkably well with three Beethoven Sonatas in her previous release for this label (Beethoven: Piano Sonatas 3, 23 & 30 - Brownridge), a chance to acquire Chopin’s 4 Ballads in optima forma at reasonable cost, plus his second Piano Sonata, and the brilliant ‘Fantaisie’ Opus 49 as top bonuses. In short: an anthology of core repertoire of Chopin’s artistic output, deserving a substantial review.

Sonata No. 2 is not only his best known, but it is also his most emotionally profound creation, which, at the time, hardly any of his colleagues liked because of its revolutionary character in terms of its lopsided sonata form, and possibly also because Chopin had established his fame on the shorter, pianistically outstanding marvels like Waltzes, Preludes, Mazurkas etc.

Chopin never said much about the why and the how of this sonata and some have rightly or wrongly drawn a parallel with the November revolution is his Fatherland. Fact is that it has been composed in stages and that its famous third movement ‘Marche Funèbre’ was, indeed, written on the 28th of November 1838, on the eve of the anniversary of the 1830 Polish Uprising.

I belong to those who believe that it has largely to do with personal despair and anxiety about life & death. The remaining parts of what ultimately was to become his second sonata were written a year later upon Chopin’s hastily return to France from George Sand’s summer residence in Palma de Mallorca, due to a severe deterioration of his health. In his struggle for recovery good and bad moments were fighting for dominance and Chopin would lock himself up, spending days on writing and rewriting one page. Not revolution but prophesies of doom were competing with moments of beauty whenever he felt well. This is the background against which any performance of this sonata ought to be judged.

Several scores exist and its first movement has disputed repeats which some respect. Brownridge opts for the short version, like her illustrious predecessors: Cortot, Rubinstein, Horowitz and Gilels. Others, like Kempf, Pollini and Michelangeli, preferred the longer one. Whatever the personal choice, Brownridge very well holds her own in this exclusive field. Perhaps not so much in terms of technique, but, more importantly, in terms of emotional depth and personality. She addresses the irrational and dramatical darkness of the sonata in a perfectly and well-judged contrasting manner with its moments of poetical melancholia and forceful attacks. She turns the Scherzo into a real and almost agonizing fight between demons and reason, as though she feels the pain of a tormented and despairing Chopin with no other defence than giving in. The following ‘Marcia Funebre’ may be faster than generally played, but does not create any impression of her being in a hurry; the solemn character remains in full evidence. The subsequent ‘whirl’ in the short, final movement - one of the mysteries of this sonata - airs the final breath of life.

This tribute paid, for many the focus will be on the four Ballades. There is no shortage of options in high resolution. The present count stands on more than eighteen. However, the choice gets smaller taking into account financial limits of the average collector. I know, for the real thing this may be a silly argument, but it’s realistic all the same. That’s why I think that it gives all the more reason to welcome this new release.

Chopin is the inventor of the ballad. It’s a poem and should be treated as such. The most striking feature is that it allows the interpreter to present a personalized view with a wealth of colours and shades. None of the versions with which I compared (5) follow the same pattern. Chopin, too, did not always play them in the same fashion; all depending on his mood of the moment. It makes any comparison difficult and any opinion hazardously subjective. I’ve set Angela Brownridge’s reading next to the one of Kotaro Fukuma (Chopin: 4 Ballades - Fukuma), whose rendition I welcomed some time ago for his fabulous technique and magical ‘dolces’.

But technique is not everything. The four different ballades are all difficult, both musicality and technicality, and each in its own peculiar way. It mirrors Chopin’s emotional life: From sweet lyrical to impulsive fury. Fukuma may be marginally superior as far as technique is concerned, I find Brownrigde’s story telling more gripping: While Fukuma’s performance is spotless, Angela’s is catchingly spontaneous with a well-developed sense of coherence and expression, letting the listener share in what she sees and feels. A true artist.

Masterly though her ballads are, Brownridge saved her very best for the conclusion of this in every aspect remarkable recital. The Fantasy gets a rendition as only pianists of the top echelon can deliver; 12 Minutes of sheer perfection!

Angela Brownridge leaves me with the extraordinary impression of being more than one pianist. She kind of approaches the music in variable fashions. She adores Martha Argerich and Vlado Perlemutter; both at the opposite side of the scale. And such preferences show, or rather transmit, in the way she plays. She can be as fierce as Argerich and as poetic as Perlemutter. Commanding the ability to change, like an artful chameleon, it is difficult to put a ‘type’ label on her. And that, I think, is her greatest strength. She is not a piano acrobat, nor is she trying to dramatize; she is her own, with an incomparable personality, and those who are fortunate enough to appreciate that will find here much to enjoy.