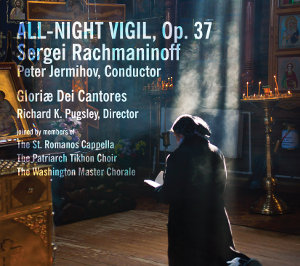 
Gloriae Dei Cantores releases All-Night Vigil, Op. 37 by Sergei Rachmaninoff, conducted by Peter Jermihov (internationally recognized specialist in Russian and Orthodox Liturgical music). Rachmaninoff's All Night Vigil is made up of texts taken from the Russian Orthodox All-night vigil ceremony. Critics praised the work as Rachmaninoff's finest achievement and "the greatest musical achievement of the Russian Orthodox Church." It was also one of the composer's favorite compositions, and the fifth movement was sung at his funeral. Gloriae Dei Cantores is joined by members of the St. Romanos Cappella, The Patriarch Tikhon Choir, and The Washington Master Chorale. Protodeacon under the First Hierarch of the Russian Orthodox Church, Vadim Gan, sings the clergy exclamations as well as Dmitry Ivanchenko. Soloists, Dmitry Ivanchenko and Mariya Berezovska, from the National Opera of Ukraine in Kiev, join the choir of 77 singers for this landmark collaboration and recording.

'Gloriæ Dei Cantores' is one of North America's finest non-professional choirs, and it published its first SACD in 2009. That disc contained a selection of five excerpts from Rachmaninoff's All Night Vigil Op. 17. In my review, I noted that "the 40 voices of Gloriæ Dei Cantores make a very good imitation of that special sound of Orthodox choirs, with great intensity of tone colour and vibrant emotional expression". Part of that intensity and emotion surely comes from the religious sincerity of this choir's members, who imbue soul to their singing.

Significantly, Rachmaninoff composed and performed his All Night Vigil immediately after the end of the First World War, in Moscow on March 10, 1915, by the all-male Moscow Synodal Choir. For the anniversary of this occasion, in 2014, Richard K. Pugsley (Producer and Director of the GloriæDei Cantores choir) and conductor Peter Jermihov (international specialist in Russian and Orthodox liturgical music) began studying and preparing extensively to record this masterpiece anew. It has resulted in this present issue by Paraclete Recording, which outgoes most of the current set of the SACD All Night Vigil albums in a number of ways.

First, there is an expansion of Gloriæ Dei Cantores, from 40 to a total of 77 singers. Jermihov and Pugsley selected singers with the highest experience of Orthodox liturgy from three appropriate organisations in America: The St. Romanos Cappella, The Patriarch Tikhon Choir, and the Washington Master Chorale. If you are interested, you can find a choir name list on the back page of the booklet, notated with 3 letters if they are visitors (SRC ,PTC & WMC).

Second, while in most SACD productions of the All Night Vigil, the solo parts were selected from members of the chorus. In this SACD, Jermihov invited soloists Dmitry Ivanchenko (tenor) of the National Opera of Ukraine in Kiev, Mariya Berezovska (mezzo-soprano), also with the National Opera of Ukraine, and Vadim Gan (bass), protodeacon under the First Hierarch of the Russion Orthodox Church at the Synod of Bishops' Cathedral in New York. He sings the clergy's chants, sometimes with Ivanchenko.

Third, Rachmaninoff's score has many difficult requirements for voices, and in this expanded choir there are no less than 22 bass of which no less than seven are octavists (or basso profundos). Rachmaninov uses a difficult lower note (B flat 2, below C two octaves below middle C) in the 'Nunc dimittis' which is reached by the basses by going slowly down the scale, at the same time making a diminuendo to a mere whisper. This, and other bass parts by Rachmaninov in this Vigil require bass voices of rare quality and intensive training. Listening and thrilling to the bass parts on this disc confirms them to have this.

Fourth, Information. The disc comes with a 52 page coloured booklet (although lacking in page numbers). Part 1 is a dissertation by the conductor, Peter Jermihov, Russian roots but American. He begins with the Context of the Rachmaninoff All Night Vigil, moving on to The Music, where he shows how the piece was built and how complex it could be, and he ends with reasons for searching special musicians to take part in this 100 year tribute to Rachmaninnoff (The Performance Vision). Part 3 contains the texts, arranged page by page with Cyrilic, transliteration and English paralleled. Jermihov begins each track with a brief but informative note about its meaning or origin. Colour photographs, mostly of the church venue, illustrate these pages. Part 4 has biographic notes about conductor, organiser and soloists.

Such a superlative performance requires an equally brilliant recording. In charge of this is Keith O. Johnson, Reference Recordings, a very well-known Technical Director, for recording and mastering. The first thing to do is find a venue. An Orthodox Church, which architecturally contains a host of niches and side areas with high domed spaces, is also decorated with textiles, gold-laden art and wooden casing, all of which produce a large, lively and complex reverberation.The choral sound made in Orthodox churches is thus distinctive, and Johnson's chosen venue was The Church of the Transfiguration, Orleans, MA which meets these criteria. He thus had found an ideal place for the Vigil recording.

Listening to the 5.1 tracks, with the volume on my system louder than usual, I was thrilled about their clarity, transparency and wide dynamics, aided by capturing at a hi-res-PCM rate. The disposal of tenors, bass and soloists towards the front of the sound stage, and the sopranos and altos from the rear forwards, adds extra realism, for example when the high voices exchange lines with the low singers. The sheer beauty of this set-up is breathtaking, you feel surrounded by the glory of the chorus. Switching to Stereo, the 3-D sound collapsed somewhat, despite the presence of HDCD, but the ample acoustics of the reassembled voices, as it were, helped to rescue most of the marvels of the recording, but in 2D.

One could take more time and do things, like comparing timing other All-Night Vigil SACDs with the new Gloriæ Dei Cantores one. But I have no doubt in saying that this performance and recording makes a landslide of emotions in this favourite composition of Rachmaninoff's. Even if you have a collection of Vigil SACDs already, as I do, you will find that this one will come out of your storage first. Somehow, this music inspires and takes us through our life into a life of sheer beauty for 66 minutes and 4 seconds, Christian or Atheist.