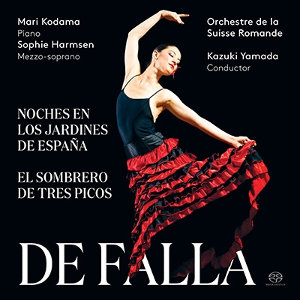 Elsewhere with the sensational ballet El sombrero de tres picos, Falla conjures up music steeped in Andalusian culture which is boisterous, full-bloodied, and urgent. It’s impossible not to be swept along by the drama in this orchestral showpiece. By turns lyrical, sensuous, or dramatic, the meticulously written score is full of surprises and the work positively bristles with wit, energy and exuberant intensity.

Yamada’s previous recordings with the OSR for PENTATONE have been widely praised – “Exquisite and passionate … grace abounds” (BBC Music Magazine), “tastefully refined” (Gramophone). For their more recent release of music by Roussel, Debussy and Poulenc, HRAudio.net noted Yamada’s “exuberant performance” and the OSR “playing …[with] tremendous vitality and enthusiasm, as if their very lives depended on it.”

The pianist Mari Kodama has established an international reputation for profound musicality and articulate virtuosity and has recorded extensively for PENTATONE. Her most recent release with her sister Momo Kodama, a sizzling account of Tchaikovsky ballets, was praised by The Guardian for its “sparkle and style” and described by Artamag as “…a very exciting recording, a ‘labour of love’ by two extraordinary pianists.”
Frequently in demand as an interpreter of Mozart’s works, the mezzo soprano Sophie Harmsen is a regular performer in large international festivals.

A Swiss orchestra, with a Japanese Chef, together with an American pianist of Japanese origin and a Dutch singer playing undiluted Spanish music. An interesting combination. Will it work? In most, if not all existing recordings at least one participant is Spanish or Latin American. Harmonia Mundi does best, having recorded two of the works on this disc with a one hundred percent Spanish cast: Falla: El sombrero de tres picos - Pons, and to wide acclaim. I do not have it and can, therefore, not compare. And those who would like to find out would have to fork out a hefty amount of money for the Super Audio version. So, in that sense it’s good to have a new release in high resolution which, on top of that, has been recorded by the experts of Polyhymnia. That’s already half the battle in the bag.

In the ‘Nights in the Gardens of Spain', Mari Kodama’s contribution is one of sparkle and shine. Where in other recordings the piano remains part of the orchestral fabric, Kodama has been given a more prominent position. Purist may question such a decision. De Falla had at first a piano concerto in mind, but after some further restructuring, it looked more like a symphonic poem and in fine he decided to have it published with the sub title ‘Symphonic Impressions’. Maybe not entirely correct, I do think that the choice is a good one. The piano part is, indeed, sufficiently special to lift it out. As for the orchestral cadre, Kazuki Yamada ensures, with a sometimes dark brooding ‘palette' and sensuous tone, a refined accompaniment, against which Kodama gets ample room to fill in the virtuoso potential, especially in the final and most impressive movement ‘En los jardines de la Sierra Córdoba’. For Spanish music there needs to be a kind of sweltering atmosphere. Yamada c.s. come close.

So far so good. In the following two suites drawn from the ballet ‘El sombrero de tres picos’- the main item on this disc - the farcical pantomime of The Magistrate and the Miller's Wife comes to life in a mix of tenderness and action. This is all familiar stuff. And the Introduction does include the castanets and the simulated feet tapping. Yamada directs with precision, but perhaps a shade too cultivated. For my taste it could have been played with a bit more peasant humour and a fair dose of uncomplicated, stirring ‘bite’, in the style of traditional Andalusian folk music. The contribution of the soloist is limited. When I think of a non-Spanish singer doing this, I think of someone like Grace Bumbry, with her rich hot-blooded voice, who recorded it many years ago for DGG, together with Lorin Maazel and the Berlin Radio Symphony. Beautiful though Sophie Harmsen’s mezzo is, she does not carry the same weight.

It’s unfortunate that in an apparent effort to record an as broad a sample of De Falla’s oeuvre, so little room has been given to ‘El amor brujo’, of which only the ever so popular ‘Ritual Fire Dance’ figures in the programme. It would have allowed for a more careful and considered judgement of Ms. Harmsen’s pleasantly articulated voice than the (very) short interventions in track 4 and 9 of The Tree-Cornered Hat. Dropping the Interlude and Dance of La vida breve, combined with the space left would have given the possibility to include one or two sung parts of ‘The Bewitched Love’.

In spite of some minor quibbles, there is much to enjoy. The playing is perfect; Kodama gives her best and Yamada has a good and inspiring grip on the orchestra. Whoever likes it with more melody than emotional, Spanish passion, will find this a more than welcome addition to the Hi-res catalogue. And for sure: All the popular tunes are played with the required panache.

"Cultivated." Exactly what I thought. Not a problem in the Jardin's, but I found my mind wandering throughout the rest of the selections. Has Ritual Fire Dance ever sounded more banal? I'm sticking with Ansermet's Reel to Reel DSD transfer from HDTT. More lively and immediate. I also cherish the long-gone Suisse Romande corporate sounds.

Are you, as far as the Ritual Fire Dance is concerned, referring to Ansermet’s famous 1955 mono recording?

My apologies, I was referring to Ansermet's Three-Cornered Hat.

I was interested in your comments about wandering minds during playback of parts of this disc. Unlikely as it may seem at first reading that this has anything to do with performance, it is co-incidentally one of the criteria that (I have realised) helps me determine performance both on disc and at live concerts. It is involuntary and unpredictable but repeatable (on disc) in my experience. No, it is not April 1st!

The combination of the OSR and Yamada is proving irresistible and this new recording is sumptuous, full of vitality and energy as these works deserve.

Pentatone have once again excelled with a hugely atmospheric recording of very generous proportions and I see nothing to complain about in the inclusion of such brief excerpts of other works. View them as encores to very fine performances as you might expect at any live concert.

Not perfect of course, a few moment's of hesitation here and there; some minor pacing issues in sections but on the whole a worthy addition to any collection. 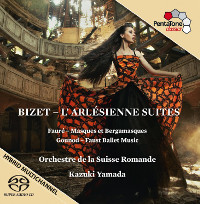 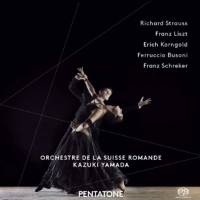 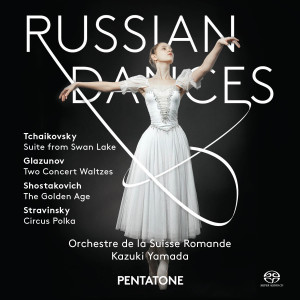 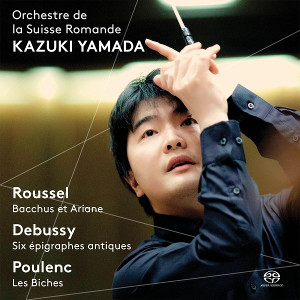