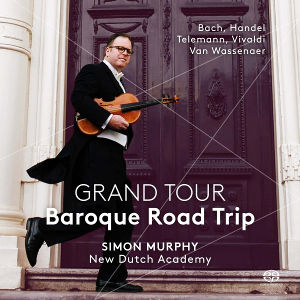 
From London to Venice via Leipzig and The Hague, with Grand Tour – Baroque Road Trip, Simon Murphy and the New Dutch Academy take a fascinating journey through Europe in a sumptuous programme of Baroque musical treasures. Using authentic instruments in an immersive acoustic, these vivid performances not only celebrate the glories of the Baroque but also the sheer joy of making music.

"We've aimed to create a musical experience where you can really feel the human physicality involved”, writes Simon Murphy, “from the refined, elegant and poised end of the spectrum, right through to the earthy and raw, textured and gritty, sometimes rustic aspects of this Baroque craft of music making.”

In the two irresistible concertos by Vivaldi – the famous Concerto for Lute, Strings and Basso Continuo in D and the infectiously bubbly Concerto for Flautino, Strings and Basso Continuo in C – the outer movements radiate a sunny optimism, balancing slow movements of great tenderness and beauty. Noted for its somewhat unusual scoring, the rhythmic bounce and swing of Bach’s delightful Brandenburg Concerto no. 6 in B flat is given here an extra fillip with the addition of a lute to the basso continuo. The delicious interplay between the ensemble parts continues with van Wassenaer’s characterful Concerto Armonico no. 1 in G which Murphy notes “could be nicknamed the ‘Dutch Brandenburg 3’”. And in his operas, Handel never really strays far from Italy, demonstrated here with the delicious arias Tornami a vagheggiar (from Alcina) and Brilla nell'alma (from Alessandro).

Described by De Volkskrant as “a musician with guts: a conductor with the passion and conviction of a born missionary”, Simon Murphy has a reputation for bringing fresh perspectives to the classic symphonic repertoire and is the founder and artistic director of the award-winning New Dutch Academy. This Baroque orchestra was described by BBC Music Magazine as “a big band playing on period instruments” and praised for its “sumptuous ... swinging rhythms ... stylish ornamentation ... inventive extemporisation.”

“This album takes its inspiration from the sheer delight and excitement of 18th century musical travellers”, writes Simon Murphy in the album notes, “there is such a palpable excitement as they embark on their musical adventure … I hope you enjoy the album and feel inspired by it.”

This is Simon Murphy and the New Dutch Academy’s sixth release for PENTATONE.