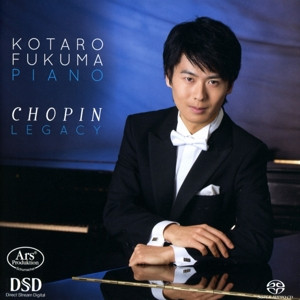 Over a year ago I reviewed Kotaro Fukuma’s recording of Chopin’s four ballads released on Denon: Chopin: Ballades - Fukuma. I was impressed by his technique and ‘feeling’ for Chopin in its various moods. Now he is back with another Chopin recording, this time for the German label ARS-Produktion.

From my previous review I may recall that “Fukuma impresses with -time and again- building up tension and changing forward thrust very naturally into tender feelings. One might say that his ‘dolce’ is feminine and his ‘forte’ masculine”. Both apply equally to the Sonata and the Preludes, but this time in reversed order.

In a personal note Fukuma explains how the Preludes and the Sonata, plus the two intermission pieces (Berceuse and Contredanse), symbolize ‘two life cycles’ of Chopin, where the Berceuse belongs to the first, ‘the ascent to heaven’ and where the Contredanse or country-dance (the origin of which is till this very day still not entirely clear) serves as an entry to the second cycle, during which, Fukuma says, ‘it seemed almost incomprehensible that Chopin was able to write rich, dramatic works of this magnitude during periods of immense suffering’. The fact that I, and possibly others, do not fully perceive the spiritual tenor of the concept does in no way hamper my spiritual involvement when listening to the cultivated yet gripping execution of both cycles by Fukuma.

Some critics have it that Chopin’s intellectual output did not evolve during his life time, as though this has to be taken as a serious shortcoming. Down to earth lovers of this giant of piano literature could and most probably would refute such ideas with the simple notion of ‘never change a winning team’, regretting that he didn’t live longer to produce more of that wonderful same.

Chopin was, admittedly, not an innovator in terms of a ‘continuing exploration of new and untrodden avenues’. But one could, on the other hand, very well argue that his unrivalled contribution to piano literature was in itself already a major innovation. Seen in that light much of what he touched was, in those days, innovative. Like inventing Mazurkas and Ballads and developing his markedly new finger work and pedal technique, for ‘easy’ execution.

One of these innovations pertain to his Preludes, regarded by many as his most impressive and significant composition. The 24 preludes cover all the major and minor keys, like did J.S. Bach, but in a totally different and innovating concept. For details I gladly refer to the liner notes. Suffice it to say that the preludes were not meant as an introduction to something. They were written for stand-alone use, albeit in groups of cyclical cohesion. They obviously require a skilled and multi-facetted pianist. Not just technically, but someone being able to flawlessly encompass the ever changing moods from virtuoso to robust and from melancholy to loving tenderness.

This is clearly a territory where Kotaro Fukuma feels at home. There are of course more who can play them, and play them well, but only few who are able to combine all these inherent musical expressions to the same degree as Fukuma does. Helped by his sublime technique, he can devote all his inspiration to refining the various hills and valleys, shades and colours, and all that the preludes ask for setting down an exemplary reading.

Comparing the interpretation of my all-time favourite, Nicolai Lugansky (Erato RBCD), who so easily commands all the technical requirements, and this ‘new guy on the block’, differences turned out to be much smaller than I anticipated. Technically largely at par, I’d say that what Fukuma lacks in articulated power he wins on tenderness and feeling. Fukuma not only understands the language, he speaks it amazingly well, too.

Turning to the other major work, it looks as though his choice for putting on record Chopin’s Sonata No. 3 was not without implicit symbolism. From what I’ve learned, he, the interpreter, and Chopin, the composer, having the same age of 34, a spiritual bond could thus spiritually be forged for a devotional complicity, allowing Fukuma, as it were, to creep under Chopin’s skin. People may laugh at such things, but I believe it does give true artists extra impetus for a well-considered performance in the spirit of the master's mind.

For comparison I took out the set of sonatas by his fellow country-woman, Masako Ezaki, who recorded all three in high resolution for the Japanese label Triton: Chopin: 3 Sonatas - Ezaki, as well as (one of) the legendary recording(s) by Maurizio Pollini (DGG 1986 RBCD). Both participated, on different occasions, in the Chopin contest in Warsaw. Pollini amongst the Laureates, Ezaki leaving in the second round, which, by the way, doesn’t necessarily mean that Ezaki hasn’t a ‘feel’ for Polish music and culture, because, unlike Pollini, she has lived for some seven years in Warsaw and is married to a Polish national.

So, what about Pollini? He has the advantage of being a prizewinner and a famously respected pianist. And whilst he plays with phenomenal technique and great authority, he has the disadvantage of having been recorded in a bygone era with dated Sonics. Ezaki’s interpretation is more sensitive and recorded with a beautifully sonorous piano tone, but I find her playing kind of ‘matter of fact’. It’s difficult to pin it down, it is certainly not boring, but after a while one loses contact with her; the charming appeal is gone. With Fukuma it’s the other way around. He searches the highs and the lows, uncovering on his way the deeper substance of each movement, keeping the listener spell-bound from start to finish with a passionately entrancing tone, a firmly articulated expression as well as the right dosage of virtuosity and sensitivity, without losing himself in the complexity of the overall structure.

One sometimes wonders why so few soloists from the Asia figure high on the list of celebrities of ‘Western Music’. In another review I suggested that there is a widely pre-conceived idea that “many East-Asian pianists are magicians with elastic fingers and a supra natural technique, but lacking artistic talent and are short on spiritual content”. But also that “nothing is farther from the truth. Why? Look at the prizes having been awarded to Japanese, Korean and Chinese pianists at such important international contests as the ‘Chopin Piano Competition’ in Warsaw and the ‘Concours Reine Elizabeth’ in Brussels”. Kotaro Fukuma is another outstanding example. And although not having won any of these distinguished prizes (for the simple reason that he never participated in these contests), I have no hesitation to rank him amongst those of the younger generation to be seriously reckoned with.

Do try it out. With a sound quality so much better than the previous Denon recording, you will acquire more than 75 minutes of compassionate playing and intense joy.