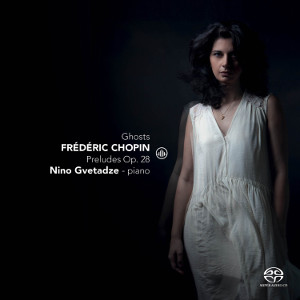 
"Chopin looked back and evoked for us the story of his life in his 24 Preludes. Through the medium of these works, he revealed his deepest fears and sorrows, but also the beauty and integrity of his heart. The story of these ghosts culminates in tolling bells which are, in Cortot’s words, “Of blood, of earthly pleasure, of death...” But what follows? A pause: silence, timeless solitude, in the Etude Op.10, No.6. Then, suddenly, the soul wakes up and waltzes into space. The album ends with the Scherzo No.2, “like a charnel house”, or house of the dead, as Chopin apparently described the opening – yet the finale sounds like a celebration of life. And so our ghostly journey ends with fireworks, with smiling and shining, looking far into the future..."

Hardly a month goes by without a new talent boiling to the surface. And when I say new, I mean someone who does not yet belong the Great Names. Nino Gvetadze is such an artist. She’s new to the Hi-Res catalogue. That is not to say that her name doesn’t ring any bell. She’s a much appreciated pianist in Amsterdam, where she settled after having left her home turf, Georgia. And she’s been traveling around, too, giving concerts and recitals, including one in the Wigmore Hall, London, which is indisputably a cherished cradle for all that’s young and coming. How I know? It’s in the artist’s biography in the booklet. These and other information does, indeed, shed interesting light on the person in question, and I think that no one would want to be without it. But having listened to her personal views on Chopin’s 24 Preludes, many of the PR qualifications suddenly became immaterial. Why? Listening with an open mind and ditto ears is, after all, the best way for passing any judgement, and here is mine

There are other pianists, new as well as established, who can play the Preludes Op. 25 with great flair, exemplary technique and masterly sensitivity. And talking about new and coming: In another review (Chopin: 24 Preludes, Piano Sonata No. 3 - Fukuma) I raved about the young Japanese pianist, Kotaro Fukuma. In comparison he is faster than Gvetadze in practically all 24, albeit that differences in the slower ones are marginal. Indeed, Gvetadze takes her time. Not because she is technically the underlying artists (her ardent Presto con Fuoco in No. 16 proves it, and so does the closing Allegro Appassionato, no. 24), but because she devotes much time to unravel soul and spirit of each prelude. Then what is so special about Gvetadze? She does well, very well, in all the above named departments, but there’s something else that struck me. Her genius has a name: ‘magic’. True artists do more, much more than playing notes. They are creators of emotion and Gevadze’s playing is characterized by subtly holding back, skillfully applying accents, while keeping the flow going with all the shades and colours the music asks for. And, furthermore, she does it in a way that bewitches the audience, drawing the attention so compellingly all the way, from beginning to very end, into her musical world of make believe. Her reading is, more than anything else, Masterly and Suggestively Magical.

From a technical point of view the Preludes are not only a highlight in Chopin’s oeuvre, they are also considered to be fragments of his life, telling a story in 24 parts, and so does Gvetadze. True artists have a vision, too. Beethoven said that he saw ‘things’ when he played. Gvetadze speaks of ‘ghosts’ hidden in the Preludes -and I quote- ‘culminating in tolling bells which are, in Cortot’s words, “Of blood, of earthly pleasure, of death …”

Complementing her vision, Gevadze treats us with a follow-on programme putting first of all, so it seems, the ghosts back in the bottle with a marvelously sensitive played Etude Op. 10; letting us subsequently waltz into space (she says); to end her recital with Scherzo no. 2, starting ‘like a charnel house’, but developing it into a finale which “sounds like a celebration of life”. She concludes: “And so our ghostly journey ends with fireworks, with smiling and shining, looking far into the future”.

My conclusion: Nino Gevadze delivers what she says. This is a remarkable recital of ghosts and magic. As far as I’m concerned the ‘smiling and shining future’ should be hers’.

Did I say something about the recorded sound? I’ll do it here. Put the volume as loud as the system can handle and your neigbours will accept. You will be rewarded with a full and warm sounding concert grand in your private living/drawing/listening or whatever room. It will give you the same thrilling experience I had. No escape. It’s Magic.

BTW, the liner notes (Joanna Wyld) are excellent, but available in English only.

Intriguing review. Can anyone compare Gvetadze's recording to this other hi-res contender from Ingrid Fliter, Chopin: Preludes - Fliter?

I wouldn’t see them in terms of contenders. Both are totally different in their approach. It’s more a matter of choice. If you want technical perfection, then you may opt for Flitter (or Fukuma, for that matter, both have won a prize in a Chopin contest). Her playing is secure and cannot be faulted. But I find her a bit matter of fact and at times evens distant. Some soul & poetry is missing. Gvetadze is thoughtful; more focused on the content than the packaging, bringing in the typical Eastern-European mystical & wistful elements. If that appeals to you, she’s your girl. Mind you, nothing is more personal than ‘appreciation’. In terms of sound, Challenge Classics wins hands down.

Thanks, Adrian! That's very helpful. I've got the Fliter (as well as various performances on RBCD), so you've given me a rationale to buy the Gvetadze. It helps that no one beats Challenge for sonic excellence.

With Arrau, Fliter, and Schliessmann already in my library there wouldn't be much temptation were it not for Adrian's enthusiastic review, but that's enough for me. By the way Schliessmann hasn't gotten very positive attention here since a bit of ill-advised self promotion in the early days of the old site but several of his discs have been received with great acclaim by various American critics for Fanfare and ARG, and I'll put in a personal plug for him as well.

No shortage of competition for this disc and already several good accounts on SACD. Nino Gvetadze is a new name to me although she has played recital at the Wigmore Hall but there is so much going on in London theses days that it passed me by. Her survey is pleasant enough to listen to without ever reaching emotional heights or depths, quite spirited in parts but not earth shattering either. I'm not sure this sheds new insight on M Chopin's life journey.

Challenge as usual deliver a highly believable acoustic at just the right scale and the lady is seated with you in the room,

John, this is how Gvetadze sees it: https://www.youtube.com/watch?v=jeUXuG7FJDk
She clearly isn't after the technical bravura.