This is a disc I have repeatedly enjoyed and must count as one of the finest reissues that Dutton have given us.

The account of Petrouchka offers the original 1911 version as does Stravinsky: Le Sacre du printemps, Petrouchka - Litton. By contrast, the accounts of Stravinsky: Petrouchka, Rachmaninov: Symphonic Dances - Jansons, Stravinsky: L'oiseau de feu, Le Sacre du printemps, Petrouchka - Rattle, Stravinsky: Concertante music for piano & orchestra, Petrouchka - Bavouzet / Tortelier and Berliner Philharmoniker - The Asia Tour (2017) all offer the 1947 revision. Although the revisions are relatively slight in terms of the structure of the work, there are some clearly audible differences that Stravinsky made, with the use of offstage percussion being the most prominent "casualty" of the 1947 revision. The other changes Stravinsky made were to reduce the size of the wind and brass forces required, albeit compensated by fewer instruments needing to double up.

As the sleeve notes make clear, the accounts on this release were recorded on four single days, so approximating quasi "concert" performances (with an audience of 0!) and patching; all gain from a spontaneous feeling that is often lacking in studio accounts and do not have to negotiate the vexed questions of audience "contributions" (during or after each performance). The timings of all the accounts of Petrouchka listed above are remarkably consistent and Boulez proves as alive to the delightful inflections of colour as anyone. From a sonics perspective, the NYPO have a very different timbre from that of the Bergen PO, LSO and RCO; it's somewhat less rich in string tone that has been deployed in these accounts from up to half a century later. Fortunately the tapes have withstood the passage of time well, the only hint of age is the slightly "brittle" sounding upper treble but never discomfortingly so. In multichannel, the orchestra completely surrounds the listener - although a radical sound picture, the groupings of instruments are sensitively chosen both from the perspective of musical coherence and textual clarity. There are aspects of the score which are easier to hear in this account because of the careful choice of positioning than when given a "normal seat in the concert hall stalls"; some listeners may not appreciate such an approach but if one can accommodate more than a single account, it makes for a highly stimulating and enjoyable alternative to any of the fine alternatives listed above. Paul Jacobs is rightly listed as pianist and the likely orchestra members involved can be found at the NYPO's excellent digital archive (https://archives.nyphil.org/). As a minor technical point, Boulez's Petrouchka (like Litton's) is presented with one track for each of the Tableau; both Jansons and Rattle's LSO account use 15 tracks.

Next up on the disc is the Pulcinella Suite; Boulez would later go on to record the full score in Chicago (Stravinsky: Pulcinella - Chicago Symphony Orchestra). The suite has at least three fine alternative accounts (Stravinsky: Pulcinella Suite - Weilerstein, Stravinsky: Pulcinella Suite, Apollon musagète - Suzuki and Stravinsky: Apollon musagète, Pulcinella Suite - Janiczek). Perhaps unsurprisingly, given there are metronome markings in the score, Boulez's choice of tempi are very consistent over the 35 years between his two recordings and are also fairly similar to those of the alternative accounts listed. A couple of departures from agreement are in the Scherzo-Allegro-Andantino and Gavotta con due Varizioni movements which are both more moderately paced here but never to the point of feeling sluggish; some listeners may feel that the greater contrast offered here serves to better point up the difference with the neighbouring faster movements. The recording here is only four years the junior of Petrouchka but fares much better in terms of how the tapes have withstood the passage of time although is perhaps a little closely recorded. As with Petrouchka, the distribution of instruments is made thoughtfully.

The sound is remarkably good for the source materials age (1971 - 1975) although some of the upper treble does sound a little brittle at times but this is not consistent throughout the disc. To these ears, it does not significantly detract from the listening experience but one of the more recently recorded accounts listed above may be preferable if the sound quality is the main consideration. The balances are always good and reveal the details of the score well (credit on this part is of course also due to the musicians), especially when listening to the multichannel layer. As often with source material of this vintage, the dynamic range is less than it may have been had these accounts been recorded today. Musically, all the accounts are highly stimulating; for sonics, the Petrouchka arguably fares worst and the Symphonies of Wind Instruments the best (with the Scherzo Fantastique a close runner-up) - the rating is a weighted average.

I ordered this about a week ago, straight away after I saw a comment from Ubertrout. So kudos to him, and can't wait to get it which might be another week considering it's airmail from the UK. And I'm happy that it's been added to this sites database.

apart from the fact that it contains a few more works, and it's apparently multi-channel, I'm wondering whether the stereo layer is really an improvement on the DSD remastered Japanese disc that I have of this recording of Boulez's Petrushka. I'd love to read some comments on the sound quality of this Dutton disc

Is the Japanese disk an Sacd? I ask because I don't see it in the database and I could be wrong but I would bet that this Dutton release is cheaper than the Japanese release, plus you have all of the other goodies on here.

no, it's not on SACD. But Sony Japan remastered it in DSD (and then released it on redbook only). The sound is extraordinarily good, given that DSD remaster, but of course downsampled for CD, which is Japan-only (I bought it in Tokyo 7 years ago). Since this is an old analogue recording, I wonder how much more Dutton could get out of it for his SACD, apart of course from the fact that the SACD is multi-channel (so if that's your thing, this SACD is a no-brainer, as it is also rather cheap). My question purely relates to the stereo layer. I doubt that Dutton has done a better job than the Sony engineers, but the difference may of course lie in the downsampling. But I might test it myself, as the price of this SACD is right. (to be sure, I only talk about the Petrushka, which is coupled with the Sacre on the disc I refer to, so the additional works on this SACD are definitely a plus in favour of it)

I haven't heard many comments about the Dutton stereo layer, nor have I listened to it, but I wouldn't be surprised if it's quite good...Dutton is a fairly recent player in the SACD game, but Michael Dutton has been transferring older analogue recordings for decades on CD. As you've said it's pretty cheap - if this recording is important to you then it seems like an easy choice to try it out.

just ordered it. I'll report back when I have made a comparison with the Japanese remaster I mentioned

I am a fan of Dutton issues of older analogue material and have now got quite a few of these Columbia/CBS and RCA quad re-incarnations including this Stravinsky disc. The transfers are all extremely good. There is a marked difference in the way the original companies approached Quadraphonic sound. Some recordings are similar to the modern style of surround with the rear channels carrying mostly ambient sound. Others place the listener more or less where the conductor would be. Columbia also favoured close miking and spotlighting. This effect is enhanced with quad resulting in pin sharp focus. The Stravinsky is one of those with lots of action from behind. This may not be what we are used to hearing but it is exciting aurally. The Mahler disc has a diagram on the cover showing the sonic layout. The effect is much like that produced by Tacet. Don't forget that on SACD you get a standard stereo mix as well if the quad sound is not to your liking and the stereo mix is very good indeed and I would think very like the original. I have read some comments about companies putting money into modern recordings instead but some of these issues are top notch performances from conductors in the top flight - Boulez, Bernstein, Levine among others and in my opinion great to have them in my collection in the best available sound. Where else will you get the NY Philharmonic in top form on SACD let alone surround sound? The Bernstein Haydn is amazing. Maybe not the latest historically correct but Bernstein was the master of drama and there is plenty on show and very thrilling.
I really urge people to support this project. Just try one! This Stravinsky disc, for a number of reasons is a good place to start.
Could we not also have the EMI quads one day?

I received this disc a couple of days ago and haven't had the chance to hear it yet...I hope to have time this weekend.

Per Gilbert's comment above, this old Sony/Columbia SACD with Boulez and the NY Phil, Bartók: Concerto for Orchestra, The Miraculous Mandarin - Boulez was one of the earliest SACD's and the cover shows the placement of the Quad speakers and placing the listener in the center of the performance, however I believe it was remixed to 5.0 by Sony.

I'll add that you can count me as someone who likes the discrete multi-channel recordings, it certainly reminds me of being in my middle school band. And to echo Gilbert, it's interesting how in the 25 or 30 years between Quad and newer digital recording techniques that there was a rethinking about how to use the surround speakers.

I liked this very much. The Petrouchka recording uses surround channels in an ambient manner and the other recordings are certainly more discrete and the sound itself is very good and I am very happy to have this. 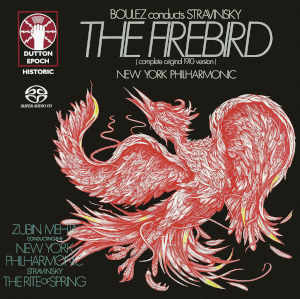 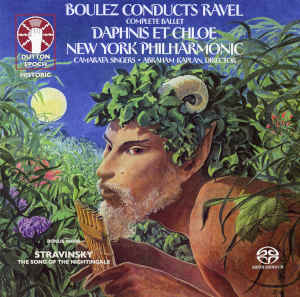