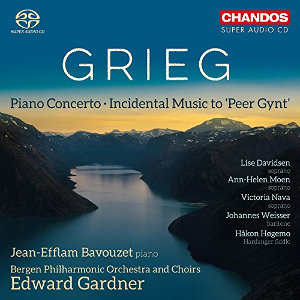 
This much awaited recording offers keenly idiomatic performances of the most famous works by Grieg, played by the composer’s own orchestra, the Bergen Philharmonic, and its Chief Conductor, Edward Gardner.

The drama and passion of such favourite pieces as the incidental music to Peer Gynt and the Piano Concerto are superbly captured in surround-sound with exemplary Chandos sound quality.

Unlike most existing recordings, offering only the orchestral suites, this disc presents numerous extra excerpts from Peer Gynt, which follow the sequence of Henrik Ibsen‘s dramatic poem, including sections for the unique Norwegian 'Hardanger Fiddle’.

Having collaborated with the orchestra on several occasions, Jean-Efflam Bavouzet is the soloist in the Piano Concerto, a piece that stands out as a shining example of a single great thought captured and expressed in music. The power of this conception is evident throughout the concerto in the pianist’s faithful, yet highly romantic interpretation.

Bringing together two of Grieg's most celebrated works with fine artists and recording team should be an obvious musical recipe for success.

The Peer Gynt (extended) excerpts are presented first, in the order in which the numbers appear to accompany the play. Over half the music is included when measured by playing time, with 3 out of 4 items of Act I being present, 3 from 6 in Act II, 1 from 2 (3) in Act III [the prelude is later repeated pianissimo as accompaniment to Åse's death so arguably only two numbers are supplied by Grieg here], 5 from 6 in Act IV and 3 from 5 in Act V. All the favourites from the two suites are included in Gardner's selection. In general, the playing is well up to the standards we have come to enjoy from Bergen Philharmonic Orchestra and, when allowed, the same appealing freshness that radiates from Ruud's account shines through with some very deft touches from the orchestra.

However, there are occasions when Gardner presses the material so much that the drama is forced out of the music. The most obvious example is, perhaps, Peer Gynt's Homecoming (Act V) where Gardner manages to shave an incredible 14 seconds off Ruud's already far-from-sluggish 2'23. Unlike the revelatory reassessments such radical approaches from the HIP movement have afforded us, the Bergen players are struggling to evoke the spirit of the music (as would anyone at such speeds) even though they audibly give their all. It is not just in the fastest music where this happens but some of the detail evoking birdsong is lost in the constant desire to move forwards. Perhaps a "less is more" approach would have been more beneficial to the music making. Other aspects that are less appealing here than in Ruud's complete set are that the singers, although very musical, are tonally less radient here. The orchestral timbre is also more blended under Gardner's baton; some listeners, for whom Karajan marks a high point in conducting, will be thrilled but others will prefer the wider palette that Ruud coaxes from the same orchestra.

The piano concerto is beset by similar issues of orchestral timbre. Where Ruud (and others) manage to have convincing orchestral tuttis without the timpani overly dominating the lower textures, this is unfortunately not the case in the combination of the engineers and Gardner's conducting. This account from Bavouzet is also markedly faster than Ogawa's with Ruud in the outer movements. This leads to the situation that, where one normally feels the spirit of Schumann's marvellous concerto being re-imagined by Grieg, Bazouvet clearly has other (later) composers in mind. Hugely impressive though that feat of playing is, the style employed just doesn't sit right with the music to these ears; it would be enormously successful in, say, Rachmaninov or Scharwenka or others of the late or neo Romantic eras.

Although the differences in timbre likely stem from the podium as much as the microphones suspended around it, it is noticeable that BIS get a more dynamic and nuanced soundstage even though the above installments of Ruud's cycle were taped over 10 years ago. The positioning of the singers and actors in Ruud's account of Peer Gynt in surround sound are also more adventurous and consequently engaging than here.

The sound Chandos serve up has congestion that was entirely absent in the earlier Bergen recordings; combined with the tendency to press the music beyond breaking point, this unfortunately can only be recommended to completist fans of Bavouzet or Gardner. Listeners are strongly recommended to investigate Ruud's cycle for Peer Gynt and one of the alternatives highlighted above.

Thanks for your very honest appraisal of this disc. Like most on here there is no shortage of performances of these works in our collection so it was only the completist tendency in me that focused interest. One less on my wish list.

I had "pre-ordered" this and obviously wasn't thrilled to see John's negative review. I've lived with the disc for about a week now and it's proved to be a mixed blessing. The performances are exactly as John describes, the Peer Gynt exciting but too driven, the piano concerto an unidiomatic mix of Grieg, Tchaikovsky, and Rachmaninov. Fortunately we have the BIS series which is uniformly outstanding. But it's the disc's less than impressive sonics that proved to be unexpectedly helpful. Some of us have different perspectives on the sound that BIS and Chandos have produced in Bergen. I prefer BIS, which I think is more natural, but I know others prefer Chandos, which typically offers more detail. To each his own, they're both normally excellent in their different ways.

But as John said in his review the sound on this disc just didn't come to life. And as I thought about it, the sound on the last couple of Chandos discs from Bergen didn't really pop either, see: Bartok: Concerto for Orchestra, Dance Suite, Rhapsodies 1 & 2 - Gardner and Vaughan Williams: Symphony No. 7 'Sinfonia Antartica' - Davis, they just didn't sound like, for instance, Tchaikovsky: Complete Ballets - Järvi. What I discovered after going back and replaying parts of all three discs several times is that they all need a substantial boost of the volume control from the setting I usually employ for Chandos full orchestra discs. Over the years I've gotten lazy and typically just make standard adjustments that I know have been appropriate for different types of music from different labels. More fool me.