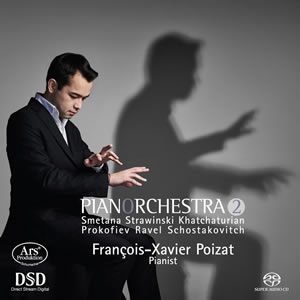 John Broggio’s plea for more (“one could hope for nothing more than a follow-up disc along similar lines.”) has been heard. Here we have Vol 2 of PianOrchestra with a further set of arrangements for the piano, taken from main stream repertoire.

I must confess that I’m not a great fan of arrangements of major orchestral works for ten fingers. However well done, it has its obvious limits. Once upon a time it was meant to bring them to wider public attention, but nowadays, with recordings readily available, I’d give preference to the originals. But that isn’t the point here. Judging François-Xavier Poizat’s playing on its proper merits, I can’t come to any other conclusion than John Broggio did about PianOrchestra - Poizat.

As John says: Poizat conveys difficulties without giving the impression as if he is struggling. Greatly helped by a highly professional recording team, Poizet’s grand piano propels the arrangements in a sure handed manner into the listening room, mimicking, so to speak, the full thrust of a symphony orchestra. This applies in particular to the two major compositions: Smetana’s Moldau, in an arrangement from Heinrich von Kàan-Albest, and Stravinsky’s Petrouchka, transposed by Theodor Szántó, which, I think, is so well done, that it could have been an original, alternative version by Stravinsky himself. (for completeness sake: Stravinsky did make a piano arrangement ‘Trois mouvements de Petrouchka’; Szántó’s is different: a suite in 5 movements).

Then there are assorted smaller pieces, which, I’m sure, will widen your scope of what’s possible in this field. The Prokofiev pieces are his own piano reductions. Arrangements were, furthermore, made by Mathew Cameron (Khachaturian) and, notably, Alexander Ghindin (laureate of the International Tchaikovsky Competition in Moscow and 2nd prize winner at International Queen Elisabeth Piano Competition in Brussels) taking care of Ravel’s ‘La Valse’, and his Belgian colleague, Florian Noack, for the two Shostakovich pieces.

Of this all, François-Xavier Poizet is your ideal and honest broker. Enjoy.

Another wonderful romp through core orchestral repertoire in glowing sound. Fans of great piano playing should not hesitate. 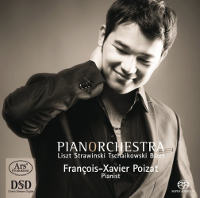