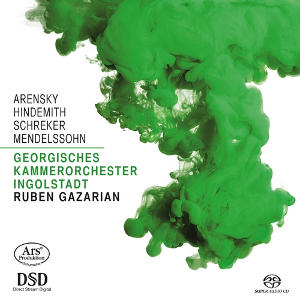 
Conducted by Ruben Gazarian, the Georgisches Kammerorchester Ingolstadt (Georgian Chamber Orchestra Ingolstadt) presents itself in this recording as a subtly formative body of sound that convinces in the experimental joy in the string symphonies of the young Mendelssohn as well as in the orchestral version of Arensky's darkly timbred second string quartet or the expressionism of the works of Hindemith and Schreker.

As its name suggests, the Georgisches Kammerorchester Ingolstadt has its origin in the former Soviet Republic of Georgia, moving in 1990 to Germany settling down as chamber orchestra in exile in the South German town of Ingolstadt. It is almost entirely made up of Georgian musicians and remains stylistically faithful to its East-European origin. Since 2010 it is recognized by the Free State of Bavaria as a ‘non-state orchestra’ fulfilling admirably its task as focal cultural music ensemble of Ingolstadt

This becomes apparent in their interpretation of Arensky’s String Quartet No. 2 dedicated “to the memory of P. Tchaikovsky” in the version for string orchestra (Op. 35A). Composed only months after Tchaikovsky’s death, its religious character is solemn and dark (considering that the quartet was written for one violin, one viola, and two cellos). The two outer movements are based on two funeral chorales of the Eastern Orthodox Memorial Service and the middle movement, literally the center point of the composition, is a series of variations taken from Legend No. 5 from Tchaikovsky’s a cappella “Sixteen Songs for Children” Op. 54. It’s a beautiful piece of music played in style by these Georgian musicians under their permanent Chef, Ruben Gazarian. The original quartet is available as a ‘filler’ on Tchaikovsky: Violin Concerto - Quint and enthusiastically received by John Broggio.

But there is more on offer. Take for instance Franz Schreker. a one-time Nazi banned composer, in recent years coming back to the concert and recording venues and present here with two short pieces: Intermezzo and Scherzo for string orchestra, of which only one or two available recordings exist, but till now none in super audio. Although part of young composers working in Vienna at the turn of the 20th century, amongst whom Schoenberg, Berg and Webern, his music remains within the limits of what may be called ‘late romantic’.

Paul Hindemith’s ‘Fünf Stücke’ for strings were written in 1920, long before he, too, was labeled ‘degenerate modernist’ by Germany’s Nazi régime. His compositional style in those days was described as ‘neo-classical’, though many considered him to be a restorer of German instrumental music of the pre-romantic era. Whatever preference one might have, these five pieces are tonal and melodious.

The final work on this disc is the tenth of Mendelssohn’s 13 string symphonies. Its youthful colour suits the strings of Ingolstadt very well. The only other version on SACD is part of the somewhat older complete set by Amsterdam Sinfonietta and Lev Markiz Mendelssohn: Complete String Symphonies - Markiz. Attractive though this is, it is in stereo only.

This present release is the third from the Georgisches Kammerorchester Ingolstadt by ARS Produktion. Like in the previous ones, the playing of this ensemble is exemplary: Full-bodied like the best Georgian wines and expertly recorded by Tonmeister Duo Schumacher & Rust. In short: A disc worth exploring for its exquisite repertoire and brilliant interpretation not readily available elsewhere. I enjoyed it very much.