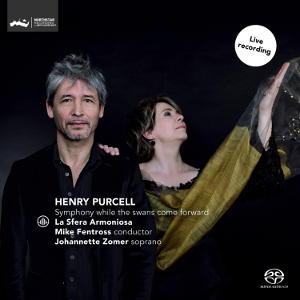 
La Sfera Armoniosa, founded in 1992, is a Dutch Baroque ensemble and orchestra specialized in the performance of music from the seventeenth and eighteenth century. Artistic director and conductor is Mike Fentross. Mike Fentross: I was really moved when I heard my orchestra play the opening bars of the Purcell. I heard a sound that was quite different to what I knew from other present-day baroque orchestras. Was this sound closer to that of Purcell's own orchestra, a sound that he may have had in mind when composing this wondrous music? In the very first chat I had about this project with Lidewij van der Voort, our new concertmaster, we talked about the modern adaptations that are often (and understandably) applied to baroque instruments nowadays, and about the possibility of going back to authentic strings (completely bare gut) and a 17th century bow hold (the French grip) for this Purcell project. As it happens, I'd had a similar conversation not long before that with Lidewei de Sterck, our principal oboist, about authentic reeds (scraped from the inside) and with Graham Nicholson, about 17th century trumpets (natural trumpets with no finger holes). These aspects, seemingly just details, have a major impact not just on the sound but also the way of playing and therefore on the way we interpret the music. We all felt the need to record this CD with these 'experimental' instruments. An orchestral sound with so much transparency and colour, a way of playing with such narrative power! I'm full of admiration for the musicians who played so beautifully and who were prepared to take up the challenge of moving away from a well-trodden path.

If you like your Purcell as it could, should or possibly even must have sounded, than this one may be for you. No wonder: La Sfera Armoniosa play on carefully chosen period instruments, bows and reeds, including newly made silver trumpets without finger holes. Instruments described by Mike Fentross (conductor and member of the orchestra) as 'experimental'. Upon first listening it immediately became clear that the ‘experiment’, together with well-judged orchestral emphasizing, meant to bring - as in those days - excitement and enjoyment to audiences of upper middle class as well as footmen, adds much to the trill of ‘reality’.

Sit back and listen to (parts of) his semi-opera: "The Prophetess or the history of dioclesian", of which many isolated excerpts, but sadly only few more or less complete versions are on record. (For those who are not in the know: A semi-opera is a mixture of opera and theatre, with alternating scenes of speech, chant and dance. Some see it as a precursor to what is now commonly called ‘musical’). Under the stimulating rattling of what for any timpanist surely must be a piece of ‘drummers delight’, joined by ‘trumpeters’ tunes’, one can almost visualize the curtains of London’s Queen’s or Dorset Garden Theatre being raised. The spectacle begins and the scene, so beautifully captured by Bert van der Wolf’s hugely satisfying recording technique, is set. The 13 fiddlers set in with ‘First Music’ with their bare gut strung instruments, sounding more ‘dolce’ than one would have expected. La Sfera Armoniosa thus roll out the red carpet of nearly 80 minutes of typical 17th century English theatrical musical life.

Capita selecta of the following theatre pieces: The Indian Queen, King Arthur and The Fairy Queen, are for many familiar territory, though one might have wished that the otherwise informative liner notes had provided more detail as to how and why separate elements from the complete scores were chosen. Whereas Jordi Savaill, in a remastered Super Audio recording, restricted himself to the orchestral suites of The Prophetess and The Fairy Queen (Purcell: The Fairy Queen & The Prophetess - Savall), Fentross includes in his survey excerpts for soprano and orchestra, similar but not quite the same as in Purcell: Victorious Love - Sampson (BIS). In that much lauded recording Carolyn Simpson sings songs from ‘The Indian Queen’ and ‘The fairy Queen’. But however pure and beautiful her voice is (and I really do like it), I find Johannette Zomer’s adapted voice and style of singing more appropriate to the spirit of 17th century stage works.

As I hinted before, not only did Fentross experiment with instruments, he does so, too, with developing musical ideas, putting inventive accents, shedding hitherto new, or, should I say, ‘old’ life into the music to arrive at what might well have been how it must have come across in the theatre in Purcell’s time. With ‘While the Swans Come Forward’ from the Fairy Queen - chosen as title of this disc - Mike Fentross gets, in my view, to the core of what he wants to share with us: His views on and interpretation of Henry Purcell stage music, bringing us as close to the original as he can, though still wondering: “Was this sound closer to that of Purcell's own orchestra, a sound that he may have had in mind when composing this wondrous music?” I’d like to believe that his perception is right. If so, than I cannot but conclude that we have here indeed a wondrously authentic account, in which all concerned take their equal part.

Given the obvious difficulties of the instruments used, the tonal quality of the orchestra is remarkably good and in its transparency undeniably different from period bands having made concessions to satisfy modern public taste. We have here a clever summary, drawn from Purcell’s end of life creative skill. What else is left to wish for?

(This being a live recording, expect some applause at the end)