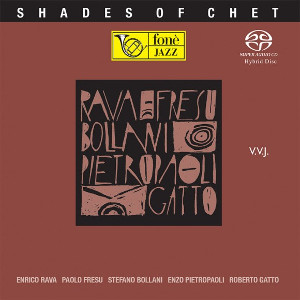 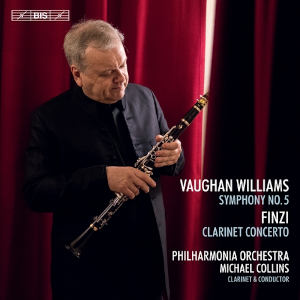 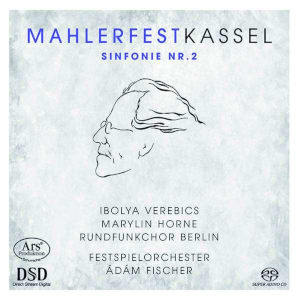 I wonder who does stream in hi-res. It would indeed be interesting to know which do, as many listen in stereo and would thus be able to profit from it. Some claim, like Deezer ...

On the issue of Challenge Classis, CC confirms that the only 'real' cover is the one on their website: https://www.challengerecords.com/products/15634480442275. We must ...

Gave mine a test - All Good too. I run a dCS spinner, which uses a transport mechanism sourced from Esoteric

Adrian, I totally agree with you about it being the music that counts. I feel very guilty about talking about streaming on this site as, having been a member of this and the ...

Just to add to the resolution debate for this release. The downloads offered for this from the likes of Presto and Qobuz are all 16/44.1 and the Qobuz stream at only 16/44.1 ...

I did not listen to any other releases in this series. As for this one: It is not unusual that reviews differ. One hundred percent objectivity does not exist, like my saying: ...

Thanks Mark, I will await your thoughts with interest. 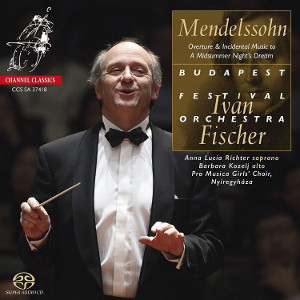 At the beginning of the liner notes that accompany this SACD of Mendelssohn's 'Overture and Incidental Music to a Midsummer Night's Dream', the conductor Iván Fischer contributes a typically quirky and tongue-in-cheek introduction to the music. He writes:

“No doubt fairies exist. Mendelssohn spoke their language well. When he considered composing music to Shakespeare's play he decided to focus on the scenes with fairies. Humans like this music. It entertains them. They are allowed to listen to this CD, too. However, we made this recording for fairies. They listen differently. This recording is full of hidden messages which they will understand”

Fischer brilliantly conveys the magical world of fairies in the opening bars of the 'Overture', thanks to the superb playing of his crack Budapest Festival Orchestra. The immaculate wind chords and ethereal string textures are testament to the remarkable quality of this orchestra displayed throughout this recording. The contrasting main allegro is unhurried and though full of deliciously pointed detail it lacks both the drive and lightness found in some other recent recordings of the piece. This is especially evident in the middle section (from 6.23) and the closing section (from 12.12) where Fischer slows the tempo to an almost funereal pace. Perhaps the fairies will understand the interpretive reason for this more than I do.

By contrast, Fischer's performance of the 'Incidental Music to a Midsummer Night's Dream' that Mendelssohn wrote at the request of King Friedrich Wilhelm IV of Prussia is marvellous in every respect. All the familiar set pieces are performed with style and aplomb. From a deft Scherzo, a dreamy and perfectly paced 'Nocturne' to a thrillingly vigorous 'Wedding March' the conductor displays a real affection for this score. Unlike some other versions on disc he includes one of the composer's brief linking passages – an 'allegro vivace' (tr. 3) – and also the mock Funeral March for Pyramus and Thisbe, delivered here with wonderful poker-faced humour by the clarinets and bassoons. For the vocal sections Fischer has engaged two very fine soloists. Both soprano Anna Lucia Richter and mezzo-soprano Barbara Kozelj have bright fresh voices and excellent diction. They are ably supported by the mellifluous Pro Musica, women's choir of Nyíregyháza.

The final pieces on this disc are of special interest as they were composed by Fanny Mendelssohn the beloved elder sister of Felix who after her marriage become known as Fanny Hensel. Both Mendelssohn siblings were musically gifted, but with the restrictive attitudes toward women prevailing at the time (and many would say continuing today) it was Felix who was destined for a musical career while his sister was prepared for life as a hausfrau. Fortunately Fanny's husband Wilhelm Hensel was supportive of her musical talent and during her short life she composed over 450 pieces of music including 250 songs, 125 piano works, four cantatas, as well as chamber music and choral works. Very few of her works were published in her lifetime, and most disappeared until gradual rediscovery during the 20th century.

The three short songs, sung radiantly here by Anna Lucia Richter, are the soaringly melismatic 'Die Mainacht' (May Night) Op.9 No.6. followed by the poignant 'Ferne' (Distance) Op 9 No.2 and finally a cheerfully flowing 'Gondolied' (Gondola Song). All three of Fanny's songs are beautifully orchestrated, but by whom? I can find no answer in the otherwise helpful liner notes where the writer Clemens Romijn refers at one point to ...'expressive harmonies on the piano'... ? (*See my comment below) Such, however, is the melodic beauty and freshness of these songs that one wishes that it had been possible to include more of them on a disc with a total playing time of 56.35.

It need hardly be stated that the recording (DSD 5.0) from engineers Jared Sacks and Hein Dekker made in the Palace of Arts, Budapest is in Channel Classic' usual house style, beyond reproach.

Texts and translations of all the vocal pieces are included.

The main works on this SACD face keen competition on both SACD and CD, but admirers of this conductor and orchestra are unlikely to be disappointed with this release.


* Since posting my review I have discovered that the orchestrations for the Fanny Mendelssohn songs are by the composer Sándor Balogh who is a trombonist in the BFO. Apparently this information was was omitted from the booklet but has been restored in subsequent printing of the liner notes.

"We made this recording for fairies. They listen differently. This recording is full of hidden messages which they will understand”

Thus spake Maestro Fischer in his introductory notes. Away with the fairies indeed! Never was a truer word spoken in jest.

We are so used to Ivan's idiosyncratic interpretations of much venerated repertory that he would surely disappoint us should he not find some new ways of phrasing, expression or interpretation of familiar scores. One suspects that loyal collectors rather enjoy the anticipation of discovering these hoped-for pearls as much as the performances themselves. Purists of course may judge him differently but this listener came out as a Fischer groupie over 20 years ago and have yet to be disappointed by any of his discs or live performances. Who could ever forget the full sized Birch tree on stage next to his podium at the RFH, London a few years ago during the BFO performance of the Pastoral Symphony?

He doesn't disappoint here in any respect either with a humorous, finally detailed and crisply emphatic performance that matches anything in the catalogue whilst the quirky bit indeed arrives in the "Funeral" March played unusually and cheekily on bassoon and clarinet.

Matched as always by a superlative recording from Jared and his team. Top marks once again.

One of my most (if not my most) favored orchestra/conductor/label relation for the past +10 years or so, finally show some bad sense of taste. Here the music is robbed of all its inherent sweeping romanticism, loving playfulness and magic moments. It is turned into a chopped up stop and go gymnastic achievement, very hard on my ears. It isn’t funny. Indeed, it’s a complete mess of what most people understand of Mendelssohn, including myself. Ivan Fischer has gone crazy with this dream play. For most people the lifespan of this recording will be 60 minutes or so - one listening. The recording will be dead after that. Not even a parenthesis in the history of recorded music. Listen before a buy!

I will give the orchestra full marks for realizing Fischer’s weird intentions, weirdness which can be found both in the details as well as in the complete miss say the nocturne is. The wonderful sound quality is of course there. High hopes fallen flat!

I'll disappoint you Tommy, I have listened to this disc four or five times already and for me it is hard to understand your criticism especially as you have not volunteered information of which alternative recordings you prefer or why.

Oh, come on! Midsummer Night's Dream was intended as a mickey-taking send up from beginning to end and Ivan's interpretation judges old Will's sense of humour perfectly. Magic mushrooms and randy peasants are a recipe for all imaginations.

I hope many buyers will trust Fischer and they will be right to do so. Gorgeous music for balmy summer evenings.

I accept of course that my views are views and not a truth of any sort. And certainly not a game involving possible disappointments. But I thought your first comment and to some extent the first review (the only one at this moment) were missing in relevant description of the music – the fact that this release is way outside the usual category. So on balance and since I have some time now - that’s why I posted. I hope it adds to this sites relevance.

My own references? Well I guess that's a relevant question. I have a whole bunch of these recordings (20+) and I will have to rely on my sound memory her. Dutoit in Montreal released a Mendelssohn disc which I really have very positive feelings for. But I think it is short on Midsummer Night Dream music and should probably not be counted for. So, the best for me will be BSO/Ozawa (DG) and BPO/Abbado (Sony) as far as i can remember. But neither is a 100% hit and BPO don’t play that well (never thought I would say that!). I will most likely find the best versions within that category of interpretations. I have a soft spot for VPO/Previn, extremely beautiful but low on energy and daringly slow – too slow actually (like parts of the Fischer release). Perhaps Kubelik in Munich… So there you have my references. Much more warmth, human emotions and yes – romanticism. More of rubato, phrasings over one bar (or more actually) and not getting stuck on beats within a bar. I want the flow, not the staccato like phrasings in too much of Fischer’s interpretation. I do believe that is more in line with what Mendelssohn is all about.

Hi Jared. Any news on when we might get the next releases of Ivan Fischer & Rachel Podger?

Almost a year since the last discs were announced, far too long for impatient people ;-)

Tower Records Japan have CCSSA41119 - a 2-SACD set of Podger playing violin transcriptions of the Bach Cello Suites, and CCSSA38019 Mahler Symphony 7 Fischer both listed as scheduled for 15.3 2019 (Mahler) and 30.4.2019 (Podger) release in Japan - presumably something broadly similar in the West.

That's wonderful, thanks for the information. Some excitement in the air.

Official international release date for the Mahler 7 according to Channel website is March 29, 2019. However you can get it right now direct from Channel, if you want.

I already have it as I ordered from the Channel website and it arrived a couple days ago. It's really good. I imagine it will be a month before it gets listed on the site here.

My only objection to this recording (aside from leaving out a few numbers, which makes it incomplete) is the choice of singers. I know Anna Lucia Richter is currently getting lots of attention and recordings, but her nails-on-a-chalkboard voice really grates me. The sections with her are unlistenable. Otherwise, Fischer's take is lovely.