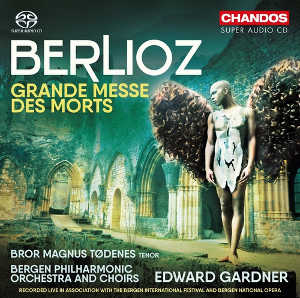 
With this surround-sound recording of Berlioz’s Requiem, Edward Gardner and the Bergen Philharmonic Orchestra tackle the infinite and the immeasurable.

All the grandiose, striking beauty of the Requiem’s large-scale ceremonial is encapsulated by first-class vocal and orchestral forces, fully utilising the spatial possibilities of Grieghallen in Bergen. The matching of space and sonority was one of Berlioz’s lasting obsessions, one experience in St Paul’s Cathedral in London throwing Berlioz into a delirium of emotion from which he took days to recover. His Grande Messe des morts, notorious for its requirement of four brass bands in addition to a large orchestra and chorus, taken here from live concerts, has often been seen as one of the most emotionally powerful works of its kind.

Setting a solemn and austere, even ascetic text, the music is not that of an orthodox believer but of a visionary, inspired by the dramatic implications of death and judgement.

Recorded live during the Bergen International Festival from 21 to 24 May, 2018 at the Grieghallen, Bergen, Norway, 24/96

Providing commentary on music can be "tricky" business. I purchased this new recording of Berlioz: Grande Messe des morts as conducted by Gardner to compare it with the version I own by Norrington. I was thinking, okay this is good. I watched the full concert (available on Vimeo). Chandos lists several positive reviews. But, before I decided to add a comment here I looked at other reviews. Goodness! Several reviewers absolutely hated this performance. I read one review in which the reviewer took Gardner to task for every single part of the performance. The orchestra, choir, conducting, I mean everything was bad or wrong.

I do not have the expertise to give you a recommendation. I thought it was good. Other reviewers thought so as well. But, there were still other reviewers who absolutely hated it. In the case of this album, I feel a bit timid. As I said, the entire performance is available on Vimeo. You may judge for yourself. It did not cost me anything to watch it.