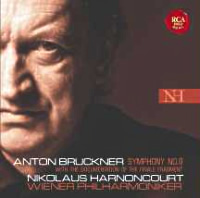 This is arguably the best Bruckner 9 currently available on SACD. The other key competing issue is Bruckner: Symphony No. 9 - Wand - this is just as satisfying but with a different overall concept and it has a couple of advantages over the Wand:
1) it's cheaper and more readily available for those not living in Japan!
2) the accompanying fragments of the finale and talk are fascinating.

The first disc of the set is devoted to a talk about and performance of the extant fragments of the symphony's finale (there are two expositions, one in German the other in English) which total about 35 minutes worth of discussion/performance in each language. Sadly, this is presented as a RBCD but it is still fascinating to hear what has been discovered - some 526 bars of music in total. Will it ever be completed - well, if finds of the autograph keep coming forwards who knows...

Like a superb document of Karajan's art (documented on 25/7/1976, RBCD only) this account of the symphony comes from the Salzburg Festival with the Wiener Philharmoniker, although this was taped from several concerts. Another difference is the choice of the production team to excise the applause that must have followed - Karajan's audience were clearly deeply moved and do not respond with a knee-jerk, ovation and I'm sure a similar reaction would have happened for Harnoncourt. Their overall timings are similar (about 2 minutes faster than Wand in the first movement and 1 minute faster in the Adagio), as is the conception. Climaxes are titanic in sound and there is no doubting the sheer size and commitment of the orchestral response to the music and the direction of Harnoncourt.

Broadly speaking, Harnoncourt and Karajan, without completely sacrificing the emotional element, concentrate on the drama revealing itself through the structure of the work rather than the structure cloaked in mystery (which is my way of thinking about the Wand). Rubato are subtle and never disturb the overall pulse of the music; this pays huge dividends over the whole work where the momentum becomes simply irresistible. Respect comes to mind with Harnoncourt and he attempts no revisionist outlook for Bruckner here, much to the credit of both himself and Bruckner. Details are seamlessly moulded into a white-hot frame that surrounds moments of (still intense) relaxation. Even though Harnoncourt clearly is very interested and excited by the discovery of so much of the finale, this has not altered his conception of the symphony as a 3 movement work. The sense of becalmed passion is still foremost in the listeners experience as the work draws to a close and the atmosphere is one where some minutes silence is needed to gather ones thoughts - perhaps it *was* a good idea of the production to excise the applause after all...

The one problematic area is the sound - the Großes Festspielhaus is notoriously dry and is largely unchanged in character since its opening. However, once one is accustomed to the sound, the detail obtained and the sound of the WP is really very good. Fortunately the audience is pretty much silent throughout but as the notes to the first and second movements evaporate, they do stir quite clearly!

Not a demonstration disc but a highly recommended, fascinating and compelling account of one of the C19 last great symphonies. 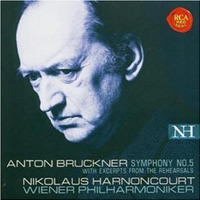