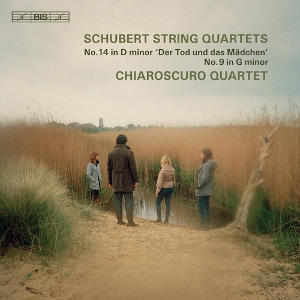 
One of the truly iconic works in the repertoire for string quartet, Franz Schubert’s Death and the Maiden is named after the song which has lent its theme to the second movement. At the end of Matthias Claudius’s poem, which Schubert had set as a 20-year-old in 1817, Death cradles the Maiden in his bony embrace. And her fear, in the first verse, of encountering his tomb-cold touch is mirrored by his desire for her in the second. In Schubert’s life time, death was a constant presence in everyday life and even a young person like himself would have encountered it at close quarters –in fact, his own mother had passed away when he was only 15.

When Schubert returns to the song in 1824 and starts work on the string quartet, death has nevertheless grown even more real: in the meantime he has become acquainted with pain and disease during the bouts of the syphilis that he knows will kill him. He turns the song into a set of variations, preceding it with a ferocious Allegro, and following it with a Scherzo and a Finale that have been described as ‘the dance of the demon fiddler’ and ‘a dance with death’. The acclaimed Chiaroscuro Quartet performs the work on gut strings, which brings out the vulnerability and desperation even further. The players then let us down gently with the youthful String Quartet No. 9 in G minor, a work in which the minor key offers Schubert the opportunity to play with light and shadows, rather than full-scale drama.

Recorded in March 2017 at the Deutschlandfunk Kammermusiksaal, Cologne, Germany, 24/96

As fine as their other recordings have been, this disc marks new heights for the Chiaroscuro Quartet to these ears.

In the great slow movement set of variations, the Chiaroscuro place the emphasis very much on the "con moto" instruction, whereas the Mandelring place themselves very much in the Busch school. Each has their virtues and there is a certain majesty, expressive power and weight that the Mandelring bring that is eschewed here; what the Chiaroscuro bring in its place is a much more tonally and dynamically varied account. Those who generally favour HIP will likely find themselves favouring the Chiaroscuro account which is counter to those (Mandelring included) that allow Romanticism to dominate the interpretative conception.

The Scherzo has repeats included both before and after the Trio, both taken at a pace that allows a good balance between forward momentum and expressive freedom. The finale, as in all good accounts, reveals the Chiaroscuro able to turn dynamics on their head without breaking the momentum of this irrepressible dance. The gut strings allow the scampering of the motoric accompaniment above or within the lyrical second subject and enormous credit must be given to all for finding the space to make the (subtle) rubato) they employ integrate so naturally into their interpretative conception. The eruption of the final coda is as convincing as any that can be heard and caps a superb account.

The earlier quartet follows and is given, musical content allowing, a similarly engaged reading from the Chiaroscuro Quartet. If anything, the Chiaroscuro bring more interpretative flair to this score (arguably because more is needed). The same interpretative characteristics of using a clear, pure timbre with vibrato employed as an musical device are present here and benefit the music hugely; there is no attempt to "gild the lily", just an honest, highly musical presentation of Schubert's output. One feature of such corporately uniform approach to music making is that there is less "spotlighting" of individual lines than favoured by many traditional accounts; this is as close as one can find to any sort of drawback for these superlative accounts.

The engineering is from the top drawer of BIS offerings; the sound is so tangible one feels it is possible to stand up from the ideal seat in the venue, wander over and converse with the Chiaroscuro.

In summary, this must be among the finest accounts of Death and the Maiden on disc and should be high on the list of music lovers (Schubert especially) to acquire and enjoy.