Recorded between March and July of 1968 at Olympic Sound Studios in London, mixed at Sunset Sound in Los Angeles, Beggars Banquet was the first Stones album produced by Jimmy Miller, and marks the start of what is considered their most prolific album era.

The Rolling Stones Beggars Banquet (50th Anniversary Edition) limited edition hybrid SACD package is designed to look like a miniaturized replica of the 12” gatefold double-vinyl edition, sized to be a convenient 7” gatefold, and contain 2 hybrid SACDs, a flexi disc and expanded packaging elements exclusive to this edition. This bespoke packaging is manufactured in Japan and is of the highest quality to match the SACD audio. Special elements of the package include: replica packshots of two Japanese 7” single picture sleeves (“Jumpin’ Jack Flash” and “Street Fighting Man”) and both versions of the Beggars Banquet sleeve art are included.

Unboxing this 50th Anniversary Edition got me musing whether this treatment of the album is somewhat at odds with the artistic statement that the album was making. Maybe a simple brown paper bag (perhaps a bit scuzzed up!) would have been more in keeping with the aesthetic the band were aiming for when the album was first released. I don't know the answer, but it is clear that things have changed a lot in the last 50 years.

It is clear though that Bob Ludwig (Responsible for 'mastering and sound restoration') has fussed over the audio and done a remarkable job. This is no flat transfer, but a detailed workover of these very old tapes. There is a bit of compression, but it still sounds very good at higher volumes.

There is a wide soundstage and lots of air between instruments. It is also pretty full sounding. Amazingly it also doesn't sound particularly digital, given all the tinkering that must have gone on it the digital realm. 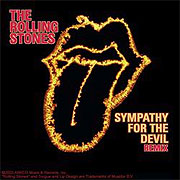