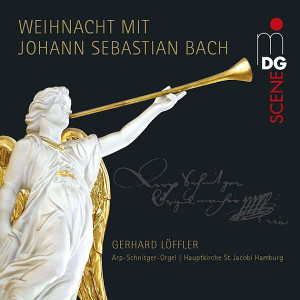 
Christmas Spirit
“Christmas with Bach”: Gerhard Löffler, the organist at the Church of St. James in Hamburg, has selected this title for his MDG CD debut. And to it we may add: “And with Arp Schnitger.” After all, Schnitger’s masterpiece of organ design in St. James is not only the largest instrument by this Northern German organ builder, whose death three hundred years ago is being commemorated in 2019, but also has what qualifies as the most important extant original pipework from the sixteenth and seventeenth centuries. With these resources it very much makes its presence felt in the music and interpretation. And when captured in magnificent three-dimensional sound on this Super Audio CD, it is guaranteed to spread the Christmas spirit throughout the year.

Alpha and Omega
Löffler’s program begins in an Advent atmosphere with the archaic character of the “Fuga sopra il Magnificat.” How impressively Mary’s hymn of praise appears in the pedal at the end! The three arrangements of “Nun komm, der Heiden Heiland” from the Leipzig Chorales form the logical continuation inasmuch as they number among Bach’s most beautiful chorale settings of all. It was not without reason that Ferruccio Busoni was inspired to arrange the first stanza for the piano.

Heart and Mind
A marvelously realized idea: between the festive Prelude in C major and the magnificent Fugue going along with it in BWV 545, Löffler inserts the Largo from the Trio Sonata in C major, a work with sorrow of supernatural sublimity that goes straight to the heart. This serves to ring in the Christmas event: five chorales from the Orgelbüchlein convey the meditative atmosphere created in the proper pastoral mode in the four movements of the “Pastorella.”

Chorale Summit
The five Canonic Variations on Luther’s chorale “Vom Himmel hoch, da komm ich her” number among Bach’s most magnificent contrapuntal achievements. It is fascinating to hear how this master succeeds in solving difficult problems of strict canonic texture with various intervals, augmentations, and diminutions – and a listening feast that comes to a superb conclusion with the Prelude and Fugue in C major BWV 547.